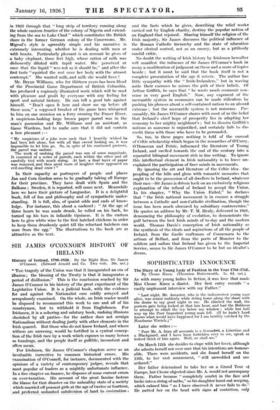 " THE tragedy of the Union was that it inaugurated an era of illusion ; the blessing of the Treaty is that it inaugurates a period of disillusion." This is the conclusion reached by Sir James O'Connor in his history of the great experiment of the Legislative Union. It is a judicial book, with the evidence for and against the Nationalist case coldly arrayed and scrupulously examined. On the whole, an Irish reader would he disposed to recommend this work to one and all of his countrymen, but to withhold it from Englishmen. For Irishmen, it is a sobering and salutary book, undoing illusions cherished by all parties—for the author does not arraign Nationalism without dealing justly with other elements in the Irish quarrel. But those who do not know Ireland, and whose withers are unwrung, would be• fortified in a cynical concep- tion of the Irish race by a work which expOses so many heroes as humbugs, and the people itself as gullible," inconstant and often mean.

For Irishmen, Sir James O'Connor's chapters serve as an invaluable Corrective to common historical errors. His 'examination of O'Connell, for instance, documented with the opinions of a variety of contemporary judges, reveals that most popular of leaders as a mightily unfortunate influence. In a fine chapter on finance, he disposes of some current errors on over-taxation. His account of the great famine fastens the blame for that disaster on the unhealthy state of a society which married off peasant girls at the age of twelve of fourteen, and preferred unlimited subdivision of_lami ta_ emigration and the facts which he gives, describing the relief works carried out by English charity, destroy the popular notion of an England that rejoiced. Sharing himself the religion of the Irish majority, Sir James discusses the political influence of the Roman Catholic hierarchy and the state of education under clerical control, not as an enemy; but as a pitilessly candid critic.

No doubt the writing of Irish history by Irishmen hereafter will manifest the influence of Sir James O'Connor's book in many a modification of judgment on these and a score of topics beside ; but it must be said that the book itself is not a complete presentation of the age it covers. The author has little sympathy with the " Irish-Irelanders," but in waving aside their excesses he misses. the pith of their beliefs. Of Arthur Griffith, he says that " he wrote much economic non- sense in very good English." Now, any exponent of the mercantile system in economics can be made ridiculous by pushing his phrases about a self-contained nation to an absurd extreme ; but the mercantile system is not nonsense. Pre- sumably, Sir James O'Connor shares with most of us the belief that Ireland's chief hope of prosperity lies in adapting her economy to her mighty neighbour's ; but to dismiss Griffith's notions as nonsense is unjustified, and certainly fails to dis- credit them with those who have to be persuaded.

So, too; in these pages nothing is told of the current of Celtic scholarship which began in the researches of O'Curry, O'Donovan and Petrie, influenced the literature of Young Ireland, and swelled towards the end of the century into a separatist bilingual movement rich in fine writing. To ignore this intellectual element in Irish nationality is to leave un- explained the participation of finer minds in movements.

By ignoring the art and literature of the Celtic idea—the peopling of the hills and glens with romantic memories that ought to be the possession of all dwellers in Ireland, whatever their race—Sir James is driven back on an exclusively religious explanation of the refusal of Ireland to accept the Union. In his chapter, " Why the Union Failed," he declares that " the Irish national movement is in essence a struggle between a Catholic and non-Catholic civilization, though the issue has been much obscured by subsidiary controversies." He quotes an address by Mr. T. M. Healy, delivered in 1921; denouncing the philosophy of evolution, to demonstrate the gulf between the best Irish minds of to-day and the modern world. Thomas Davis's conception of Irish nationality as the synthesis of the ideals and aspirations of all the people of Ireland, from the Gaelic craftsman of Connemara to the artisan of Belfast, and from the poets of Munster to the soldiers and sailors that Ireland has given to the Imperial Service, seems to Sir James O'Connor to be but an idealist's dream.