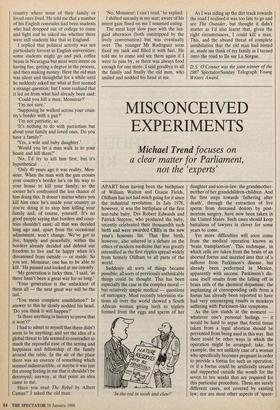 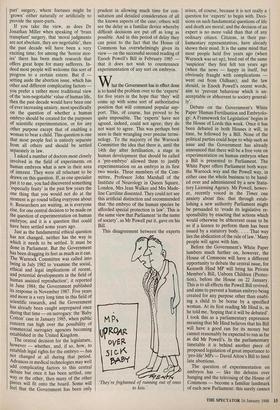 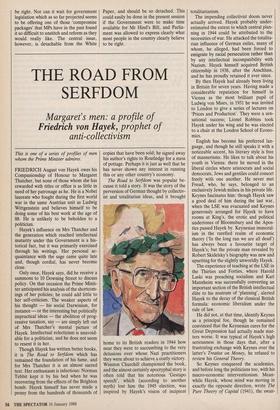 a clear matter for Parliament, not the 'experts'

APART from having been the birthplace of William Walton and Gracie Fields, Oldham has not had much going for it since the industrial revolution. In July 1978, however, it was the birthplace of the first test-tube baby. Drs Robert Edwards and Patrick Steptoe, who produced the baby, recently celebrated their thousandth such birth and were awarded CBEs in the new year's honours list. That first birth, however, also ushered in a debate on the ethics of modern medicine that was greatly intensified as the first ripples spread widely from homely Oldham to all parts of the world.

Suddenly all sorts of things became possible; all sorts of previously unthinkable things could be thought. This has been especially the case in the complex moral — but relatively simple medical — questions of surrogacy. Most recently television sta- tions all over the world showed a South African woman giving birth to triplets formed from the eggs and sperm of her In-the-red in tooth and claw?' daughter and son-in-law: the grandmother- mother of her grandchildren-children. And the first steps towards 'fathering after death', through the extraction of live sperm from deceased donors by post- mortem surgery, have now been taken in the United States. Such cases should keep battalions of lawyers in clover for some years to come.

Yet more difficulties will soon come from the medical operation known as 'brain transplantion'. This technique, in which cells are taken from the brain of an aborted foetus and inserted into that of a sufferer from Parkinson's disease, has already been performed in Mexico, apparently with success. Parkinson's dis- ease itself results from the falling off in brain cells of the chemical dopamine; the implanting of corresponding cells from a foetus has already been reported to have had very encouraging results in monkeys suffering with Parkinson-like symptoms.

As the law stands at the moment — whatever one's personal feelings — it would be hard to argue that foetal tissue taken from a legal abortion should be prevented from being used in this way. But there could be other ways in which the operation might be arranged: take, for example, the not unlikely case of a woman who specifically becomes pregnant in order to provide a foetus for such an operation; or if a foetus could be artificially created and supported outside the womb for the seven to ten weeks that are required for this particular procedure. These are surely different cases, not covered by existing law; nor are most other aspects of 'spare- part' surgery, where foetuses might be 'grown' either naturally or artificially to provide the spare-parts.

If you take the view, as does Dr Jonathan Miller when speaking of 'brain transplant' surgery, that 'moral judgments are not absolute, they are negotiable', then the past decade will have been a very exciting time; for among the 'horror stor- ies' there has been much research that offers great hope for many sufferers. In- deed most people will welcome this sort of progress to a certain extent. But if — setting aside the abortion issue, which has other and different complicating factors — you prefer a rather more traditional view of the 'non-negotiable' value of human life, then the past decade would have been one of ever increasing anxiety, most specifically on the question of whether a human embryo should be created for the purposes of scientific experimentation, or for any other purpose except that of enabling a woman to bear a child. This question is one that most people feel is entirely separate from all others and should be settled separately in law. I asked a number of doctors most closely involved in the field of experiments on human embryos what is new in their area of interest. They were all reluctant to be drawn on this question. If, as one specialist Put it to me, you had discovered something 'especially fruity' in the past few years the one thing that you would not do at the moment is go round telling everyone about it. Researchers are waiting, as is everyone else, for one central decision to be made on the question of experimentation on human embryos; and it is a question that could have been settled some years ago. Just as the fundamental ethical question has not changed, neither has the way in Which it needs to be settled. It must be done in Parliament. But the Government has been dragging its feet as much as it can. The Warnock Committee was called into being in July 1982 to 'examine the social, ethical and legal implications of recent, and potential developments in the field of human assisted reproduction'; it reported in June 1984; the Government published its response in November 1987. Five years and more is a very long time in this field of scientific research, and the Government has already been caught unprepared once during that time — on surrogacy: the 'Baby Cotton' case in January 1985, when public concern ran high over the possibility of commercial surrogacy agencies becoming established in the United Kingdom. The central decision for the legislature, however — whether, and, if so, how, to establish legal rights for the embryo — has not changed at all during that period. Advances in medical technologies may well add complicating factors to this central debate but once it has been settled, one way or the other, then many of the other Pieces will fit onto the board. Some will feel that the Government has been only prudent in allowing much time for con- sultation and detailed consideration of all the known aspects of the case; others will see the delay as a familiar device whereby difficult decisions are put off as long as possible. And in this period of delay they can point to the fact that the House of Commons has overwhelmingly given its view — on the successful second reading of Enoch Powell's Bill in February 1985 — that it does not wish to countenance experimentation of any sort on embryos.

What the Government has in effect done is to hand the problem over to the 'experts' for five years in the hope that 'they' will come up with some sort of authoritative position that will command popular sup- port. This, of course, has proved to be quite impossible. The 'experts' have not agreed, indeed, could not agree; they do not want to agree. This was perhaps best seen in their wrangling over precise termi- nology. To the majority of the Warnock Committee the idea that there is, until the 14th day after fertilisation, a stage in human development that should be called a 'pre-embryo' allowed them to justify experimentation on an embryo in its first two weeks. Three members of the Com- mittee, Professor John Marshall of the Institute of Neurology in Queen Square, London, Mrs Jean Walker and Mrs Made- line Carriline dissented. They could not see this artificial distinction and recommended that 'the embryo of the human species be afforded special protection in law'. This is the same view that Parliament 'in the name of society', as Mr Powell put it, gave on his Bill.

This disagreement between the experts 'They're frightened of running out of ones to kiss.' arises, of course, because it is not really a question for 'experts' to begin with. Deci- sions on such fundamental questions of life and death are moral; and the decision of an expert is no more valid than that of any ordinary citizen. Citizens, in their par- liamentary representatives, have already shown their mind. It is the same mind that most people held five years ago (when Warnock was set up), bred out of the same 'suspicion' they first felt ten years ago (when the news — happy in itself, but obviously fraught with complications — went out from Oldham); and the law should, in Enoch Powell's recent words, aim to 'prevent behaviour which is un- acceptable or abhorrent to society general- ly'.

Debate on the Government's White Paper 'Human Fertilisation and Embryolo- gy; A Framework for Legislation' begins in the House of Lords this week. Once it has been debated in both Houses it will, in time, be followed by a Bill. None of the political parties could hope to whip such an issue and the Government has already announced that there will be a free vote on experimentation on human embryos when a Bill is presented to Parliament. The White Paper offers Parliament both ways: the Warnock way and the Powell way, in either case the whole business to be hand- ed over and administered by a new Statu- tory Licensing Agency. Mr Powell, howev- er, recently voiced in the Times one anxiety about this: that through estab- lishing a new authority Parliament might be persuaded to 'evade its legislative re- sponsibility by enacting that actions which would otherwise be abhorrent cease to be so if a licence to perform them has been issued by a statutory body. . . . That way lies the abdication of the rule of law.' Many people will agree with him.

Before the Government's White Paper lumbers much further on, however, the House of Commons will have a different opportunity to debate the central issue, for Kenneth Hind MP will bring his Private Member's Bill, Unborn Children (Protec- tion), before the House on 22 January. This is to all effects the Powell Bill revived, and aims to prevent a human embryo being created for any purpose other than enabl- ing a child to be borne by a specified woman. At its first reading Mr Hind is, as he told me, 'hoping that it will be debated'. I took this as a parliamentary expression meaning that Mr Hind believes that his Bill will have a good run for its money but cannot reasonably be expected to run as far as did Mr Powell's. In the parliamentary timetable it is behind another piece of proposed legislation of great importance to 'pro-life' MPs — David Alton's Bill to limit late abortions.

The question of experimentation on embryos has — like the debates over hanging and the televising of the House of Commons — become a familiar landmark of each new Parliament: this surely cannot be right. Nor can it wait for government legislation which as so far projected seems to be offering one of those 'compromise packages' that MPs have in the past found it so difficult to unstitch and reform as they would really like. The central issue, however, is detachable from the White Paper, and should be so detached. This could easily be done in the present session if the Government were to make time available for Mr Hind's Bill, and Parlia- ment was allowed to express clearly what most people in the country clearly believe to be right.