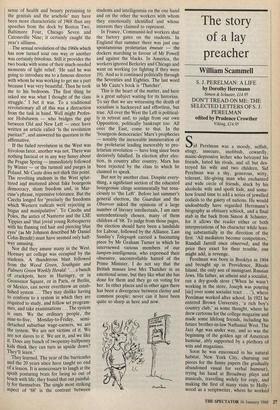 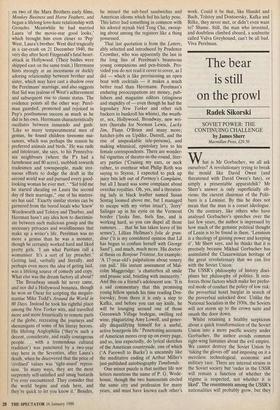 The story of a lay preacher

DON'T TREAD ON ME: THE SELECTED LETTERS OF S. J. PERELMAN edited by Prudence Crowther

Sid Perelman was a moody, selfish, stingy, insecure, snobbish, cowardly, manic-depressive lecher who betrayed his friends, hated his rivals, and all but des- troyed his wife and two children. Sid Perelman was a shy, generous, witty, tolerant, life-giving man who enchanted and wide circle of friends, stuck by his alcoholic wife and spoilt kids, and some- how found time to add a series of jewelled codicils to the gaiety of nations. He would undoubtedly have regarded Herrmann's biography as obituary schlock, and a final stab in the back from Simon & Schuster, for it allows the reader either or both interpretations of his character while lean- ing substantially in the direction of the first. 'All mediators become competitors,' Randall Jarrell once observed; and the price they exact for their trouble, one might add, is revenge.

Perelman was born in Booklyn in 1904 and brought up in Providence, Rhode Island, the only son of immigrant Russian Jews. His father, an atheist and a socialist, ran a dry-goods store (When he wasn't working in the store, Joseph was pouring [sic] over some socialist tract . . .'), where Perelman worked after school. In 1921 he entered Brown University, 'a rich boy's country club,' as some thought, where he drew cartoons for the college magazine and made some lifelong friends, including his future brother-in-law Nathanial West. The Jazz Age was under way, and so was the beginning of the golden age of American humour, ably supported by a plethora of wits and magazines.

Soon he was ensconced in his natural habitat, New York City, churning out pieces for the funny papers (he gradually abandoned visual for verbal humour), trying his hand at Broadway plays and musicals, _travelling widely for copy, and making the first of many visits to Holly- wood as a scriptwriter, where he worked on two of the Marx Brothers early films, Monkey Business and Horse Feathers, and began a lifelong love-hate relationship with Groucho. Meanwhile he had married Laura 'of the movie-star good looks,' which brought him even closer to 'Pep' West, Laura's brother. West died tragically in a car-crash on 21 December 1940, the very day after Scott Fitzgerald's fatal heart- attack in Hollywood. (Their bodies were shipped east on the same train.) Herrmann hints strongly at an incestuous or darkly adoring relationship between brother and sister, which may have cast a shadow over the Perelmans' marriage, and also suggests that Sid was jealous of West's achievement and subsequent rise to classic status. The evidence points all the other way: Perel- man guarded, promoted and rejoiced in Pep's posthumous success as much as he did in his own. Herrmann characteristically oscillates between innuendo and gush: 'Like so many temperatmental men of genius, he found children tiresome nui- sances, which was perhaps the reason he preferred animals and birds.' He was rude and intolerant, she says, to his Pennsylva- nia neighbours (where the P's had a farmhouse and 80 acres), snobbish towards tradesmen and townspeople, made stre- nuous efforts to dodge the draft in the second world war and pursued every good- looking woman he ever met. "Sid told me he started cheating on Laura the second day of their marriage," one of his mistres- ses has said.' Exactly similar stories can be garnered from the bored locals who 'knew' Wordsworth and Tolstoy and Thurber, and Herrman hasn't any idea how to discrimin- ate between such malicious gossip and the necessary privacies and worldlinesses that make up a writer's life. Perelman was no more a genius than he was a monster, though he certainly worked hard and liked pretty girls. 'I am what Puritans call a womaniser. It's a sort of lay preacher.' Getting laid, verbally and literally, and perhaps even more the idea of geting laid, was a lifelong source of comedy and copy. What else was the dream factory all about?

The Broadway smash hit never came, and nor did a Hollywood bonanza, though he won an Oscar for scripting the megalo- maniac Mike Todd's Around the World in 80 Days. Instead he took his rightful place among the New Yorker wits, and travelled more and more frenetically to remote parts of the globe, recreating the journeys and shenanigans of some of his literay heroes. His lifelong Anglophilia ('they're such a decent, considerate, and really courageous people. . . with a tremendous cultural tradition') was punctured by a two-year stay here in the Seventies, after Laura's death, when he discovered that the price of 'civilised' values was light-assed' repres- sion. 'In many ways, they are the most surpremly self-satisfied and smug bastards I've ever encountered. They consider that the world begins and ends here, and they're quick to let you know it.' Besides, he missed the salt-beef sandwiches and American idioms which fed his larky pose. This latter had something in common with his adored mynah bird Tong Cha, swoop- ing about among the registers like a thing possessed.

That last quotation is from the Letters, ably selected and introduced by Prudence Crowther, who was apparently the last in the long line of Perelman's beauteous young companions and pen-friends. Pro- vided you do not read it cover to cover, as I did — which is like provisioning an open boat with cocktails — it makes a much better read than Herrmann. Perelman's enduring preoccupations are money, pub- lishers and magazine editors (stinginess and stupidity of — even though he had the legendary New Yorker and other rich backers to bankroll his whims), the weath- er, sex, Hollywood, Broadway, new wri- ters (hurrahs for Norman Lewis, Lucky Jim, Flann O'Brien and many more; hatchet-jobs on Updike, Durrell, and the rise of unspeakable tele-persons), and making whimsical, epistolary love to his female correspondents. There are wonder- ful vignettes of theatre-in-the-round, liter- ary parties ('Craning my ears, or neck rather, to overhear what Philip Roth was saying to Styron, I expected to pick up juicy bits left out of Portnoy's Complaint, but all I heard was some complaint about overdue royalties. Oh, yes, and a threaten- ing lady in black leather named Susan Sontag loomed above me, but I managed to escape with my virtue intact'), 'Jerry' Salinger up in his eyrie on the Vermont border (gooks fine, feels fine, and is working hard, so you can dispel all those rumours. . . that he has taken leave of his senses'), Lillian Hellman's folie de gran- deur ('it is my considered opinion that Lil has begun to confuse herself with George Sand'), and much, much more. His doctor- al thesis on Bonjour Tristesse, for example: 'A 17-year-old's palpitations about venery can pall.' His instant assessment of Mal- colm Muggeridge: 'a chatterbox all smile and prussic acid, bristling with insincerity.' And this on a friend's adolescent son: 'It is a sad commentary that this promising young fellow spends his time reading Dos- toevsky; from there it is only a step to Kafka, and before you can say knife, he will be lounging around one of those Greenwich Village bodegas, swilling red wine, plagiarizing Amy Lowell, and gener- ally disqualifying himself for a useful, active bourgeois life.' Penetrating accounts of American mores crop up on every page, and so, less expectedly, do lyrical sketches of the American countryside, one of which CA Farewell to Bucks') is uncannily like the meditative ending of Arthur Miller's just-published autobiography Timebends.

One minor puzzle is that neither life nor letters mentions the name of P. G. Wode- house, though the two humourists circled the same city and profession for many years, and must have known each other's work. Could it be that, like Handel and Bach, Tolstoy and Dostoevsky, Kafica and Rilke, they never met, or didn't even want to? Shame. Still, the man who invented, and doubtless climbed aboard, a soubrette called Vulva Greyhound, can't be all bad. Viva Perelman.