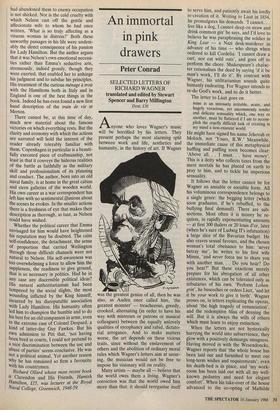 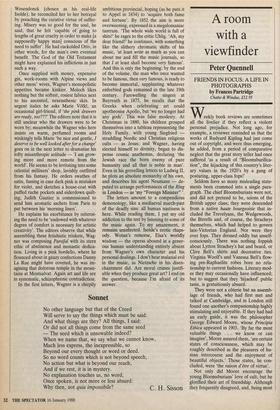 An immortal in pink drawers

SELECTED LETTERS OF RICHARD WAGNER translated and edited by Stewart Spencer and Barry Millington Dent, BO Anyone who loves Wagner's music will be horrified by his letters. They present perhaps the most alarming split between work and life, aesthetics and humanity, in the history of art. If Wagner was the greatest genius of all, then he was also, as Auden once called him, 'the greatest monster' — treacherous, greedy, crooked, alternating (in order to have his way with mistreses or patrons or musical colleagues) between the equally unlovely qualities of sycophancy and rabid, dictato- rial arrogance. And to make matters worse, the art depends on these vicious traits, since without the enslavement of others and the abolition of ordinary moral rules which Wagner's letters aim at secur- ing, the musician would not be free to impose his visionary will on reality. Many artists — maybe all — believe that the world owes them a living. Wagner's conviction was that the world owed him more than that: it should reorganise itself to serve him, and patiently await his lordly re-creation of it. Writing to Liszt in 1854, he promulgates his demands. 'I cannot. . . live like a dog, I cannot sleep on straw and drink common gin' he says, and I'd love to believe he was paraphrasing the soldier in King Lear — a Nazi desk-murderer in advance of his time — who shrugs when ordered to kill Cordelia: `I cannot draw a cart, nor eat wild oats', and goes off to perform the chore. Shakespeare's chaiac- ter rationalises the deed by saying 'if it be man's work, I'll do it'. By contrast with Wagner, his utilitarianism sounds quite humanly endearing. For Wagner intends to re-do God's work, and to do it better.

The letter to Liszt goes on

mine is an intensely irritable, acute, and hugely voracious, yet uncommonly tender and delicate sensuality which, one way or another, must be flattered if I am to accom- plish the crkielly difficult task of creating in my mind a non-existent world.

He might have signed his name Jehovah or Moloch, not 'Yours, R.W.' Meanwhile, the immediate cause of this metaphysical huffing and puffing soon becomes clear: `Above all. . . I must. . . have money'. This is a deity who collects taxes from the mere mortals he has placed on earth to pray to him, and to tickle his imperious sensuality.

It follows that the letter cannot be for Wagner an amiable or sociable form. All his voluminous correspondence belongs to a single genre: the begging letter (which soon graduates, if he's rebuffed, to the bullying final demand). There are sub- sections. Most often it is money he re- quires, in rapidly exponentiating amounts — at first 300 thalers or 20 louis d'or, later (when he's sure of Ludwig II's infatuation) a large slice of the Bavarian budget. He also craves sexual favours, and the chosen woman's total obeisance to him: 'never betray me', he writes to his first wife Minna, 'and never force me to share you with another man. . . Do you hear? Do you hear?' But these exactions merely prepare for his abrogation of all other existences, which can be tolerated only as tributaries of his own. 'Perform Lohen- grin', he beseeches or orders Liszt, `and let it be your work to give it birth'. Wagner proses on, in letters explicating the operas, about 'the high tragedy of renunciation', and the redemptive bliss of denying the will. But it is always the wills of others which must learn to enjoy extinction.

When the letters are not hysterically harrying the world into subservience, they glow with a positively demiurgic smugness. Having moved in with the Wesendoncks, Wagner reports that 'the whole house has been laid out and furnished to meet our long-term wishes and requirements'; even his death-bed is in place, and 'my work- room has been laid out with all my well- known pedantry and need for elegant comfort'. When his take-over of the house advanced to the co-opting of Mathilde Wesendonck (chosen as his real-life Isolde), he reconciled her to her betrayal by preaching the curative virtue of suffer- ing. Misery was so good for the soul, he said, that he felt `capable of going to lengths of great cruelty in order to make [a supposedly happy man] conscious of the need to suffer'. He had cuckolded Otto, in other words, for the man's own eventual benefit. The God of the Old Testament might have explained his inflictions in just such a way.

Once supplied with money, expensive gin, work-rooms with Alpine views and other mens' wives, Wagner's monopolistic appetites became kinkier. Moloch likes nothing but the softest, rosiest fabrics next to his anointed, neurasthenic skin. In urgent italics he asks Marie Volk!, an occasional girl-friend, if 'the pink drawers are ready, too???' The editors note that it is still unclear who the drawers were to be worn by; meanwhile the Wagner who here insists on warm, perfumed rooms and winkingly tells Marie `be nice and gentle, I deserve to be well looked after for a change' goes on in the next letter to dramatise his lofty misanthropic solitude — 'I am grow- ing more and more remote from the world'. He seems to be levitating into some celestial milliners' shop, lavishly outfitted from his fantasy. He orders swathes of satin, fussing in case dark pink is mistaken for violet, and sketches a house-coat with puffed ruche pockets and eiderdown quilt- ing; Judith Gautier is commissioned to send him aromatic sachets from Paris to put between his `morning linen'.

He explains his exorbitance by reiterat- ing the need to be 'endowed with whatever degree of comfort is necessary for artistic creativity'. The editors observe that while assembling these fetishistic trinkets, Wag- ner was composing Parsifal with its stern ethic of abstinence and monastic dedica- tion. Living in a pink bordello, where he flounced about in gauzy confections Danny La Rue might have coveted, he was im- agining that dolorous temple in the moun- tains at Montsalvat. Again art and life are in systematic, schizophrenic contradiction.

In the first letters, Wagner is a chirpily ambitious provincial, hoping (as he puts it to Appel in 1834) to `acquire both fame and fortune'. By 1852 the aim is more overweening, expressed in a megalomaniac tantrum. `The whole wide world is full of shits!' he rages to the critic Uhlig. `Ah, my dear friend!' he continues, with something like the slithery chromatic shifts of his music, 'at least write as much as you can about me and fill the music journals, so that I at least shall become very famous'. And this is only the beginning: by the end of the volume, the man who once wanted to be famous, then very famous, is ready to become immortal, supplanting whatever enfeebled gods remained in the late 19th century. Farewelling the singers at Bayreuth in 1875, he recalls that the Greeks when celebrating art could apotheosise Apollo, but `we no longer had any gods'. This was false modesty. At Christmas in 1880, his children grouped themselves into a tableau representing the Holy Family, with young Siegfried — straddling Nordic and Christian religious cults — as Jesus; and Wagner, having elected himself to divinity, began to dis- pense cosmic anathemas, declaring 'the Jewish race the born enemy of pure humanity and all that is noble in man'. Even in his grovelling letters to Ludwig II, he plots an absolute monarchy of his own, and describes his agent Neumann — de- puted to arrange performances of the Ring in London — as 'my "Foreign Minister" '.

The letters amount to a compendious demonology, like a mediaeval march-past of the deadly sins: all human nastiness is here. While reading them, I put my old addiction to the test by listening to some of the music again. To my amazement, it remains uninfected. Isolde's erotic rhaps- ody. Wotan's remorse, Elsa's worldly wisdom — the operas abound in a gener- ous human understanding entirely absent from Wagner's own character and his personal dealings. I don't hear malarial evil in the music, as Nietzsche in his disen- chantment did. Are moral crimes justifi- able when they produce great art? I end on the question, because I'm afraid of its answer.