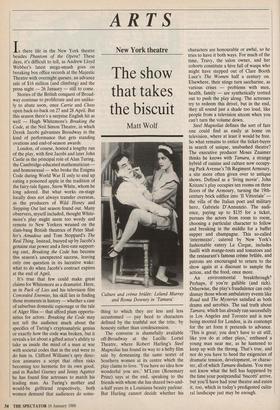 The show that takes the biscuit

Is there life in the New York theatre besides Phantom of the Opera? These days, it's difficult to tell, as Andrew Lloyd Webber's latest mega-smash goes on breaking box office records at the Majestic Theatre with overnight queues, an advance sale of $16 million (and climbing) and the press night — 26 January — still to come.

Stories of the British conquest of Broad- way continue to proliferate and are unlike- ly to abate soon, once Carrie and Chess open back-to-back on 27 and 28 April. But this season there's a surprise English hit as well — Hugh Whitemore's Breaking the Code, at the Neil Simon Theatre, in which Derek Jacobi galvanises Broadway in the kind of performance that gets standing ovations and end-of-season awards.

London, of course, hosted a lengthy run of the play, with first Jacobi and later John Castle in the principal role of Alan Turing, the Cambridge-educated mathematician— and homosexual — who broke the Enigma Code during World War II only to end up eating a poisoned apple in the tradition of the fairy-tale figure, Snow White, whom he long adored. But what works on-stage locally does not always transfer overseas, as the producers of Wild Honey and Stepping Out last season found out. Many observers, myself included, thought White- more's play might seem too wordy and remote to New Yorkers weaned on the slam-bang British theatrics of Peter Shaf- fer's Amadeus and Tom Stoppard's The Real Thing. Instead, buoyed up by Jacobi's genuine star power and a first-rate support- ing cast, Breaking the Code has become this season's unexpected success, leaving only one question in its lucrative wake: what to do when Jacobi's contract expires at the end of April.

It's true that few could make great claims for Whitemore as a dramatist. Here, as in Pack of Lies and his television film Concealed Enemies, his skill lies in finding those moments in history — whether a case of suburban domestic espionage or the tale of Alger Hiss — that afford plum opportu- nities for actors. Breaking the Code may not tell the audience much about the specifics of Turing's cryptoanalytic genius or exactly how the code was broken, but it reveals a lot about a gifted actor's ability to take us inside the mind of a man at war with societal codes that in the end were to do him in. Clifford Williams's spry direc- tion animates a script that often risks becoming too hermetic for its own good, and in Rachel Gurney and Jenny Agutter he has found fine actresses to match his leading man. As Turing's mother and would-be girlfriend respectively, both women demand that audiences do some- Culture and creme bralie: Leland Murray and Roma Downey in 'Tamara' thing to which they are less and less accustomed — pay heed to characters defined by the truthful not the trite, by honesty rather than condescension.

The converse is shamefully available off-Broadway at the Lucille Lortel Theatre, where Robert Harling's Steel Magnolias has found its way to a hefty film sale by demeaning the same sextet of Southern women at its centre which the play claims to love. 'You have no idea how wonderful you are,' M'Lynn (Rosemary Prinz) says at the end, speaking to the friends with whom she has shared two-and- a-half years in a Louisiana beauty parlour. But Hailing cannot decide whether his characters are honourable or awful, so he tries to have it both ways. For much of the time, Truvy, the salon owner, and her cohorts constitute a hive full of wasps who might have stepped out of Clare Booth Luce's The Women half a century on. Elsewhere, their stings turn saccharine, as various crises — problems with men, health, family — are synthetically trotted out to push the play along. The actresses try to redeem this drivel, but in the end, they all sound just a shade too loud, like people from a television sitcom when you can't turn the volume down.

Steel Magnolias defines the sort of fare one could find as easily at home on television, where at least it would be free. So what remains to entice the ticket-buyer in search of unique, unabashed theatre? The executive producer Moses Znaimer thinks he knows with Tamara, a strange hybrid of cuisine and culture now occupy- ing Park Avenue's 7th Regiment Armoury, a site more often given over to antique shows. Defined as a 'living movie', John Krizanc's play occupies ten rooms on three floors of the Armoury, turning the 19th- century brick edifice into 'II Vittoriale' — the villa of the Italian poet and military hero, Gabriele D'Annunzio. The audi- ence, paying up to $135 for a ticket, pursues the actors from room to room, choosing a particular character to follow and breaking in the middle for a buffet supper and champagne. This so-called 'intermezzo', catered by New York's fashionable eatery Le Cirque, includes fusilli with mange-touts and tomatoes and the restaurant's famous crème brCtlee, and patrons are encouraged to return to the show again at a discount to sample the action, and the food, once more.

An environmental breakthrough? Perhaps, if you're gullible (and rich). Otherwise, the play's fraudulence can only dismay those whom ambulatory events like Road and The Mysteries satisfied as both drama and aerobics. The sad truth about Tamara, which has already run successfully in Los Angeles and Toronto and is now being mooted for London, is its contempt for the art form it pretends to advance. 'This is great; you don't have to sit still, like you do at other plays,' enthused a young man near me, as he hastened to keep up with the throng. That's true, and nor do you have to heed the exigencies of dramatic tension, development, or charac- ter, all of which Tamara disdains. You may not know what the hell has happened by the time your postprandial tiscotti' arrive, but you'll have had your theatre and eaten it, too, which in today's predigested cultu- ral landscape just may be enough.