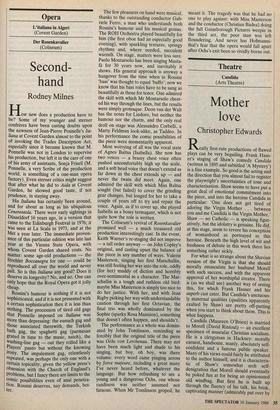 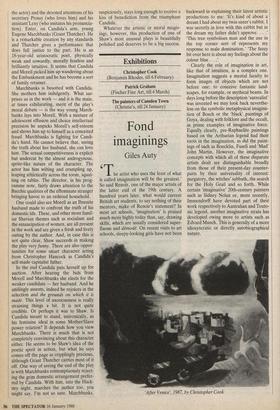 Really first-rate productions of flawed plays can be very beguiling. Frank Haus- er's staging of Shaw's comedy Candida (written in 1895 and subtitled 'A Mystery') is a fine example. So good is the acting and the direction that you almost fail to register the playwright's uncertainties of tone and characterisation. Shaw seems to have put a great deal of emotional commitment into the piece, and into the heroine Candida in particular: 'One does not get tired of adoring the Virgin Mother . . . between you and me Candida is the Virgin Mother.' Shaw — no Catholic — is speaking figur- atively, but the idolatry is genuine. He did, at this stage, seem to revere his conception of womanhood as portrayed in this heroine. Beneath the high level of wit and freshness of debate in this work there lies something rather sickly.

For what is so strange about the Shavian version of the Virgin is that she should morally emasculate her husband More11 with such success, and with the apparent approval of her worshipful creator. There is (as we shall see) another way of seeing this, for which Frank Hauser and his superb cast cater. But Candida's unctuous- ly maternal qualities (qualities apparently exalted by Shaw) are pretty off-putting when you start to think about them. This is what happens.

Candida (Maureen O'Brien) is married to More11 (David Rintoul) — an excellent specimen of muscular Christian socialism. He is a clergyman in Hackney: morally earnest, handsome, manly, absolutely self- confident and a famous public speaker. Many of his views could fairly be attributed to the author himself, and it is characteris- tic of Shaw's somewhat arch self- denigration that More11 should eventually be poked fun at for being an opinionated old windbag. But first he is built up through the fluency of his talk, his brisk, captivating manner (admirably put over by the actor) and the devoted attentions of his secretary Prossy (who loves him) and his assistantiexy (who imitates his pronuncia- tion). Enter, on Candida's arm, young Eugene Marchbanks (Grant Thatcher). He is a remarkable creation by any standards and Thatcher gives a performance that does full justice to the part. He is an 18-year-old aristocratic poet, physically weak and cowardly, morally fearless and brilliantly intuitive. It seems that Candida and More11 picked him up wandering about the Embankment and he has become a sort of family retainer. Marchbanks is besotted with Candida. She mothers him indulgently. What sur- prises us in the work -- and it is the main, at times exhilarating, merit of the play's moral debate — is the way young March- banks lays into Morel]. With a mixture of adolescent effusion and choice intellectual precision he unpicks More11's self-esteem and shows him up to himself as a conceited fraud. Marchbanks is fighting for Candi- da's hand. He cannot believe that, seeing the truth about her husband, she can love him. The sexual competitiveness is explicit but undercut by the almost androgynous, sprite-like nature of the character. The actor has him wilting and crumpling up, leaping athletically across the room, squat- ting on tables. The director, in his prog- ramme note, fairly draws attention to the i3acchic qualities of the effeminate stranger bringing havoc to an ordered household.

One could also see More11 as an Ibsenite husband made to confront the truth of his domestic life. These, and other more famil- iar Shavian themes such as socialism and the emancipation of women, are all present in the work and are given a fresh and lively outing by the author. And, in case this is not quite clear, Shaw succeeds in making the play very funny. There are also oppor- tunities for some smart character acting from Christopher Hancock as Candida's self-made capitalist father.

In the end Candida puts herself up for auction. After hearing the bids from Morell and Marchbanks she elects for the weaker candidate — her husband. And he smilingly assents, indeed he rejoices in the selection and the grounds on which it is. made. This level of uxoriousness is really straining things a bit. It is not quite credible. Or perhaps it was to Shaw. Is Candida meant to stand, unironically, as his feminine ideal in some Mother/Slave power relation? It depends how you view Marchbanks. There is much that is not completely convincing about this character either. He seems to be Shaw's idea of the poetic spirit in action, but what he says comes off the page as cripplingly precious, although Grant Thatcher carries most of it off. One way of seeing the end of the play is with Marchbanks contemptuously reject- ing the grim domestic arrangement prefer- red by Candida. With him, into the Hack- ney night, marches the author too, you might say. I'm not so sure. Marchbanks, suspiciously, stays long enough to receive a kiss of benediction from the triumphant Candida.

Whatever the artistic or moral misgiv- ings, however, this production of one of Shaw's most unusual plays is beautifully polished and deserves to be a big success.