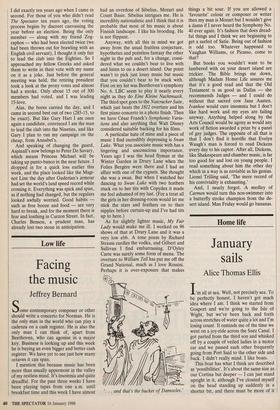 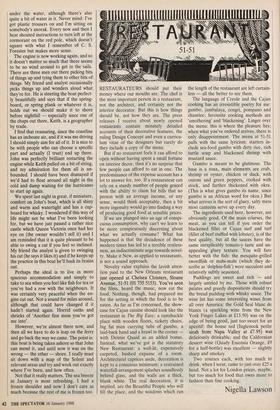 I'm all at sea. Well, not precisely sea. To be perfectly honest, I haven't got much idea where I am. I think we started from Gosport and we're going to the Isle of Wight, but we've been back and forth across stretches of water quite a lot and I'm losing count. It reminds me of the time we went on a joy-ride across the Suez Canal. I got parted from the third son and whisked off by a couple of veiled ladies in a motor car and we passed each other frequently going from Port Said to the other side and back. I didn't really mind. I like boats.

This boat has what I think are described as 'possibilities'. It's about the same size as our Cortina but deeper — I can just stand upright in it, although I've clouted myself on the head standing up suddenly in a shorter bit, and there must be more of it under the water, although there's also quite a bit of water in it. Never mind: I've got plastic trousers on and I'm sitting on somebody's anorak. Every now and then I hear shouted instructions to turn left at the cormorant on the red pole, which doesn't square with what I remember of C. S. Forester but makes more sense.

The ejigine is now working again, and so it doesn't matter so much that there seems to be no wind around to get in the sails. There are three men out there picking bits of things up and tying them to other bits of things. My friend and analyst occasionally picks things up and wonders aloud what ' they're for. He is steering the boat perfect- ly beautifully and says that if the spring- board, or spring plank or whatever it is, holds out we should make it to shore before nightfall — especially since one of the chaps out there, Keith, is a geographer by trade.

I find that reassuring, since the coastline has an inchoate air, and if it was me driving I should simply aim for all of it. It is nice to be with people who can choose a specific part and actually (I trust) end up there. John was perfectly brilliant restarting the engine while Keith pulled on a bit of string, and my admiration for them all is un- bounded. I should have been dismayed if we'd had to float around all night in the cold and damp waiting for the hurricanes to start up again.

We spent last night in great, if miniature, comfort on John's boat, which is all shiny and warm and watertight and has a cup- board for whisky. I wondered if this way of life might not be what I've been looking for, but we have just passed a rather nice castle which Queen Victoria once had her eye on (the owner wouldn't sell it) and I am reminded that it is quite pleasant to be able to swing a cat if you feel so inclined. My friend the analyst is given to swinging his cat (he says it likes it) and if he keeps up the practice in this boat he'll bash its brains out.

Perhaps the ideal is to live in more spacious accommodation and simply to take to sea when you feel like fish for tea or you've had a row with the neighbours. It was certainly very peaceful when the en- gine cut out. Not a sound for miles around, although that could have changed if it hadn't started again. Horrid oaths and shrieks of 'Another fine mess you've got me into'.

However, we're almost there now, and then all we have to do is leap on the ferry and go back the way we came. The point is: this boat is being taken ashore so that John can mend it, and until now it was on the wrong — the other — shore. I really must sit down with a map of the Solent and relevant areas and try and work out exactly where I've been, and how often.

Not that it really matters. The sea breeze in January is most refreshing. I had a frozen shoulder and now I don't care as much because the rest of me is frozen too.