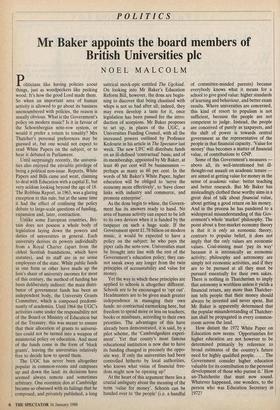 Mr Baker appoints the board members of British Universities plc

Politicians. like having policies aoout things, just as woodpeckers like pecking wood. It's how the good Lord made them. So when an important area of human activity is allowed to go about its business unencumbered with policies, the reason is usually obvious. What is the Government's policy on modern music? Is it in favour of the Schoenbergian note-row system, or would it prefer a return to tonality? Mrs 'Thatcher's personal preferences may be guessed at, but one would not expect to read White Papers on the subject, or to hear it debated in Parliament.

Until surprisingly recently, the universi- ties also enjoyed the enviable privilege of being a political non-issue. Reports, White Papers and Bills came and went, claiming to deal with Education with a capital E, but very seldom looking beyond the age of 18. The Robbins Report, in 1963, was a glaring exception to this rule; but at the same time it had the effect of confining the policy debate to large-scale questions of funding, expansion and, later, contraction.

Unlike some European countries, Bri- tain does not possess a whole body of legislation laying down the powers and duties of universities in general. Each university derives its powers individually from a Royal Charter (apart from the oldest Scottish foundations, which have statutes), and its staff are in no sense employees of the state. While public funds in one form or other have made up the lion's share of university incomes for most of this century, the method of funding has been deliberately indirect: the main distri- butor of government funds has been an independent body, the University Grants Committee, which is composed predomi- nantly of academics. Until 1964 the UGC's activities came under the responsibility not of the Board or Ministry of Education but of the Treasury; this was meant to ensure that their allocation of grants to universi- ties ,could not be turned into a weapon of ministerial policy on education. And most of the funds come in the form of 'block grants', leaving the universities relatively free to decide how to spend them.

The UGC has never been altogether popular in common-rooms and campuses up and down the land: its decisions have seemed always remote and sometimes arbitrary. One eccentric don at Cambridge became so obsessed with its failings that he composed, and privately published, a long satirical mock-epic entitled The Ugckiad. On looking into Mr Baker's Education Reform Bill, however, the dons are begin- ning to discover that being chastised with whips is not so bad after all; indeed, they may even develop a taste for it, once legislation has been passed for the intro- duction of scorpions. Mr Baker proposes to set up, in places of the UGC, a Universities Funding Council, with all the increased powers outlined by Professor Kedourie in his article in The Spectator last week. The new UFC will distribute funds on an ill-defined 'contractual' basis; and of its membership, appointed by Mr Baker, at least 40 per cent will be businessmen — perhaps as many as 60 per cent. In the words of Mr Baker's White Paper, higher education will be obliged to 'serve the economy more effectively', to 'have closer links with industry and commerce, and promote enterprise'.

As the dons begin to whine, the Govern- ment has its answers ready to hand. No area of human activity can expect to be left to its own devices when it is funded by the taxpayer on such a huge scale. If the Government spent £1.78 billion on modern music, it would be expected to have a policy on the subject: he who pays the piper calls the note-row. Universities must be brought into line with the rest of the Government's education policy; they can- not sneak away any longer from the twin principles of accountability and value for money.

Yet the way in which these principles are applied to schools is altogether different. Schools are to be encouraged to 'opt out'. Headmasters are to be given much greater independence in managing their own funds: no contractual earmarking here, but freedom to spend more or less on teachers, books or minibuses, according to their own priorities. The advantages of this have already been demonstrated, it is said, by a pilot scheme, the 'Cambridgeshire experi- ment'. Yet that county's most famous educational institution is now due to have its funding changed in precisely the oppo- site way. If only the universities had been controlled hitherto by local authorities, who knows what vistas of financial free- dom might now be opening up?

At the heart of this argument there lies a crucial ambiguity about the meaning of the term 'value for money'. Schools can be handed over to 'the people' (i.e. a handful of committee-minded parents) because everybody knows what it means for a school to give good value: higher standards of learning and behaviour, and better exam results. Where universities are concerned, this kind of resort to populism is not sufficient, because the people are not competent to judge. Instead, the people are conceived of purely as taxpayers, and the shift of power is towards central government as the representative of the people in that financial capacity. 'Value for money' thus becomes a matter of financial value, of contributions to GNP.

Some of this Government's measures — above all, its well-intentioned but ill- thought-out assault on academic tenure -- are aimed at getting value for money in the sense of academic value: better teaching and better research. But Mr Baker has misleadingly clothed these worthy aims in a great deal of talk about financial value, about getting a good return on his money. And in the process he has pandered to a widespread misunderstanding of this Gov- ernment's whole 'market' philosophy. The point about a free-market economy theory is that it is only an economic theory; contrary to popular belief, it does not imply that the only values are economic values. Coal-mining must 'pay its way' because it is intrinsically an economic activity; philosophy and astronomy are simply not economic activities, and if they are to be pursued at all they must be pursued essentially for their own sakes. There is nothing in 'Thatcherism to imply that astonomy is worthless unless it yields a financial return, any more than Thatcher- ism tells people that their money should always be invested and never spent. But Mr Baker is apparently determined that the popular misunderstanding of Thatcher- ism shall be propagated in every common- room across the land.

How distant the 1972 White Paper on Education now seems: 'Opportunities for higher education are not however to be determined primarily by reference to broad estimates of the country's future need for highly qualified people. . . . The Government consider higher education valuable for its contribution to the personal development of those who pursue it.' How un-Thatcherite that must now sound. Whatever happened, one wonders, to the person who was Education Secretary in 1972?