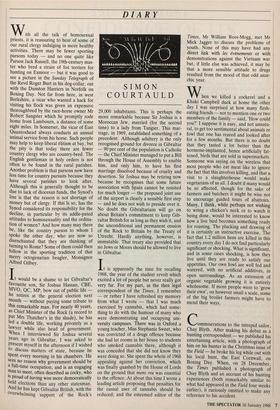 With all the talk of homosexual priests, it is reassuring to hear of some of our rural clergy indulging in more healthy activities. There may be fewer sporting parsons today — and no one quite like Parson Jack Russell, the 19th-century mas- ter who bred a strain of fox terriers for hunting on Exmoor — but it was good to see a picture in the Sunday Telegraph of the Revd Roger Burt in his dog-collar, out with the Dunston Harriers in Norfolk on Boxing Day. Not far from here, in west Berkshire, a vicar who wanted a hack for visiting his flock was given an expensive thoroughbred by the race-horse owner Mr Robert Sangster which he promptly rode home from Lambourn, a distance of some eight miles. In Somerset, the vicar of East Quantoxhead always conducts an annual animal service from his horse. Such people may help to keep liberal elitism at bay, but the pity is that today there are fewer country clergy who are country-bred. The English gentleman in holy orders is not often to be found in the rural parishes. Another problem is that parsons now have less time for country pursuits because they have several parishes to look after. Although this is generally thought to be due to lack of diocesan funds, the Synod's line is that the reason is not shortage of money but of clergy. If this is so, has the Synod considered its responsibility for the decline, in particular by its addle-pated attitudes to homosexuality and the ordina- tion of women? And how many may there be, like the country parson to whom I spoke the other day, who are now so disenchanted that they are thinking of turning to Rome? Some of them could then follow in the sporting tradition of that merry octogenarian beagler, Monsignor Alfred Gilbey.

It would be a shame to let Gibraltar's favourite son, Sir Joshua Hassan, CBE, MVO, QC, MP, bow out of public life — he retires at the general election next month — without paying some tribute to this remarkable man. For nearly 40 years, as Chief Minister of the Rock (a record to put Mrs Thatcher's in the shade), he has led a double life, working privately as a lawyer while also head of government. When I interviewed Sir Joshua several Years ago in Gibraltar, I was asked to Present myself in the afternoon if I wished to discuss matters of state, because he spent every morning in his chambers. He sees no reason why government should be a full-time occupation, and is an engaging m. an to meet, often described as cocky, who is proud of having won more democratically held elections than any other statesman. And he has kept Gibraltar British, with the overwhehning support of the Rock's 29,000 inhabitants. This is perhaps the more remarkable because Sir Joshua is a Moroccan Jew, married (for the second time) to a lady from Tangier. This mar- riage, in 1969, established something of a precedent. Although adultery is the only recognised ground for divorce in Gibraltar —90 per cent of the population is Catholic — the Chief Minister managed to put a Bill through the House of Assembly to enable him, and only him, to have his first marriage dissolved because of cruelty and desertion. Sir Joshua may be retiring now because he recognises that some future association with Spain cannot be resisted for much longer — the proposed joint use of the airport is clearly a sensible first step — and he does not wish to preside over it. No doubt the Gibraltarians will go on about Britain's commitment to keep Gib- raltar British for as long as they wish it, and the unconditional and permanent cession of the Rock to Britain by the Treaty of Utrecht. Hardly anything, however, is immutable. That treaty also provided that no Jews or Moors should be allowed to live in Gibraltar.

It is apparently the time for recalling 1968, the year of the student revolt which excited a lot of people but never really got very far. For my part, as the then legal correspondent of the Times, I remember — or rather I have refreshed my memory from what I wrote — that I was much exercised by cannabis, which had some- thing to do with the humour of many who were demonstrating and occupying uni- versity campuses. There was in Oxford a young teacher, Miss Stephanie Sweet, who was convicted of a drugs offence because she had let rooms in her house to students who smoked cannabis there, although it was conceded that she did not know they were doing so. She spent the whole of 1968 appealing against her conviction, which was finally quashed by the House of Lords on the ground that mens rea was essential to the offence. At about this time I wrote a leading article proposing that penalties for the casual user of cannabis should be reduced; and the esteemed editor of the Times, Mr William Rees-Mogg, met Mr Mick Jagger to discuss the problems of youth. None of this may have had any direct link with les evenements or with demonstrations against the Vietnam war but, if little else was achieved, it may be that a more sensible attitude to drugs resulted from the mood of that odd anar- chic year.

When we killed a cockerel and a Khaki Campbell duck at home the other day I was surprised at how many flesh- eating friends — not to mention one or two members of the family — said, 'How could you?' I suppose it is easy, and not unnatu- ral, to get too sentimental about animals or fowl that one has reared and looked after for a few months. But there is no doubt that they tasted a lot better than the hormone-implanted, hence artificially fat- tened, birds that are sold in supermarkets. Someone was saying on the wireless that most people who eat meat like to ignore the fact that this involves killing, and that a visit to a slaughterhouse would make vegetarians of us all. I doubt if many would be so affected, though for the sake of farmers and butchers it might be wise not to encourage guided tours of abattoirs. Many, I think, while perhaps not wishing to wring a chicken's neck or to watch it being done, would be interested to know how a live bird becomes something ready for roasting. The plucking and drawing of it is certainly an instructive exercise. The fact that 1.2 million hens are killed in this country every day I do not find particularly significant or shocking. What is significant, and in some cases shocking, is how they live until they are ready to satisfy our appetities. Our own fowl are well fed and watered, with no artificial additives, in open surroundings: As an extension of organic vegetable growing it is entirely wholesome. If more people were to 'grow their own', on however small a scale, some of the big broiler farmers might have to mend their ways.

Commiserations to the intrepid sailor, Chay Blyth. After making his debut as a hunting correspondent — we published his entertaining article, with a photograph of him on his hunter in the Christmas issue of the Field— he broke his leg while out with his local hunt, the East Cornwall, on Boxing Day. When, on 28 December, the Times published a photograph of Chay Blyth and an account of his hunting experiences (both remarkably similar to what had appeared in the Field four weeks earlier), it curiously omitted to make any reference to his accident.