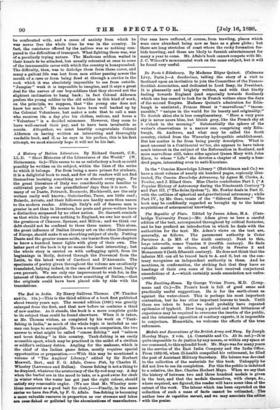 The Rod in India. By Henry Sullivan Thomas. (W. Thacker

and Co. 15s.)—This is the third edition of a book first published about twenty years ago. The second edition (1881) was greatly enlarged from the first, and that now before us contains a third of new matter. As it stands, the book is a more complete guide to its subject than could be found elsewhere. When it is taken, as Mr. Thomas wishes, as completed by his work on " Tank- fishing in India," as much of the whole topic is included as one man can hope to accomplish. To use a rough comparison, the two answer to what might be called "coarse fishing" and "salmon and trout fishing " in this country. Tank-fishing is an easily accessible sport, which may be practised in the midst of a civilian or soldier's ordinary duties. Angling for the mahseer, which is the chief of the Indian game fishes, mostly requires special opportunities or preparation.—With this may be mentioned a volume of " The Anglers' Library," edited by Sir Herbert Maxwell, Bart, and F. G. Afialo, Coarse Fish, by Charles H. Wheeley (Lawrence and Bullen). Coarse fishing is not a thing to be despised, whatever the aristocracy of the fly-rod may say. A day when the barbel are in the mood to take, or a good swim for chub in winter when the water has got just the right colour, should satisfy any reasonable angler. (We see that Mr. Wheeley men- tions macaroni as a good bait for chub.)—Finally, in the same series we have Sea-Fish, by F. G. Afialo. Sea-fishing is becoming a more valuable resource in proportion as our streams and lakes are over-fished or polluted by the abominations of manufacture. Our seas have suffered, of course, from trawling, places which were once abundant being now as bare as a glass globe ; but there are long stretches of coast where the rocky formation for- bids trawling, and these are likely to furnish entertainment for many a year to come. Mr. Alleles book cannot compete with Mr. J. C. Wilcock's monumental work on the same subject, but it will be found very useful.