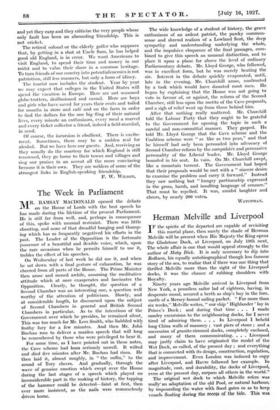 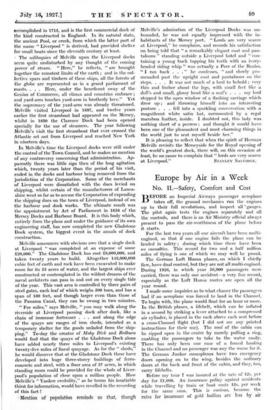 IF the spirits of the departed are capable of revisiting this mortal plane, then surely the shade of Herman Melville will be present when His Majesty the King opens the Gladstone Dock, at Liverpool, on July 19th next. The whole affair is one that would appeal strongly to the author of Moby Dick. It is only necessary to dip into Redburn, his equally autobiographical though less famous story of the sea, to realize that if there was one thing that thrilled . Melville more than the sight of the Liverpool docks, it was the chance of rubbing shoulders with Royalty. Ninety years ago Melville arrived in Liverpool from New York, a penniless sailor lad of eighteen, having, in desperate mood, secured a berth as ship's boy in the fore- castle of a Mersey-bound sailing packet. " For more than six weeks," Melville writes, " our ship ' Highlander ' lay in Prince's Dock ; and during that time . . . I made sundry excursions to the neighbouring docks, for I never tired of admiring them. . . In Liverpool I beheld long China walls of masonry ; vast piers of stone ; and a succession of granite-rimmed docks,• completely enclosed, and many of them communicating. . . . Liverpool may justly claim to have originated the model of the Wet Dock, so called, of the present day ; and everything. that is connected with its design, construction, regulation, and improvement. Even London was induced to copy after Liverpool, and Havre followed her example. In magnitude, cost, and durability, the docks of Liverpool, even at the present day, surpass all others in the world." The original wet dock to which Melville refers was really' an adaptation of the old Pool, or natural harbour, by impounding the water with flood gates so as to keep vessels floating during_ the _recess of the tide. This Was riccomplished in 1715, and is the first commercial dock of the kind constructed in England. In its natural state, the ancient Pool, or creek, from which the latter part of the name " Liverpool " is derived, had provided shelter for small boats since the eleventh century at least.

The soliloquies of Melville upon the Liverpool docks seem quite undisturbed by any thought of the coming power of steam. " Here," he reflects, " are brought together the remotest limits of the earth ; and in the col- lective spars and timbers of these ships, all the forests of the globe are represented as in a grand parliament of masts.. . Here, under the beneficent sway of the Genius of Commerce, all climes and countries embrace ; and yard-arm touches yard-arm in brotherly love." Yet the supremacy of the yard-arm was already threatened. Melville visited Liverpool in 1837, and twelve years earlier the first steamboat had appeared on the Mersey, whilst in 1830 the Clarence Dock had been opened specially for the use of steamers. The year following Melville's visit the first steamboat that ever crossed the Atlantic set out from Liverpool and reached New York in nineteen days.

In Melville's time the Liverpool docks were still under the control of the Town Council, and he makes no mention of any controversy concerning that administration. Ap- parently there was little sign then of the long agitation which, twenty years later than the period of his visit, ended in the docks and harbour being removed from the jurisdiction of the Corporation. Some of the merchants of Liverpool were dissatisfied with the dues levied on shipping, whilst certain of the manufacturers of Lanca- shire went so far as to accuse the Corporation of expending the shipping dues on the town of Liverpool, instead of on the harbour and dock works. The ultimate result was the appointment by Act of Parliament in 1858 of the Mersey Docks and Harbour Board. It is this body which, entirely from the plans and under the guidance of its own engineering staff, has now completed the new Gladstone Dock system, the biggest event in the annals of dock construction.

Melville announces with obvious awe that a single dock at Liverpool " was completed at an expense of some £20,000." The Gladstone Dock has cost £8,000,000, and taken twenty years to build. Altogether 143,000,000 cubic feet of earth and rock have been excavated to make room for its 55 acres of water, and the largest ships ever constructed or contemplated in the wildest dreams of the naval architects can pass in and out on every single tide of the year. This vast area is controlled by three pairs of steel gates, each leaf of which weighs. 500 tons, and has a span of 130 feet, and though larger even than those of the Panama Canal, they can be swung in two minutes.

" For miles," says Melville, " you may walk along the riverside at - Liverpool passing dock after dock, like a chain of immense fortresses . . . and along the edge of the quays are ranges of iron sheds, intended as a temporary shelter for the goods unladed from the ship- ping." To-day the creator of Moby Dick and Redburn would find that the - quays of the Gladstone Dock alone have added nearly three miles to Liverpool's existing twenty-five miles of lineal quayage. As for the " sheds," he would discover that at the Gladstone Dock these have developed into huge three-storey buildings of ferro- concrete and steel, with a floor area of 57 acres, in which standing room could be provided for the whole of Liver- pool's population of close upon a million people. How " Yankee credulity," as he terms his insatiable thirst for information, would have revelled in the recording of this fact !

Mention of. population reminds us that, though

Melville's admiration of the Liverpool Docks was un- bounded, he was not equally impressed with the in- habitants of the Mersey port. " Lords. are very scarce at Liverpool," he complains, and records his satisfaction on being told that " a remarkably elegant coat and pan- taloons " standing outside a Liverpool hotel and " con- taining a young buck tapping his teeth with an ivory- headed riding whip " was actually a Peer of the Realm. " I ran back . . " he confesses, " and slowly pro- menaded past the upright coat and pantaloons on the steps. . . . It was not much of a lord to behold ; very thin and limber about the legs, with small feet like a doll's and small, glossy head like a seal's . . . my lord stepped to the open window of a flashing carriage which drew up ; and throwing himself into an interesting posture . . . fell into a sparkling conversation with a magnificent white satin hat, surmounted by a regal marabou feather, inside. I doubted not, this lady was nothing short of a peeress ; and thought it would have been one of the pleasantest and most charming things in the world just to seat myself beside her."

It is pleasing to reflect that when the spirit of Herman Melville revisits the Merseyside for the Royal opening of the world's greatest dock, there will, on this occasion at least, be no cause to complain that " lords are very scarce