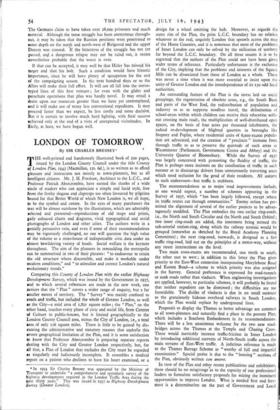 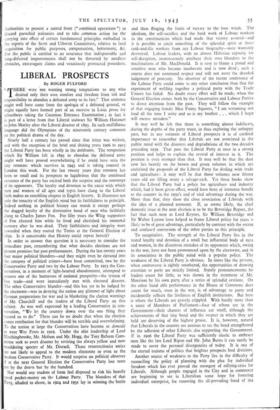 THE well-printed and handsomely illustrated book of 200 pages, I issued by the London County Council under the title County of London Plan, 1943 (Macmillan, 125. 6d.), is so written as to afford pleasure and instruction not merely to town-planners, but to all intelligent citizens. Mr. J. H. Forshaw, Architect to the L.C.C., and Professor Patrick Abercrombie, have earned the thanks of a wide circle of readers who can appreciate a simple and lucid style, free from the frothy slogans and claptraps too often favoured by pilgrims bound for that Better World of which New London is, we all hope, to be the symbol and centre. In the eyes of many purchasers the text will be almost outshone by the illustrations, which are admirably selected and presented—reproductions of old maps and prints, gaily coloured charts and diagrams, vivid typographical and aerial photographs of London and other cities. The authors write in a genially persuasive vein, and even if some of their recommendations may be vigorously challenged, no one will question the high value of the volume as a store-house of indispensable civic data under an almost bewildering variety of heads. Social welfare is the keynote throughout. The aim of the planners in remoulding the metropolis can be summarised in two of their phrases: " to endeavour to retain the old structure where discernible, and make it workable under modern conditions," and " to stimulate and correct London's natural evolutionary trends."

Comparing this County of London Plan with the earlier Highway Development Survey, which was issued by the Government in 1937, and to which several references are made in the new work, one notices that the " Plan " covers a wider range of enquiry, but a far smaller extent of territory. The " Survey " was mainly confined to roads and traffic, but included the whole of Greater London, as well as the City—a total area of 1,821 square miles ; the " Plan," on the other hand, touches every phase of civic and social life, from Centres of Culture to public-houses, but is limited geographically to the London County Council area, minus the City of London, i.e., a total area of only 116 square miles. There is little to be gained by dis- cussing the administrative and statutory reasons that underlie this severe geographical limitation of the Plan, and it is some satisfaction to know that Professor Abercrombie is preparing separate reports dealing with the City and Greater London respectively, but, for all that, a Plan of London that excludes the City must be regarded as singularly and ludicrously incomplete. It resembles a medical report on a patient who declines to have his heart examined, or a

* In 1934 Sir Charles Bressey was appointed by the Minister of Transport to undertake " a comprehensive and systematic survey of the highway developments required in the London Traffic Area during the next thirty years." This was issued in 1937 as Highway Development Survey (Greater London). design for a wheel omitting the hub. Moreover, as regards the outer rim of the Plan, the prim L.C.C. boundary has no relation whatever to the real, ungainly London that sprawls across the map of the Home Counties, and it is notorious that most of the problems of Inner London can only be solved by the utilisation of territory far beyond the L.C.C. boundary. On all these counts it is to be regretted that the authors of the Plan could not have been given wider terms of reference. Particularly unfortunate is the exclusion of the City, implying that the problems and interests of the Square Mile can be dissociated from those of London as a whole. There was never a time when it was more essential to insist upon the unity of Greater London and the interdependence of its 15o odd local authorities.

An outstanding feature of the Plan is the stress laid on social groupings, the regeneration of obsolete areas, e.g., the South Bank and parts of the• West End, the redistribution of population and industry so as to suppress needless travel, the delimitation of school-areas within which children can receive their education with- out crossing main roads, the multiplication of well-distributed open spaces, on the basis of four acres per thousand inhabitants, the radical re-development of blighted quarters in boroughs like Stepney and Poplar, where residential units of 6,000-to,000 popula- tion are advocated, and the creation of " precincts " immune from through traffic so as to preserve the quietude of such areas as Westminster (Parliament, Government Centre and Abbey) and the University Quarter of Bloomsbury. While the Survey of 1937 was largely concerned with promoting the fluidity of traffic, the Plan is perhaps more insistent on the canalisation of traffic in such manner as to discourage drivers from unnecessarily traversing areas which need seclusion for the good of their residents. All success to such endeavours—but traffic is stubborn.

The recommendations as to major' road improvements include, as one would expect, a number of schemes appearing in the Survey of 1937, which " has been largely followed, except ,where its traffic routes cut through communities." Enemy action has per- mitted the alignment of several of the earlier projects to be advan- tageously modified. The Plan embodies the two earlier ring-roads, i.e., the North and South Circular and the North and South Orbital ; two inner ring-roads are added, the innermost being termed the sub-arterial station-ring, along which the railway termini would be grouped (somewhat as sketched by the Royal Academy Planning Committee) ; the next ring-road, outwards, is designed as a fast traffic ring-road, laid out on the principles of a motor-way, without any street intersections on the level.

Two main cross-routes are recommended, one north to south, the other east to west ; in addition to this latter the Plan gives priority to the East-West connexion incorporating Marylebone Road and Euston Road—a scheme to which priority was also assigned in the Survey. General preference is expressed for road-tunnels or sunk roads rather than viaducts. When engineering investigations are applied, however, to particular schemes, it will probably be found that neither expedient can be dismissed ; the difficulties are too formidable. The dislike of viaducts is due in no small measure to the gratuitously hideous overhead railways in South London, which the Plan would replace by underground lines.

Proposals to display the Thames to better advantage are common to all town-planners and naturally find a place in the present Plan, which includes a' Southern Embankment in its recommendations.

There will be a less unanimous welcome for the two new road- bridges across the Thames at the Temple and Charing Cross. These would inevitably increase traffic-friction in Inner London

by introducing additional currents of North-South traffic across the main streams of East-West traffic. A judicious reference is made

to the Thames Barrage Scheme as "worthy of full and impartial examination." Special praise is due to the " housing " sections of the Plan, obviously written con amore.

In view of the Plan and other recent publications and exhibitions, there should be no misgivings as to the capacity of our professional leaders to formulate satisfactory proposals for seizing the imminent opportunities to improve London. What is needed first and fore- most is a determination on the part of Government and Local

Authorities to present a united front (" combined operations ") to discard parochial jealousies and to take common ,action for the carrying into effect of certain fundamental principles embodied in the reports of the Scott and Uthwatt Committees, relative to land acquisition for public purposes, compensation, betterment, &c. For the public is entitled to an assurance that indispensable and long-deferred improvements shall not be thwarted by needless obstacles, extravagant claims and vexatiously protracted procedure.