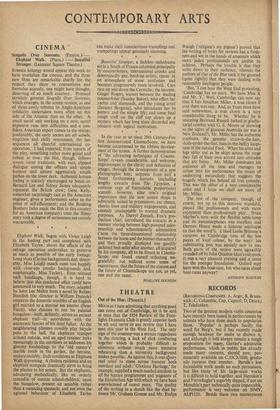 Out of the Blue. (Phoenix.)

MUCH as I hate admitting that anything good can come out of Cambridge, let it be said at once that the 1954 Review of the Foot- lights Dramatic Club is greatly superior both in wit and verve to any review that I have seen this year in the West End. The only sign of the amateur-was a certain raggedness in the dancing, a lack of slick combining together which is probably difficult to eliminate without much more intensive rehearsing than a university background makes possible. As against this, it was Avery real relief to come across humour both mordant and adult: 'Glorious Heritage,' for example, supplied a much-needed antidote to all the feature programmes and pageants of the Elizabethan Age with which we have been overwhelmed of recent years. The quality of the writing in a sketch like the duet be- tween Mr. Graham Greene and Mr. Evelyn Waugh ('religion's my pigeon') proved that the writing of lyrics for reviews has a fresh- ness and wit in the hands of amateurs which more jaded professionals are unable to achieve. Perhaps the trouble is that they write down to their audience, whereas the authors of Out of the Blue took it for granted (quite rightly) that they were dealing with reasonably intelligent people.

'But,' I can hear the West End protesting, 'Cambridge has no stars. We have Miss X and Mr. Y.' Well, Cambridge can now say that it has Jonathan Miller, a true clown if ever there was one. And, as Yeats must have

said somewhere, a true clown is a very considerable thing to be. Whether he is imitating Bertrand Russell locked in gladia- torial combat with G. E. Moore or showing us the sights of glorious Australia (or was it New Zealand?), Mr. Miller has the authentic craziness, the genuine straw-in-the-hair, skids-under-the-feet, bats-in-the-belfry loopi- ness of the natural Fool. When his arms and legs splay out as he skips across the stage they fall of their own accord into attitudes that are funny. Mr. Miller dominates his audience all the time and manages to infuse into his performance the strain of underlying melancholy that suggests the tragedy which lies behind all true comedy. This was the debut of a very considerable artist and I hope we shall see more of Mr. Miller.

The rest of the company, though, of course, not up to this demonic standard, played like professionals and with more enjoyment than professionals play. Brian Marber's turn with the flexible table-lamp and its metamorphoses was excellent and Dermot Hoare made a hideous odalisque (is that the word?). I liked Leslie Bricusse's excursus on Cambridge (one of the few pieces of local colour, by the way): his culminating pun was entirely new to me. Both parts of the review were agreeably

rounded off by John Quashie-Idun's calypsos. It was a very pleasant evening and a score for the younger foundation. Oxford may have won the boat-race, but who cares about boat-races anyway?