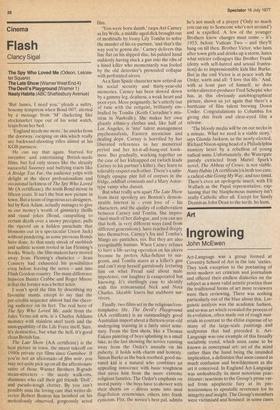 The Spy Who Loved Me (Odeon, Leicester Square) The Late Show (Warner West End 4) The Devil's Playground (Warner 1) Nasty Habits (ABC Shaftesbury Avenue) `But James, I need you,' pleads a sultry, bosomy temptress when Bond 007, alerted by a message from 'M' clacketing like stockmarket tape out of his wrist watch, leaps from her bed.

'England needs me more,' he smirks from the doorway. escaping on skis which really are backward-shOoting rifles aimed at his KGB pursuers.

He can say that again. Starved for inventive and entertaining British-made films, but fed only stones like the sleazily successful Sweeney and bullying tracts like A Bridge Too Far, the audience yelps with delight at the sheer professionalism and occasional larkiness of The Spy Who Loved Me (A certificate). the tenth Bond movie in fifteen years. It isn't the best new picture in town. But a team of ingenious set-designers, led by 'Ken Adam. actually manages to give us our money's worth of gimmicky thrills and visual jokes (Bond, catapulting to certain death over a snowy precipice, pulls the ripcord on a hidden parachute that blossoms out in a spectacular Union Jack) without pandering, as some previous Bonds have done, to that nasty streak of snobbish and sadistic sexism rooted in Ian Fleming's books. Wisely, the film-makers have moved away from Fleming's character —1Sean C'onnery had exhausted his possibilities MITI before leaving the series — and into Flash Gordon country. The main difference between Buster Crabbe and Roger Moore is that the former was a better actor.

I won't spoil the film by describing my favourite stunts, except to say that the pre-credits sequence almost had the cheering audience on its feet. The real hero of The Spy Who Loved Me, aside from the Jules Verne-ish sets. is 'a Charles Addams monster with stainless steel teeth and the unstoppability of the Life Force itself. Sure, it's destructive, but what the hell, it's good clean British fun.

The Late Show (AA certificate) is the best picture in town, the nicest takeoff on 1940s private eye films since Gumshoe. If you're not an aficionado of film noir, you may not quite pick up on all the affectionate satire of those Warner Brothers B-grade mean-streeters — the seedy walk-ons, shamuses who call their girl friends 'Doll', and pseudo-tough chatter. By you can't possibly miss the loving care that writer-director Robert Benton has lavished on his meticulously observed, gorgeously acted

'You were born dumb,' rasps Art Carney as Ira Wells, a middle-aged dick brought out of mothballs by loony Lily Tomlin to solve the murder of his ex-partner, 'and that's the way you're gonna die.' Carney delivers this line flat on his slipped disc, his palsied hand suddenly having stuck a gun into the ribs of a hired killer who momentarily was fooled by the old detective's pretended collapse with perforated ulcers.

As a Sam Spade character now retired on his social security and thirty-year-old memories. Carney has been slowed down by a gammy leg, deafness, a weak heart and poor eyes. More poignantly, he's utterly out of tune with the zeitgeist, brilliantly embodied by Tomlin (Keith Carradine's mistress in Nashville). She makes her own ghastly ethnic-y clothes and, like half of Los Angeles, is `into' talent management psychoanalysis, Eastern mysticism and dealing dope. Carney is horrified by her liberated references to her menstrual period and her let-it-all-hang-out kookiness. But gradually, working together on the case of her kidnapped cat (which leads Carney to his partner's killer), they learn to tolerably respect each other. There's a satisfyingly opaque plot full of corpses in the fridge, oddball criminals and a Mary Astortype vamp who dunnit.

But what really sets apart The Late Show from mere spoofery are Benton's demonstrable interest in — even love of — his characters, and the quality of collaboration between Carney and Tomlin. She imprdvised much of her dialogue, and you can see that both, in very different ways (and from different generations), have reached deeply into themselves. Carney's Ira and Tomlin's Margo are pastiches, yes. But they are also recognisably human. When Carney refuses to have a life-saving operation on his ulcers because he prefers Alka-Seltzer to surgeons, and Tomlin stares at a killer's gun and can't stop herself garrulously lecturing him on what Freud said about male impotence, our laughter is exasperated but knowing. It's startlingly easy to identify with this reincarnated Nick and Nora Charles, likeable losers but stubborn survivors.

Finally, two films set in the religious/contemplative life. The Devil's Playground (AA certificate) is an outstandingly good Australian import about a thirteen-year-old undergoing training in a fairly strict seminary. From the first shots, like a Thomas Eakins painting of boys splashing in a small lake, to the last showing the novice running away from the Order's assaults on his puberty, it holds with charm and honesty. Simon Burke as the buck-toothed, good-natured kid is a natural who combines an appealing innocence 'with basic toughness that saves him from the more extreme religious fanatics. The Order's emphasis on moral purity the boys have to shower with their shorts on — drives some into mad flagellation ceremonies, others into frank cynicism. Fitz, the novice's best pal, admits

he's not much of a prayer ('Only so much you can say to Someone who's not around') and is expelled. A few of the younger Brothers know changes must come — it's 1953, before Vatican Two — and they'll hang on till then. Brother Victor, who lusts after town girls and drinks up a storm, hates what stricter colleagues like Brother Frank (dotty with self-hatred and sexual frustration) do to impressionable kids like Burke. But in the end Victor is at peace with the Order, warts and all: 'I love this life.' And, with at least part of himself, so does writer-director-producer Fred Schepisi who has, in this obviously autobiographical picture, shown us yet again that there's a • hurricane of film talent brewing Down Under. Congratulations to Columbia for giving this fresh and clear-eyed film a release.

'The bloody media will be on our necks in a minute. What we need is a viable story,' says Glenda .lackson, as the newly-elected, Richard Nixon-aping head of a Philadelphia nunnery beset by a rebellion of young radical nuns. Unfortunately, the Watergate parody extracted from Muriel Spark's novel, The Abbess of Crewe, is not viable. Nasty Habits (A certificate) is both too cute, a radical-chic Going My Way, and too timid. There's even an apologetic insert, with Eli Wallach as the Papal representative, explaining that the blasphemous nunnery isn't really Catholic after all. Except for Sandy Dennis as John Dean to the teeth, ho hum.