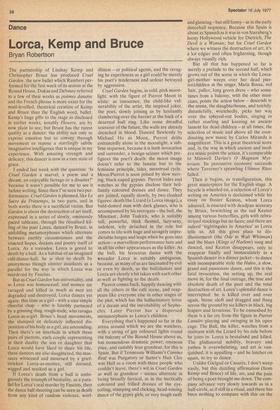 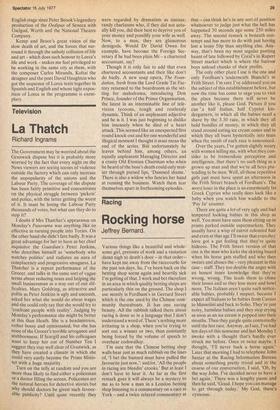 The partnership of Lindsay Kemp and Christopher Bruce has produced Cruel Garden, the new ballet which Rambert performed for the first week of its season at the Round House. Dukas and Debussy referred to a few of their works as poemes dansees and the French phrase is more exact for the muti-levelled, theatrical creation of Kemp and Bruce than the English word, ballet. Kemp's huge gifts to the stage as disclosed in earlier works, notably Flowers, are by now plain to see; but Bruce has the rarest quality as a dancer: the ability not only to express emotion but to convey through movement or repose a startlingly subtle imaginative intelligence that is unique in my experience. With amazing strength and delicacy, this dancer is now in a rare state of grace.

I ended last week with the question: 'Is Cruel Garden a marvel, a poem and a dream, an enjoyable farrago or a disaster?' because it wasn't possible for me to see it before writing. Since then I've seen two performances. Cruel Garden is planned, like Le Sacre du Printemps, in two parts, and in both works there is a sacrificial victim. But Garden is about the destruction of art itself, expressed in a series of slowly, ominously paced tableaux, through the ritualised killing of the poet Lorca, danced by Bruce, in unfolding metamorphoses which alternate between earthly circumstances and the enacted hopes, dreams and poetry itself of Lorca. As a toreador, Lorca is gored to death by a bull. As a habitué of an imagined café/dance-hall, he is shot to death by anonymous though sinister assailants as a parallel for the way in which Lorca was murdered by Fascists.

But as Cruel Garden has universality, and as Lorca was homosexual, and women are ravaged and killed as much as men are degraded and destroyed, Lorca dances yet again: this time as a girl —with a nice simple cheerful chap — who is forcibly partnered by a grinning thug, rough-trade, who ravages Lorca-as-a-girl. Bruce's head movements, the slumped or delicately inflected disposition of his body as a girl, are astounding. Then there's an interlude in which three pairs of pierrots, each couple representing in their duality the son or daughter that Lorca would have liked to share his life, these dancers are also slaughtered, the massacre witnessed and mourned by a griefstricken Lorca-as-mother, still dressed, wigged and masked as a girl.

If Lorca's death from a bull is ambiguously the triumph of bestiality, as a parallel for Lorca's real murder by Fascists, then the dance hall shooting can be seen as death from any kind of random violence, worl

dliness — or political agents, and the ravaging he experiences as a girl could be merely his poet's tenderness and ardour betrayed by aggression.

Cruel Garden begins, in cold, pink moonlight, with the figure of Pierrot Moon in white: as innocence, the child-like vulnerability of the artist, the inspired joker, the poet, slowly joining us by hesitantly clambering over the barrier at the back of a deserted bull ring. Like some dreadful. souvenir of the future, the walls are already drenched in blood. Danced flawlessly by Michael Ho as Moon, Pierrot drifts entrancedly alone in the moonlight, a sublime sequence, because it is both invocation and surrender, a benign seizure which prefigures-the poet's death: the moon image doesn't refer to the lunatic but to the feminine principle, tides, menstrual cycle. Moon /Pierrot is soon joined by slow moving, black-caped gypsies. Pierrot hides and watches as the gypsies disclose .their brilliantly coloured dresses and dance. They are joined, equally slowly, by two cloaked figures: death/the Lizard (a Lorca image), a bald-domed man with dark glasses, Who is accompanied by his surrogate — the bull, the Minotaur, John Tsakiris, who is suitably tall, powerful, thick fleshed, lazy-sexy, indolent, icily detached in the role but comes to life with huge and savagely unpredictable lunges and leaps when he goes into action — a marvellous performance here and in all his other appearances as the killer. As the bull, his ferocious dance with the toreador Lorca is suitably ambiguous, because, as many of us are fascinated by evil or even by death, so the bull/dancer and Lorca are clearly a bit taken with each other as well as fighting to the death.

Pierrot comes back, happily dancing with all the others in the café scene, and reappears like everyone else in other stages of the plot, which has the hallucinatory force of a dream and the inevitability of Sophocles. Later Pierrot has a dispersed metamorphosis as Lorca's children.

Everything that's happened so far in the arena around which we are the watchers, with a string of gay coloured lights round the balcony olthe Round House above us, has tremendous dramatic power, ominous pace, and suitably lean grandeur, for this is Spain. But if Tennessee Williams's Camino Real was Purgatory or Sartre's Huis Clos was Hell as a room with three people who couldn't leave, there's wit in Cruel Garden as well as grandeur — scenes alternate in being broadly farcical, as in the hectically coloured and frilled dresses of the eyerolling, stamping and clicking, head-tossing dance of the gypsy girls, or very tough swift and glancing—but still funny — as in the early daneehall sequence. Because this Spain is about as Spanish as it Was in von Sternberg's loony Hollywood vehicle for Dietrich, The Devil is a Woman; but for Cruel Garden where we witness the destruction of art, it's a lot edgier and often frightening, though always visually rich.

But all that has happened so far is merely a prelude to the second half, which' grows out of the scene in which the Lorcagirl-mother weeps over her dead pierrot/children as the singer, Maria Rocca, red hair, pallor, long green dress — who sometimes from a balcony, with the other musicians, points the action below — descends to the arena, the slaughterhouse, and tetchily. distastefully, wretchedly, picks her way over the splayed-out bodies, singing oi rather snarling and keening an ancient lament for dead children — at all times, the selection of music and above all the coordinating new music by Carlos Miranda is magnificent. This is a great theatrical score and, in the way in which ancient and modern music points the action, it's comparable to Maxwell Davies's 0 Magnum Mysterium. Its percussive economy succeeds where Taverner's sprawling Ultimos Ritos " failed.

Then it begins, as transfiguration, this great masterpiece for the English stage. A bicycle is wheeled on, a selection of Lorca's writing on America is declaimed while his essay on Buster Keaton, whom Lorca admired, is enacted with deadpan accuracy by Bruce, bewitching as the sad Keaton among various butterflies, girls with zebrastriped stockings but no faces; and there are indeed 'nightingales in America' as Lorca tells us. All this gives place to disillusionment (the Ode to Walt Whitman) and the blues (Kings of Harlem) sung and danced, and Keaton disappears, only to reappear finally and immaculately as a Spanish dancer in a dinner jacket — to dance with incomparable Style the Haleo, a slow, grand and passionate dance, and this is the fatal invocation, the setting up, the real move in, for the final outrage, the true and absolute death of the poet and the total destruction of art. Lorca's splendid dance is interrupted: he is killed over and over again, borne aloft and dragged and flung across the ground by six killers in black, big leapers and ferocious. To be enmeshed by them is a far cry from the figure in Pierrot Lunaire playing and swinging in his open cage. The Bull, the killer, watches from a staircase with the Lizard by his side before he joins in. Lorca is brutalisdd and killed. The gladiatorial nobility, bravery and pathos is overwhelming, and art is vanquished, it is appalling — and he lurches on again, to try to dance.

Unlike Gielgud or Casares, I don't weep easily, but this dazzling affirmation (from Kemp and Bruce) of life, art, and the pain of being a poet brought me down. The company advance very slowly towards us in a half-circle, as if still in a ritual, and there has been nothing to compare with this on the

English stage since Peter Brook's legendary production of the Oedipus of Seneca with Gielgud, Worth and the National Theatre Company.

Kemp and Bruce's great vision of the slow death of art, and the forces that surround it through the unholy collusion of life and art — which does such honour to Lorca's life and work — makes me feel privileged to be working in the same city as them, with the composer Carlos Miranda, Koltai the designer and the poet David Haughton who got the sequence of Lorca texts together in Spanish and English and whose tight exposition of Lorca in the programme is exemplary.