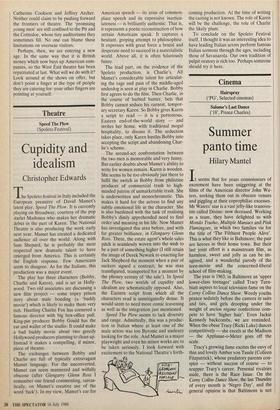 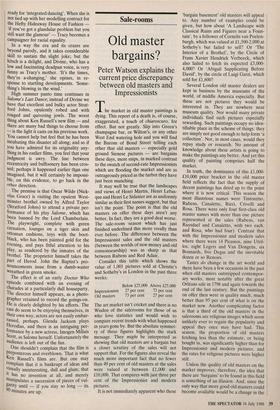 It seems that for years connoisseurs of excrement have been sniggering at the films of the American director John Wa- ters, seeking them out in obscure venues and giggling at their coprophiliac excesses. Mr Waters' star is a vast jelly-like transves- tite called Divine: now deceased. Working as a team, they have delighted us with Mondo Trasho, Multiple Maniacs and Pink Flamingoes, in which two families vie for the title of 'The Filthiest People Alive'. This is what they like in Baltimore; the pair are heroes in their home town. But their last joint effort is a mainstream film, as harmless, sweet and jolly as can be im- agined, and a wonderful parody of the teen-movie and the concerned-liberal school of film-making.

The year is 1963; in Baltimore an 'upper lower-class teenager' called Tracy Turn- blatt aspires to local television fame on the Corny Collins Dance Show. Weedy youths prance sedately before the camera in suits and ties, and girls drooping under the weight of ancien regime confections com- pete to have 'higher hair'. Even Jackie Kennedy backcombs, we are reminded. When the obese Tracy (Ricki Lake) dances competitively — she excels at the Madison — the Applause-o-Meter goes off the scale.

Tracy's growing fame excites the envy of thin and lovely Amber von Tussle (Colleen Fitzpatrick), whose predatory parents con- spire — without success of course — to scupper Tracy's career. Personal rivalries aside, there is the Race Issue. On the Corny Collins Dance Show, the last Thursday of every month is 'Negro Day', and the general opinion is that Baltimore is not ready for Integrateddancing'. When she is not tied up with her modelling contract for the Hefty Hideaway House of Fashion 'if you've got a glandular problem but you still want the glamour' — Tracy becomes a campaigner for racial equality.

In a way the era and its crazes are beyond parody, and it takes considerable skill to sustain the slight joke; but the kitsch is a delight, and Divine, who has a low and fascinating deadpan voice, is very funny as Tracy's mother. 'It's the times, they're a-changing,' she opines, in re- sponse to startling developments. 'Some- thing's blowing in the wind.'

High summer panto time continues in Salome's Last Dance; instead of Divine we have that excellent and bulky actor Strat- ford Johns, opulently robed and with rouged and quivering jowls. The worst thing about Ken Russell's new film — and there are many bad things to choose from — is the light it casts on his previous work. You cannot help but feel that he has been incubating this disaster all along; and so if You have admired for its originality any- thing in his earlier films, you feel that your judgment is awry. The line between eccentricity and buffoonery has been cros- sed; perhaps it happened earlier thAn one imagined, but it will certainly be impossi- ble, on this evidence, to go back in the nther direction.

The premise is that Oscar Wilde (Nick- olas Grace) is visiting the opulent West- minster brothel owned by Alfred Taylor (Stratford Johns) to attend a private per- formance of his play Salome, which has been banned by the Lord Chamberlain. The playwright, complete with green carnation, lounges on a tiger skin and ottoman cushions, toys with the boot- black, who has been painted gold for the evening, and pays fitful attention to his Play, as rendered by the inmates of the brothel. The proprietor himself takes the part of Herod. John the Baptist's pro- nouncements issue from a dumb-waiter wreathed in green smoke. The effect is of an early Doctor Who episode combined with an evening of charades at a particularly dull houseparty. The director himself appears, as a photo- grapher retained to record the goings-on. He is clearly delighted by his efforts. The cast do seem to be enjoying themselves, in their own way; actors are not easily embar- rassed, perhaps. Glenda Jackson plays Herodias, and there is an intriguing per- formance by a new actress, Imogen Millais Scott, as Salome herself. Unfortunately the audience is left out of the fun.

One shouldn't complain that the film is preposterous and overblown. That is what Ken Russell's films are. But one may complain that it is bankrupt of ideas and visually uninteresting, dull and glum; that it has no invention at all, and merely Manipulates a succession of pieces of vul- garity until — if you stay so long — its 90 minutes are up.