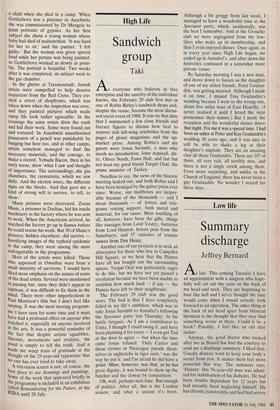 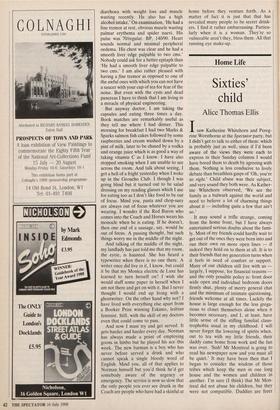 At last. This coming Tuesday I have an appointment with a surgeon who hope- fully will cut out the cysts on the back of my head and neck. They are beginning to hurt like hell and I never thought the time would come when I would actually look forward to an operation. The other thing at the back of my head apart from bilateral lipomata is the thought that they may find something worse in there. Could it be a book? Possibly. I feel like an old dust jacket.

Anyway, the good doctor who looked after me in Bristol has had the courtesy to send me a discharge summary. I liked that. Usually doctors want to keep your body a secret from you. It makes them feel more powerful that way. The summary says, `History: this 56-year-old man was admit- ted for stabilisation of his diabetes. He had been insulin dependent for 12 years but had recently been neglecting himself. He has chronic pancreatitis and had had severe diarrhoea with weight loss and muscle wasting recently. He also has a high alcohol intake.' On examination, 'He had a fine tremor at rest, obvious muscle wasting palmar erythema and spider naevi. His pulse was 70/regular. BP, 140/90. Heart 'sounds normal and minimal peripheral oedema. His chest was clear and he had a smooth liver edge palpable to two cms ' Nobody could ask for a better epitaph than `He had a smooth liver edge palpable to two cms.' I am also rather pleased with having a fine tremor as opposed to one of the awful ones with which you can not have a saucer with your cup of tea for fear of the noise. But even with the cysts and dead pancreas I have to think that I am living in a miracle of physical engineering.

But anyway doctor, I am taking the capsules and eating three times a day. Book matches are remarkably useful as they tell me where I had dinner. This morning for breakfast I had two Marks & Sparks salmon fish cakes followed by some raspberries and cream washed down by a pint of milk, later to be chased by a vodka and orange juice which is as good a way of taking vitamin C as I know. I have also stopped smoking when I am unable to see across the room. And talk about seeing, I got a hell of a fright yesterday when I woke up in the Groucho Club. I though I was going blind but it turned out to be salad dressing on my reading glasses which I use for eating too as I don't like food to be out of focus. Mind you, pasta and chop-suey are always out of focus whatever you are wearing. I wonder if the Red Baron who comes into the Coach and Horses wears his monocle when he is eating. If he doesn't, then one end of a sausage, say, would be out of focus. A passing thought, but such things worry me in the middle of the night.

And talking of the middle of the: night, my landlady has just told me that my room, the eyrie, is haunted. She has heard a typewriter when there is no one there. A writer once did live in it, I know, but could it be that my Monica electric de Luxe has learned to turn herself on? I wish she would stuff some paper in herself when I am not there and get on with it. But I never thought I would end up living with a ghostwriter. On the other hand why not? I have lived with everything else apart from a Booker Prize winning Eskimo, lesbian feminist. Still, with the skill of my doctors even that could come to pass.

And now I must try and get served. It gets harder and harder every day. Norman has always made a point of employing goons in limbo but he played his ace this week. The new barman is a boy who has never before served a drink and who cannot speak a single bloody word of English. Mind you, all of that applies to Norman. himself but you'd think he'd get somebody aware of the urgency or emergency. The service is now so slow that the only people you ever see drunk in the Coach are people who have had a skinful at home before they venture forth. As a matter of fact it is just that that has revealed many people to be secret drink- ers. I find it rather embarrassing. Particu- larly when it is a woman. They're so vulnerable aren't they, bless them. All that running eye make-up.