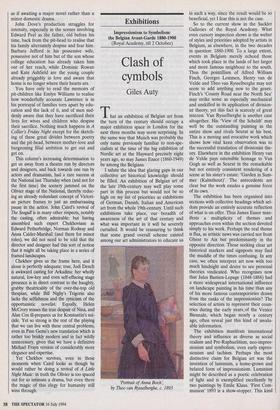 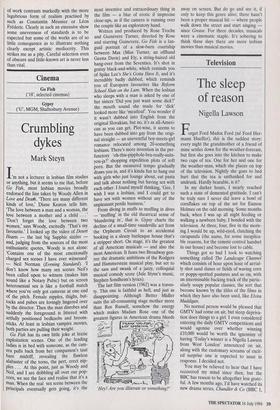 Impressionism to Symbolism: the Belgian Avant-Garde 1880-1900 (Royal Academy, till 2 October)

That an exhibition of Belgian art from the turn of the century should occupy a major exhibition space in London for the next three months may seem surprising. In the same way that Munch was probably the only name previously familiar to non-spe- cialists at the time of the big exhibition of Nordic art at the Hayward precisely eight years ago, so may James Ensor (1860-1949) be among the Belgians.

I salute the idea that glaring gaps in our collective art historical knowledge should be filled. An exhibition of Belgian art of the late 19th-century may well play some part in this process but would not be so high on my list of priorities as exhibitions of German, Danish, Italian and ,American art from the whole 19th-century. Until such exhibitions take place, our breadth of awareness of the art of that century and what was important in it will be severely curtailed. It would be reassuring to think that some grand overall scheme existed among our art administrators to educate us 'Portrait of Anna Boch', by Theo van Rysselberghe, c. 1893 in such a way, since the result would be so beneficial, yet I fear this is not the case.

So to the current show in the Sadder Galleries of the Royal Academy. What even cursory inspection shows is the welter of styles and priorities adopted by artists in Belgium, as elsewhere, in the two decades in question: 1880-1900. To a large extent, events in Belgium merely echoed those which took place in the lands of her larger and more famous neighbour to the south. Thus the pointillism of Alfred William Finch, Georges Lemmen, Henry van de Velde and Theo van Rysselberghe may not seem to add anything new to the genre. Finch's 'County Road near the North Sea' may strike some as especially mechanical and unskilled in its application of division- ist theory, yet this fact is scarcely of great interest. Van Rysselberghe is another case altogether. His `View of the Scheldt' may well be the outstanding painting in the entire show and rivals Seurat at his best. This is a moving and evocative work which shows how vital keen observation was to the successful translation of divisionist the- ory. Elsewhere in the exhibition Henry van de Velde pays ostensible homage to Van Gogh as well as Seurat in the remarkable but not entirely consistent rendering of a scene at his sister's estate: 'Garden in Sum- mer (Kalinthout)'. The antecedents are clear but the work exudes a genuine force of its own.

The exhibition has been organised into sections with collective headings which sel- dom provide an entirely accurate reflection of what is on offer. Thus James Ensor man- ifests a multiplicity of themes and approaches even within the section devoted simply to his work. Perhaps the real theme is flux, as artistic news was carried not from Ghent to Aix but predominantly in the opposite direction. Those seeking clear art historical markers and signposts may find the muddle of the times confusing. In any case, we often interpret art now with too much hindsight and desire to see personal theories vindicated. Who recognises now that Jules Bastien-Lepage (1848-1884) had a more widespread international influence on landscape painting in his time than any of his more famous contemporaries drawn from the ranks of the impressionists? The selection of artists to represent their coun- tries during the early years_of the Venice Biennale, which began nearly a century ago, often reveal just this kind of invalu- able information.

The exhibition manifests international theory and influence as diverse as social realism and Pre-Raphaelitism, neo-impres- sionism and symbolism, even early expres- sionism and tachism. Perhaps the most distinctive claim for Belgian art was the invention of luminism, a home-grown and belated form of impressionism. Luminism might be described as a poetic celebration of light and is exemplified excellently by two paintings by Emile Klaus. 'First Com- munion' 1893 is a show-stopper. This kind of work contrasts markedly with the more lugubrious form of realism practised by such as Constantin Meunier or Leon Frederic. Clearly in such an extensive show some unevenness of standards is to be expected but some of the works are of so little consequence as to illustrate nothing clearly except artistic mediocrity. This strikes me as a pity. Careful selection even of obscure and little-known art is never less than vital.