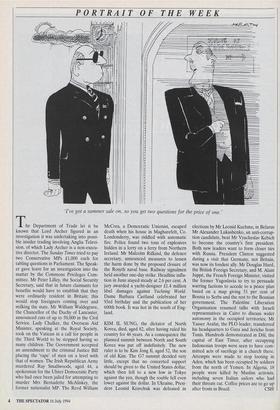 'I've got a summer sale on, so you get two questions for the price of one.'

The Department of Trade let it be known that Lord Archer figured in an investigation it was undertaking into possi- ble insider trading involving Anglia Televi- sion, of which Lady Archer is a non-execu- tive director. The Sunday Times tried to pay two Conservative MPs £1,000 each for tabling questions in Parliament. The Speak- er gave leave for an investigation into the matter by the Commons Privileges Com- mittee. Mr Peter Lilley, the Social Security Secretary, said that in future claimants for benefits would have to establish that they were ordinarily resident in Britain; this would stop foreigners coming over and milking the state. Mr William Waldegrave, the Chancellor of the Duchy of Lancaster, announced cuts of up to 50,000 in the Civil Service. Lady Chalker, the Overseas Aid Minister, speaking at the Royal Society, took on the Vatican in a call for people in the Third World to be stopped having so many children. The Government accepted an amendment to the criminal Justice Bill placing the 'rape' of men on a level with that of women. The Irish Republican Army murdered Ray Smallwoods, aged 44, a spokesman for the Ulster Democratic Party who had once been jailed for attempting to murder Mrs Bernadette McAliskey, the former nationalist MP. The Revd William McCrea, a Democratic Unionist, escaped death when his house in Magharefelt, Co. Londonderry, was riddled with automatic fire. Police found two tons of explosives hidden in a lorry on a ferry from Northern Ireland. Mr Malcolm Rifkind, the defence secretary, announced measures to lessen the harm done by the proposed closure of the Rosyth naval base. Railway signalmen held another one-day strike. Headline infla- tion in June stayed steady at 2.6 per cent. A jury awarded a yacht-designer £1.4 million libel damages against Yachting World. Dame Barbara Cartland celebrated her 93rd birthday and the publication of her 600th book. It was hot in the south of Eng- land.

KIM IL SUNG, the dictator of North Korea, died, aged 82, after having ruled his country for 46 years. As a consequence the planned summit between North and South Korea was put off indefinitely. The new ruler is to be Kim Jong II, aged 52, the son of old Kim. The G7 summit decided very little, except that no concerted support should be given to the United States dollar, which then fell to a new low in Tokyo against the yen, though the rouble fell even lower against the dollar. In Ukraine, Presi- dent Leonid Kravchuk was defeated in

elections by Mr Leonid Kuchma; in Belarus Mr Alexander Lukashenko, an anti-corrup- tion candidate, beat Mr Vyacheslav Kebich to become the country's first president. Both new leaders want to form closer ties with Russia. President Clinton suggested during a visit that Germany, not Britain, was now its fondest ally. Mr Douglas Hurd, the British Foreign Secretary, and M. Alain Juppe, the French Foreign Minister, visited the former Yugoslavia to try to persuade warring factions to accede to a peace plan based on a map giving 51 per cent of Bosnia to Serbs and the rest to the Bosnian government. The Palestine Liberation Organisation resumed talks with Israeli representatives in Cairo to discuss wider autonomy in the occupied territories; Mr Yasser Arafat, the PLO leader, transferred his headquarters to Gaza and Jericho from Tunis. Hundreds demonstrated in Dili, the capital of East Timor, after occupying Indonesian troops were seen to have com- mitted acts of sacrilege in a church there. Attempts were made to stop looting in Aden, which has been occupied by soldiers from the north of Yemen. In Algeria, 18 people were killed by Muslim activists, including seven Italian sailors who had their throats cut. Coffee prices are to go up