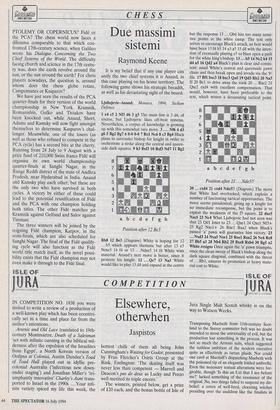 I'01D(ligi1 PTOLEMY OR COPERNICUS? Fide or the PCA? The chess world now faces a dilemma comparable to that which con- fronted 17th-century science, when Galileo wrote his Dialogue Concerning the Two Chief Systems of the World. The difficulty facing church and science in the 17th centu- ry was, does the earth revolve around the sun, or the sun around the earth? For chess players nowadays, the question is, around whom does the chess globe rotate, Campomanes or Kasparov?

We have just seen the results of the PCA quarter-finals for their version of the world championship in New York. ICramnik, Romanishin, Gulko and Tiviakov have been knocked out, while Anand, Short, Adams and Kamsky will now fight amongst themselves to determine Kasparov's chal- lenger. Meanwhile, one of the losers (as well as those who refused to compete in the PCA cycle) has a second bite at the cherry. Running from 24 July to 9 August with a prize fund of 210,000 Swiss francs Fide will organise its own world championship quarter-finals at Sanghi Nagar, in the Range Reddi district of the state of Andhra Pradesh, near Hyderabad in India. Anand and Kamslcy play each other, but these are the only two who have survived in both cycles. A victory by either of these could lead to the potential reunification of Fide and the PCA with one champion holding both titles. The other Fide matches pit ICramnik against Gelfand and Salov against Tinunan.

The three winners will be joined by the reigning Fide champion, ICarpov, in the semi-finals, which are also scheduled for Sanghi Nagar. The final of the Fide qualify- ing cycle will also function as the Fide world title match itself, so the novel possi- bility exists that the Fide champion may not even make it through to the Fide final.

Raymond Keene It is my belief that if any one player can unify the two chief systems it is Anand, in this case playing on his home territory. The following game shows his strategic breadth, as well as his devastating sight of the board.