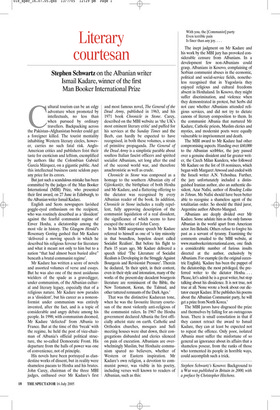 Stephen Schwartz on the Albanian writer Ismail Kadare, winner of the first Man Booker International Prize Cultural tourism can be an edgy adventure when promoted by intellectuals, no less than when pursued by ordinary travellers. Backpacking across the Pakistan–Afghanistan border could get a foreigner killed. The tourist mentality inhabiting Western literary circles, however, carries no such fatal risk. AngloAmerican critics and publishers foist their taste for exoticism and leftism, exemplified by authors like the Colombian Gabriel García Márquez, on a gigantic public. And this intellectual business caste seldom pays any price for its errors.

But just such a scandalous mistake has been committed by the judges of the Man Booker International (MBI) Prize, who presented their first award, on 27 June in Edinburgh, to the Albanian writer Ismail Kadare.

English and Scots newspapers lavished goggle-eyed enthusiasm on the recipient, who was routinely described as a ‘dissident’ against the fearful communist regime of Enver Hoxha, a dictatorship among the most vile in history. The Glasgow Herald’s Rosemary Goring gushed that Mr Kadare ‘delivered a moving speech in which he described his religious fervour for literature and what it meant not only to him but to a nation “that had almost been buried alive” beneath a brutal communist regime’.

Mr Kadare has written a score of novels and assorted volumes of verse and essays. But he was also one of the most assiduous wielders of the spade as a gravedigger, under communism, of the Albanian cultural and literary legacy, especially that of a religious nature. Mr Kadare now parades as a ‘dissident’, but his career as a nonconformist under communism was entirely invented, after the fact, and is a topic of considerable and angry debate among his people. In 1990, with communism doomed, Mr Kadare ‘defected’ from Albania to France. But at the time of this ‘break’ with the regime, he held the post of vice-chairman of Albania’s official political structure, the so-called Democratic Front. His departure from the halls of power was one of convenience, not of principle.

His novels have been portrayed as clandestine works of dissent, but in reality were shameless paeans to Hoxha and his brutes. John Carey, chairman of the three MBI judges, enthused over Mr Kadare’s first and most famous novel, The General of the Dead Army, published in 1963, and his 1971 book Chronicle in Stone. Carey, described on the MBI website as ‘the UK’s most eminent literary critic’ and puffed for his services at the Sunday Times and the Beeb, can hardly be expected to have recognised, in both these volumes, a strain of primitive propaganda. The General of the Dead Army is a simplistic parable about soulless Italian fascist officers and spirited socialist Albanians, set long after the end of the second world war, and therefore anachronistic as well as crude.

Chronicle in Stone was composed as a homage to the southern Albanian city of Gjirokastër, the birthplace of both Hoxha and Mr Kadare, and a flattering offering to the dictator was recognised by every Albanian reader of the book. In addition, Chronicle in Stone includes a really repellent, fully approving description of the communist liquidation of a real dissident, the significance of which seems to have escaped the notice of John Carey.

In his MBI acceptance speech Mr Kadare referred to himself as one of ‘a tiny minority in that boundless, hopeless desert called Socialist Realism’. But before his flight to Paris 15 years ago, Mr Kadare delivered a speech titled ‘The Literature of Socialist Realism is Developing in the Struggle Against Bourgeois and Revisionist Pressure’. Therein he declared, ‘In their spirit, in their content, even in their style and intonation, many of the works of the present-day decadent bourgeois literature are reminiscent of the Bible, the New Testament, Koran, the Talmud, and other tattered remnants of the Dark Ages.’ That was the distinctive Kadarean tone, when he was the favourite literary courtesan of the most violently anti-religious of the communist rulers. In 1967 the Hoxha government declared Albania the first officially atheist state on earth. Catholic and Orthodox churches, mosques and Sufi meeting houses were shut down, their congregations disbanded and clerics silenced on pain of execution. Albanians are overwhelmingly Muslim, but Hoxhaite communism spared no believers, whether of Western or Eastern inspiration. Mr Kadare’s own religion, a devotion to communist power, was visible in his poetry, including verses well known to readers of Albanian, such as this:

With you, the [Communist] party Even terrible pain Is finer than any joy....

The inept judgment on Mr Kadare and his work by the MBI jury has provoked considerable censure from Albanians. In a development few non-Albanians could grasp, Albanians in Kosovo, complaining of Serbian communist abuses in the economic, political and social-service fields, nonetheless recognised that in Yugoslavia they enjoyed religious and cultural freedoms absent in Hoxhaland. In Kosovo, they might suffer discrimination, and violence when they demonstrated in protest, but Serbs did not care whether Albanians attended religious services, and did not try to dictate canons of literary composition to them. In the communist Albania that nurtured Mr Kadare, Catholic priests, Muslim clerics and mystics, and modernist poets were equally vulnerable to imprisonment and death.

The MBI award to Mr Kadare had other compromising aspects. Handing over £60,000 to the Albanian scribbler, the jury passed over a genuine dissident and far greater writer, the Czech Milan Kundera, who followed Mr Kadare on the list of 18 nominees, which began with Margaret Atwood and ended with the Israeli writer A.N. Yehoshua. Further, the jury unfortunately included a distinguished Iranian author, also an authentic dissident, Azar Nafisi, author of Reading Lolita in Tehran. Ms Nafisi should have been better able to recognise a shameless agent of the totalitarian order. So should the third juror, Argentine author Alberto Manguel.

Albanians are deeply divided over Mr Kadare. Some adulate him as the only famous Albanian in the world apart from American actor Jim Belushi. Others refuse to forgive his past as a servant of tyranny. Examining the comments emailed to the MBI website, at www.manbookerinternational.com, one finds a considerable number of furious insults directed at the author, exclusively by Albanians. For example (in the original eccentric English), ‘Kadare has been the puppet of the dictatorship, the most privileged, the preferred writer to the dictator Hoxha.... Please, let’s admit he is a great writer, but stop talking about his dissidence. It is not true, not true at all. None wrote a book about our dictator except Kadare. If he publishes his poems about the Albanian Communist party, he will get a prize from North Korea.’ The MBI jurors have disgraced the prize and themselves by falling for an outrageous hoax. There is small consolation in that if they cannot retract the award to Ismail Kadare, they can at least be expected not to repeat the offence. Only poor, isolated Albania must suffer the misfortune of so general an ignorance about its affairs that a shameless poseur, from the ranks of those who tormented its people in horrible ways, could accomplish such a trick.