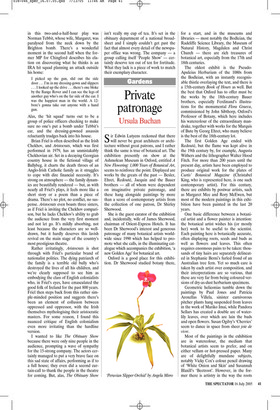 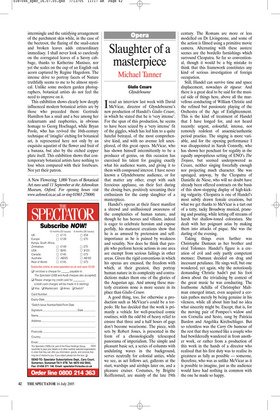 Sir Edwin Lutyens reckoned that there will never be great architects or architecture without great patrons, and I rather think the same is true of botanical art. The exhibition presently on show at the Ashmolean Museum in Oxford, entitled A New Flowering: 1,000 Years of Botanical Art, seems to reinforce the point. Displayed are works by the greats of the past — Besler, Ehret, Redouté, Jacquin and the Bauer brothers — all of whom were dependent on imaginative private patronage, and these hang alongside paintings by more than a score of contemporary artists from the collection of one patron, Dr Shirley Sherwood.

She is the guest curator of the exhibition and, incidentally, wife of James Sherwood, chairman of Orient-Express Hotels. It has been Dr Sherwood’s interest and generous patronage of many botanical artists worldwide since 1990 which has helped to promote what she calls, in the illuminating catalogue which accompanies the exhibition, ‘a new Golden Age’ for botanical art.

Oxford is a good place for this exhibition. Dr Sherwood studied botany there, for a start, and in the museums and libraries — most notably the Bodleian, the Radcliffe Science Library, the Museum of Natural History, Magdalen and Christ Church — there are rich treasures of botanical art, especially from the 17th and 18th centuries.

The oldest exhibit is the PseudoApuleius Herbarium of the 1080s from the Bodleian, with an instantly recognisable thistle overlaying the text, and there is a 15th-century Book of Hours as well. But the best that Oxford has to offer must be the works by the 18th-century Bauer brothers, especially Ferdinand’s illustrations for the monumental Flora Graeca, commissioned by John Sibthorp, Oxford’s Professor of Botany, which here includes his watercolour of the extraordinary mandrake, together with works for the Marquis of Bute by Georg Ehret, who many believe is the best of the 18th-century lot.

The first Golden Age ended with Redouté, but the flame was kept alive in the 19th century by, for example, Augusta Withers and the lithographer Walter Hood Fitch. For more than 200 years until the present day, artists have been employed to produce original work for the plates of Curtis’ Botanical Magazine (Christabel King, who is represented here, is one such contemporary artist). For this century, there are exhibits by postwar artists, such as Margaret Mee and Rory McEwen, but most of the modern paintings in this exhibition have been painted in the last 20 years.

One basic difference between a botanical artist and a flower painter is intention: the botanical artist wishes his (or mostly her) work to be useful to the scientist. Each painting here is botanically accurate, often displaying roots, seeds and buds as well as flowers and leaves. This often requires enormous pains to be taken: thousands of tiny hairs are separately delineated in Stephanie Berni’s furled frond of an Australian tree fern. Yet so much care is taken by each artist over composition, and their interpretations are so various, that these are very far from being coloured versions of dry-as-dust herbarium specimens.

Geometric heliconias tumble down the paintings by Paul Jones and Patricia Aroxellas Villela, sinister carnivorous pitcher plants hang suspended from leaves in the work of Mariko Imai, while Pandora Sellars has created a double arc of waterlily leaves, over which are lain the buds and open flowers. Susan Ogilvy’s ‘Cherries’ seem to dance in space from sheer joie de vivre.

Most of the paintings in the exhibition are in watercolour, the medium that botanical artists seem to prefer, and on either vellum or hot-pressed paper. Many are of delightfully mundane subjects, notably Vicky Cox’s colour pencil drawing of ‘White Onion and Skin’ and Susannah Blaxill’s ‘Beetroot’. However, in the former there is artistry in the way the roots intermingle and the satisfying arrangement of the parchment skin while, in the case of the beetroot, the flaring of the snail-eaten and broken leaves adds extraordinary immediacy. I shall never look so carelessly on the corrugated leaves of a Savoy cabbage, thanks to Katherine Manisco, nor yet the scales on the cup of an English oak acorn captured by Regine Hagedorn. The intense drive to portray facets of Nature truthfully seems to me to be almost mystical. Unlike some modern garden photographers, botanical artists do not feel the need to improve on it.

This exhibition shows clearly how deeply influenced modern botanical artists are by those who preceded them: Gertrude Hamilton has a snail and a bee among her redcurrants and raspberries, in obvious homage to Georg Hoefnagel, while Bryan Poole, who has revived the 16th-century technique of ‘intaglio’ etching for botanical art, is represented here not only by an exquisite aquatint of the flower and fruit of a banana, but also by the etched copper plate itself. This exhibition shows that contemporary botanical artists have nothing to lose when compared with their forebears. Nor yet their patron.