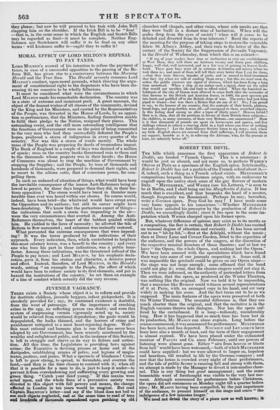 LORD MILTON'S avowal of his intention to refuse the payment of taxes, in case of a successful opposition to the passing of the Re- form Bill, has given rise to a controversy between the Morning Herald and the True Sun. The Herald severely censures Lord MILTON'S conduct, upon moral grounds, which (leaving the argu- ment of constitutional right to the disputants who have been dis- cussing it) we conceive to be wholly fallacious. It must be considered what were the circumstances in which Lord MILTON made his remarkable declaration. The country was in a state of extreme and imminent peril. A great measure, the object of the dearest wishes of all classes of the community, devised by the King and his Ministers, and carried by the Representatives of the People, was thwarted in the House of Lords, by an opposi- tion so pertinacious, that the Ministers, finding themselves unable to fulfil their pledge to the Nation, resigned their places. This astounding event, and the still more astounding intelligence that the functions of Government were on the point of being committed to the very men who had then successfully defeated the People's hopes, produced a storm of indignation in every quarter of the country. Nor was this a storm of words merely. The whole mass of the People was preparing for deeds of tremendous import. The Bank of England in a couple of days was drained of a million of specie; runs on the country banks threatened ruin to them and to the thousands whose property was in their hands ; the House of Commons was about to stop the machine of Government by stopping the Supplies ; and the People, by tens of thousands and hundreds of thousands, were prepared to demand their rights, and to resort to the ultima ratio, that of conscious power, for com- pelling them. In such an unheard-of situation of things, what would have been the inevitable consequence of the insane Anti-Reformers being al- lowed to persist, for three days longer than they did, in their fac- tious opposition ? The storm would have burst in thunder more terrible than ever was heard within our shores. Its course would, indeed, have been brief—the whirlwind would have swept away the Opposition and its authors; but still its career might have been desolating. We know that the portentous aspect of things— the indications that, such a storm was impending in the air— 'were the very circumstances that averted it. Among the Anti- Reformers themselves, the heart of the boldest quailed within him. He yielded to the force of necessity; he allowed the tide of Reform to flow unresisted ; and calmness was instantly restored.

What prevented the extreme consequences that were impend- ing? It was the terror produced by the indications of their approach. Every indication, then, which contributed to heighten this most salutary terror, was a benefit to the country ; and every one who bore his part in those indications, was a public bene- factor. Among these indications, was the threatened refusal of the People to pay taxes; and Lord MILTON, by his emphatic decla- ration, gave it, from his station and character, a decisive power and effect. Instead, therefore, of Lord MILTON, ill the Herald's words, setting "an example to the People, the effect of which would have been to reduce society to its first elements, and put in hazard the institutions of the country," he set them an example of a line of conduct which actually did the very reverse.