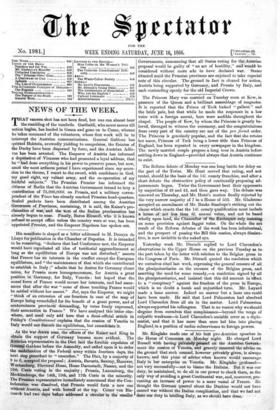 the Upper House on the previous Tuesday as to the part taken by the latter with relation to the Belgian press in the Congress of Paris. Mr. Disraeli quoted the resolution which we ourselves cited last week, expressing the general censure of all the plenipotentiaries on the excesses of the Belgian press, and asserting the need for some remedy,—a resolution signed by all the plenipotentiaries, and insisted that this did amount in effect to a " conspiracy " against the freedom of the press in Europe, which is no doubt a harsh and unjustified term. Mr. Layard made a lame answer. Indeed no answer but a lame one could have been made. He said that Lord Palmerston had absolved Lord Clarendon from all sin in the matter. Lord Palmerston always supported his colleagues. That is no reason why we should disguise from ourselves that complaisance—beyond the verge of culpable weakness—is Lord Clarendon's amiable error as a diplo- matist, and that it has more than once led him into placing England in a position of undue subservience to foreign powers.