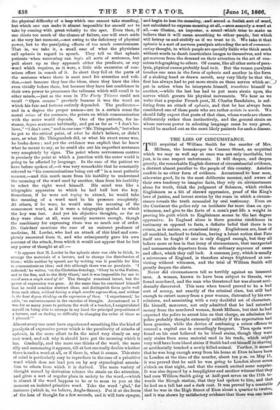 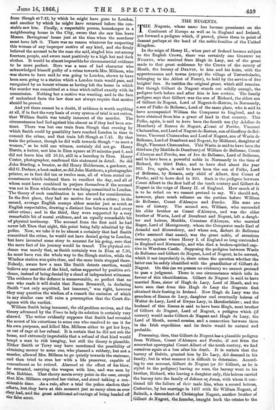 THE LIES OF CIRCUMSTANCE.

THE acquittal of William Smith for the murder -of Mrs.

Millsom, -the housekeeper in Cannon -Street, an acquittal which we may as well say at once was not-only inevitable, but just,.is in one respect unfortunate. It will deepen, and deepen greatly-, the remarkable English distrust of circumstantial evidence, a distrust almost peculiar to the people of this country. Asiatics confide in no other form of evidence. Accustomed to hear men, otherwise good, lie in the most deliberate manner, and aware of their own tendency to imagine facts, they rely on circumstances alone for truth, think the judgment of Solomon, which strikes Englishmen as a hit of shrewd oppression, proof of the King's love of justice, and invent stories-by the ream in which a circum- stance reveals the truth concealed by oral testimony. Even on the Continent the police rely on incidents far more than on eye- witnesses, and give to the facts of a, man's past life a weight in proving his guilt which to Englishmen seems in the last degree oppressive. In England alone is there genuine confidence in testimony as opposed to facts, a definite belief that there is in events, as in nature, an occasional irony. Englishmen are, least of all mankind, inclined to fatalism, having a latent notion that Fate itself can be fought if one is only dogged enough, but they all believe more or less in that irony of circumstance, that unexpected and unreasonable departure from the ordinary sequence of cause and effect, which they call luck. A commoil jury, which is usually a microcosm of England, is therefore always frightened at con- victing without witnesses, and the trial of William Smith will greatly deepen the alarm.

Never did circumstances tell so terribly against an innocent man. A woman, known to have been subject to threats, was found murdered, and the man who threatened her was almost acci- dentally discovered. This man when traced proved to be a bad sort of scamp, not exactly of the criminal class, but still bad enough to extort money from a poor woman, distrusted by his own relations, and associating with a very doubtful set of characters. He himself, moreover, not only admitted that he had extorted money from the murdered woman, Sarah Millsom, but that he had expected the police to arrest him on that charge, an admission the police probably thought extremely unlikely if the expectation had been genuine, while the device, of confessing a minor offence to conceal a capital one is exceedingly frequent. Then spots were found on his coat believed to be blood stains, though they were only stains from some material used in his trade, which might verywell have been blood stains if Smith had cut himself in shaving or accidentally touched a newly killed animal. Further, it seemed that he was long enough away from his home at Eton to have been in London at the time of the murder, about ten p.m. on May 111 it was proved that he said he was going to London about seven o'clock on that night, and that the remark excited some surprise. It was also deposed by a lamplighter and another witness that they had seen William Smith going at half-past seven on the 11th to- wards the Slough station, that they had spoken to him, and that he had on a tall hat and a dark coat. It was proved by a constable that he was in the High Street of Eton about a quarter to twelve, and it was shown by satisfactory evidence that there was one train

from Slough at 7.43, by which he might have gone to London, and another by which he might have returned before the con- stable saw him. Finally, a respectable person, housekeeper in a neighbouring house in the City, swore that she saw him leave Messrs. Bevingtons' house just at the time when the murderer must have left it. There was no reason whatever for suspecting this woman of any improper motive of any kind, and she firmly believed the accused to be the man she said, singled him out among fourteen people, and swore most positively to a high hat and dark clothes. It would be almost impossible for circumstantial evidence to be more perfect. Here was a man of bad character who acknowledged himself guilty of a crime towards Mrs. Millsom, who was shown to have said he was going to London, shown to have been seen going to a station which a London train would peas, and recognized by an honest witness as having left the house in which the murder was committed at a time which tallied exactly with its commission. Nothing but a motive was wanting, and in the face of =doubted facts the law does not always require that motive should be proved.

And yet there cannot be a doubt, if evidence is worth anything at all, if in fact the very basis of every system of trial is not rotten, that William Smith was totally innocent of the murder. The -circumstances had lied against him almost as if they had been sen- tient. There was but one train from Slough that evening by which Smith could by possibility have reached London in time to commit the crime, and that train left Slough at 7.43. By that train the prisoner, though he did walk towards Slough "to meet a woman," as he told one witness, certainly did not go. Henry Harris, a hatter, met him in Eton square at 20 minutes past 6, and did not leave him till 10.10, still in a beershop in Eton. Henry Coster, photographer, confirmed this statement in detail.. So did John Starling, a brazier, so did Henry Holderness, a gardener, so -did G. Dodner, a boot-maker, so did John Matthews, a photographic printer, so in fact did ten or twelve men, all of whom stated cir- cumstances which induced them to recollect the day, and all of whom must have combined to perjure themselves if the accused was not in Eton while the murder was being committed in London. The theory of such combination is too absurd for consideration. In the first place, they had no motive for such a crime ; in the eecond, average English scamps abhor murder just as much as English respectables, drawing a.distinct line between it and every -other crime ; and in the third, they were supported by a very remarkable bit of moral evidencesand an equally remarkable bit -of physical testimony-. The accused from the first said he had never left Eton that night, this point being fully admitted by the police. 'Now, we take it to be almost a certainty that had Smith 'committed the crime, he would not have denied going to London, but have invented some story to account for his going, sure that the mere fact of his journey would be traced. The physical evi- dence was merely that, as Smith certainly was in Eton at 7.30, lie must have run the whole way to the Slough station, while the Windsor station.was quite close, and the same train stopped there. Nobody, aware how a man like 'Smith detests exertion, would believe any assertion of the kind, unless supported by positive evi- dence, instead of being denied by a cloud of independent witnesses. 'The evidence for the defence is unanswerable,. so perfect that no -one who reads it will doubt that Baron Bramwell, in declaring -Smith "not only acquitted, but irosocent," was right, however they may question the wisdom of a remark the omission of which in any similar, case will raise a presumption that the Court dis- agrees with the verdict.

William Smith being innocent, the old problem revives, and the theory advanced by the Times to help its solution is certainly very ehrewd. The writer evidently supposes that Smith had revealed the secret of his extortions to some one Who resolved to use it for his own purposes, and, killed Mrs. Millsom either to get her keys, or out of rage at her refusal. It is certain that he did not rob the house, and extremely improbable that a refusal of that kind would tempt a man to risk hanging, but still the theory is plausible. Either Smith or Terry may have mentioned the possibility of obtaining money to some one, who planned a robbery, but not a murder, allowed Mrs. Millions to go quietly towards the staircase, and then tried to stun her with a life preserver, capable of concealment as he retired. Alarmed at the effect of his blow, lie retreated, carrying the weapon with him, and was seen by Mrs. Robbins. That theory meets every point in the case, except that Mrs. Millsom expected her visitor, and stood talking a con- siderable time. As a rule, after a trial the police slacken their efforts, but they have at this moment just as many clues as ever they had, and the great additional advantage of being headed off the false scent.