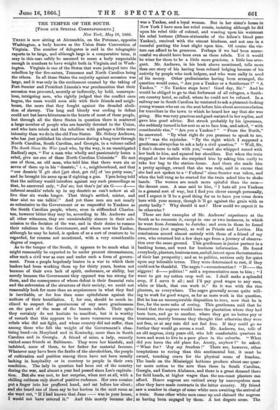 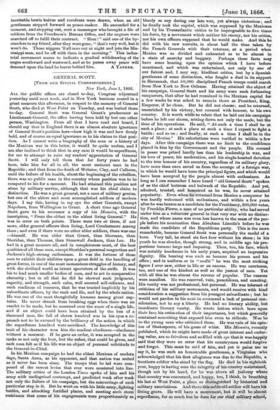 THE TEMPER OF THE SOUTH.

[Fitoii OUR SPECIAL CORRESPONDENT.] New York, May 18, 1866. Timex is now sitting at Alexandria, on the Potomac, opposite Washington, a body known as the Union State Convention of Virginia. The number of delegates is said in the telegraphic reports to be large, and although large is a comparative term, it may in this cans safely be assumed to mean a body respectable enough in numbers to have weight both in Virginia and in Wash- ington. Virginia is one of the States that were jockeyed into the rebellion by the fire-eaters, Tennessee and North Carolina being the others. In all these States the majority against secession was large, and it was only in the excitement created by the taking of Fort Sumter and President Lincoln's war proclamation that their secession was procured, secretly or indirectly, by bold, unscrupu- lous, intriguing men, who rightly judged that the conffict once begun, the mass would soon aide with their friends and neigh- bours, the more that they fought against the dreaded aboli- tion of slavery. The long and bloody war ending in defeat could not but leave bitterness in the hearts of most of these people, but through all the three States in question there is scattered a large number of people who are heartily devoted to the Union, and who hate rebels and the rebellion with perhaps a little more intensity than we do in the old Free States. Mr. Sidney Andrews, who has just published his observations during a long tour through North Carolina, South Carolina, and Georgia, in a volume called The South Since the War (and who, by the way, is an unmitigated Radical) says, "For a man who wholly and passionately hates a rebel, give me one of these North Carolina Unionists." He met one of them, an old man, who told him that there were six or seven of them up in his " deestric," i. e., neighbourhood, and that "our deestric '11 git shet [get shut, get rid] of 'em putty soon," and he brought his arms up as if sighting a gun. Upon being told' that the military would interfere against any such proceedings as that, he answered only, " jes' so; but thar's jes' six G— d— infernal sneakin' rebels up in my deestaic as can't nohow at all live thar six weeks longer. That thing's settled, mister, and thar aint no use talkie." And yet these men are not nearly so submissive to the Government or so respectful to Yankees as the South Carolina people, where, even in stiffnecked Charles- ton, however bitter they may be, according to Mr. Andrews and all other witnesses, they are unmistakably sincere in their sub- mission to the decision of the war, and in their desire to resume their relations to the Government, and where now the Yankee, although he may be hated, is spoken of as a sort of creature to be regarded, for reasons not mentioned, with a very considerable degree of respect.

As to the temper of the South, it appears to be much what it might reasonably be expected to be under present circumstances, after such a civil war as ours and under such a form of govern- ment. From a people hopelessly beaten in a war to which their leaders had been working them up for thirty years, beaten not because of their own lack of spirit, endurance, or ability, but merely because the Government they opposed was too strong for them, and the consequence of whose defeat is their financial ruin and the subversion of the structure of their society, we could not reasonably look for more than an acquiescence in what they find is inevitable, or for less than some spitefulness against the authors of their humiliation. I, for one, should be much in-

clined to suspect the genuineness of any more graciousness on the part of the mass of the beaten rebels. Their spite they certainly do not hesitate to manifest, but it is worthy of remark that this appears to be more venomous among the rebels who did not fight, and whose country did not suffer, than among those who felt the weight of the Government's chas- tising hand—in Maryland and in Kentucky, more than in South Carolina and in Georgia. A friend of mine, a lady, recently visited some friends at Baltimore. They were her kinsfolk, and indebted, some of them, to her father for material favours. Whatever may have been the faults of the slaveholders, the people of cultivation and position among them have not been usually lacking in hospitality or in courtesy to people in their own condition. The lady in question had been out of the country during the war, and almost a year had passed since Lee's capitula- tion. But she was met, to her surprise, when met at all, with a chilling coldness only short of positive rudeness. Her own cousins put a finger into her proffered hand, and sat before her silent; and she heard one of them say to her hostess in the next room as she went out, "If I had known that Jane — was in your house, I would not have entered it." And this merely because she was a Yankee, and a loyal woman. But in her sister's house in New York I have seen her rebel cousin, insisting although he did upon his rebel title of colonel, and wearing upon his waistcoat his rebel buttons (fifteen-sixteenths of the fellow's blood pure Yankee), received with the utmost kindness, and not one in a roomful putting the least slight upon him. Of course the vic- tors can afford to be generous. Perhaps if we had been unsuc- cessful we should have been even as these rebels. Yet it would be wiser for them to be a little more gracious, a little leas arro- gant. Mr. Andrews, in his book above mentioned, tells more than one story of his having been refused lodging because of his nativity by people who took lodgers, and who were sadly in need of his money. Other preliminaries having been arranged, the question would come, "Are you a Yankee or a Southerner ?" "A Yankee." "No Yankee stops here ! Good day, Sir." And he would be obliged to go to that forlomest of all refugees, a South- ern country hotel, so called, where he could not be refused. In a railway car in South Carolina he ventured to ask a pleasant-looking young woman who sat on the seat before him about accommodation for travellers in the town to which he heard her say that she was going. She was very gracious and good-natured in her replies, and gave him good advice. But struck probably by his ignorance, she suddenly turned in her seat so as to face him, and asked, "with considerable vim," "Are you a Yankee ? " "From the North," he answered. "By what right do you presume to speak to me, Sir ? " was the rejoinder. "By the right which I supposed a gentleman always has to ask a lady a civil question." "Well, Sir, I don't choose to talk with you,"—and she whipped round with her back to him, and squared her shoulders. But when the train stopped at her station she surprised him by asking him coolly to take her bag to the station -house. And there she made him a pretty apology, owned that she was rude, said in excuse that she had not spoken to a " F ederal " since Sumter was taken, and when the bell rang as he started for the train asked him to shake hands. The women are much more spiteful than the men- the decent ones. A man said to him, "I hate all you Yankees in a general sort of way, but I find you clever enough personally, and I expect it '11 be a good thing for us to have you come down here with your money, though it '11 go against the grain with us pretty badly," Why should it not? How could we expect it to be otherwise ?

These are fair examples of Mr. Andrews' experience at the South as he recounts it, except in one or two instances, in which he went from Jerusalem to Jericho; and even in those he found Samaritans (not negroes), as well as Priests and Levites. His conclusions accord almost entirely with those of a friend of my own, who returned but a few days ago from a journey of observa- tion over the same ground. This gentleman is junior partner in a banking house, and went for business information. He found everybody, planters, business men, and all, intent upon the restoration of their lost prosperity ; and as to politics, anxious only for quiet upon any tolerable terms. They were determined to rest, if they could not be thankful. The negro ? —reconstruction ? "D— the niggers I d— politics ! " said a representative man to him ; "I want to get my cotton crop well on. I shall make a splendid crop, if I serve it all ; and I'll pay good wages to any men, white or black, that can work it." So it was with the rice planters, so everywhere. The negro generally seems quite will- ing to work for good wages, as far as mere work is the question. But he has an unconquerable disposition to rove, now that he is free, for the mere sake of roving. This gentleman said that he found that the negroes would leave the plantation where they had been born, and go to another, where they got no better pay or treatment, merely because they thought that otherwise they were not free, or at any rate did not feel free. If they could go no further they would go across a road. Mr. Andrews, too, tells of an old negress, sixty years old, who left comfortable quarters in town and went to live in a poor place in the suburbs. "What did you leave the old place for, Aunty, anyhow ?" he asked. "What fur? 'Joy my freedom !" There are, however, other temptations to roving than this sentimental but, it must be owned, touching crave for the physical sense of freedom. The lands on the Mississippi bottoms produce about one quar- ter more cotton to the acre than those in South Carolina, Georgia, and Eastern Alabama, and there is a great demand there for field hands, at higher wages than the sea-coast planters can

afford. Hence negroes are enticed away by unscrupulous men after they have made contracts in the latter country. My friend saw a number in charge of some white men awaiting the arrival of a train. Some other white men came up and claimed the negroes as having been engaged by them. A hot dispute arose. The inevitable bowie knives and revolvers were drawn, when an old gentleman stepped forward as peace-maker. He succeeded for a moment, and stepping oat, sent a messenger who brought a file of soldiers from the Freedmen's Bureau Office, and the negroes were marched off to fulfil their contract. " Hem ! " said one of the by- standers to my friend, after they were gone, "that's very well, but it won't do. Those niggers 'llall ooze out at night and join the Mis- sissippi men, and be off with them in the morning." This indus- trial movement seems to indicate a gradual withdrawing of the negro southward and westward, and as he passes away peace will

descend upon the land he leaves behind him. A YANKEE.