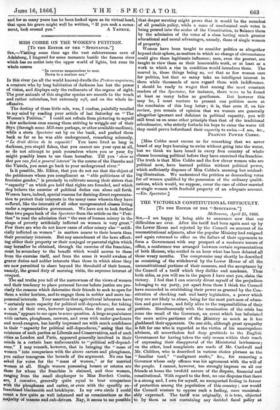 MISS COBBE ON THE WOMEN'S PEITTION. [To TILE EDITOR OF

THE "SPECTATOR.") Sin,—Visiting some time ago the vast subterranean cave of Adelsberg, I lingered for some moments beside the famous river which has no outlet into the upper world of lights, but runs its whole course "In caverns measureless to man Down to a sunless sea."

In this river (as all the world knOws) dwells the Proteus anguineus, a creature who by long habitation of darkness has lost the power of vision, and displays only the rudiments of the organs of sight. The poor animals of this singular species are smooth to the touch and rather colourless, but extremely soft, and on the whole in- offensive.

The destiny of these little eels, was, I confess, painfully recalled to my mind by reading your article of last Saturday on "The

Women's Petition." I could not refrain from picturing to myself a few audacious ones among them striving to wriggle out of their Styx (through some Mill-race perhaps, or other available medium), while a stern Spectator sat by on the bank, and pushed them back as far as he was able underground, remarking solemnly, "Le droll derive de is capacite! You have lived so long in darkness, you stupid fishes, that you cannot use your eyes at all, so do not attempt to push yourselves where you or your fry might possibly learn to use them hereafter. Till you 'show us that you can feel.a general interest' in the course of the Danube and the Vistula, you must go back to your underground river."

Is it possible, Mr. Editor, that you do not see that the object of the petitioners whom you compliment as "able politicians of the feminine gender," is precisely to cultivate among their sisters that " capacity " on which you hold that rights are founded, and which they believe the exercise of political duties can alone call forth. Women have, indeed, special reasons for desiring direct representa- tion to protect their interests in the many cases wherein they have suffered, like the interests of all other unrepresented classes living under a representative government. We have not to look further than two pages back of the Spectator from the article on the "Peti- tion" to read the admission that "the sum of human misery in the shape of poverty artificially inflicted on women is very great." Few there are who do not know cases of other misery also "artifi- cially inflicted on women" in matters nearer to their hearts than their pecuniary interests. But any amendment of the laws affect- ing either their property or their conjugal or parental rights which may hereafter be obtained, through the exercise of the franchise, must be secondary to the benefit which would accrue to them from the exercise itself, and from the sense it would awaken of graver duties and nobler interests than those in which alone they are now permitted to share beyond the threshold of their homes, namely, the grand duty of morning visits, the supreme interest of croquet.

The sad truths you tell of the narrowness of the views of women and their tendency to place personal favour before justice are pre- cisely the reasons which determine their friends to seek to open for them a wider horizon, and to engage them in nobler and more im- personal interests. Your assertion that agricultural labourers have "certainly more capacity for political self-dependence, for taking a view of their own, however ignorant, than the great mass of women," appears to me open to some question. A large acquaintance with carters, ploughmen, mowers, and even with under-gardeners and wood-rangers, has hardly impressed me with much confidence in their "capacity for political self-dependncee," seeing that the existence of such parties as Liberals and Conservatives, and of such cities as London and Paris, appeared generally involved in their minds in a certain haze unfavourable to "political self-depend- ence." I may remark, however, that in bringing the "mass of women" into comparison with the above carters and ploughmen, you rather transgress the bounds of the argument. No one has asked for votes for the "mass of women," or for married women at all. Single women possessing houses or estates are those for whom the franchise is claimed, and these women, ranging from the small shopkeeper to Miss Burdett Coutts, are, I conceive, generally quite equal to bear comparison with the ploughman and carter, or even with the speedily en- franchised blacksmith and bricklayer. In my own circle I could count a few quite as well informed and as conscientious as the majority of masons and cab-drivers. Nay, it seems to me possible that deeper scrutiny might prove that it would be the soundest of all possible policy, while a mass of uneducated male votes is being poured into the scales of the Constitution, to balance them by the admission of the votes of a class having much greater educational and moral advantages, namely, those of single women of property.

Women have been taught to consider politics as altogether beyond their sphere, as matters in which no change of circumstance could give them legitimate influence; men, even the poorest, are taught to view them as their honourable work, or at least as a work to which a rise in condition would introduce them. The marvel is, these things being so, not that so few women care for politics, but that so many take an intelligent interest in them while thousands of men regard them with indifference. I should be ready to wager that among the most constant readers of the Spectator, for instance, there were to be found at least as many ladies as gentlemen. But however this may be, I must venture to present one petition more at the conclusion of this long letter ; it is, that even if, on fair review, you remain of opinion that we women are generally altogether ignorant and deficient in political capacity, you will still treat us on some other principle than that of the traditional schoolmaster, who strictly forbade his boys to enter the water till they could prove beforehand their capacity to swim.—I am, &c., FRANCES POWER COBBE.

[Miss Cobbe must excuse us for remarking that we never heard of any boys learning to swim without going into the water, but we think we have head in every free country of whole classes becoming political before they have exercised the franchise. The truth is that Miss Cobbe and the few clever women who are political now, have learned politics without political power, which sufficiently disposes of Miss Cobbe's amusing but mislead- ing illustration. We understood the petition as demanding votes for all women qualified by the possession of the ordinary qualifi- cations, which would, we suppose, cover the case of either married or single women with freehold property of an adequate amount. —En. Spectator.]