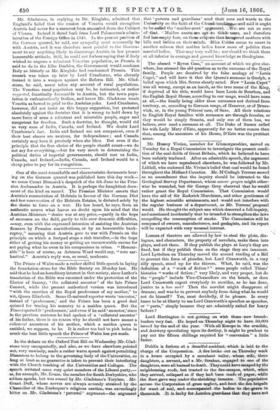 Mr. Gladstone, in replying to Mr. Kinglake, admitted that England's

belief that the cession of Venetia would strengthen Austria had never for a memeiat.been oencealedArom the Cabinet of Vienna. Indeed it dated back from Lord Palisersten'e admin- istration of the Foreign Office in 1848. In the present position of the German quarrel, he said, our sympathy must necessarily 'be with Austria, and it was therefore most painful to the Govern,- ment to say anything likely to discourage Austria in her present honourable attitude. Still, he could not forbear saying that if Italy wished to engross a reluctant Venetian population, as Prussia is said to do in the Elbe Duchies, the Government would condemn Italy as bitterly as Mr. Kinglake had condemned Prussia. This remark was taken up later by Lord Cranborne, who cleverly turned it into a weapon against the Reform Bill. Mr. Glad- stone, he said, never takes any account of rural populations. The Venetian rural population may be, he intimated, or rather suggested, fanatically favourable to Austria, but the town popu- lation is enthusiastically Italian, and hence Mr. Gladstone treats Venetia as bowed in grief to the Austrian yoke. Lord Cranborne, however, did not insist on this happy suggestion, but protested absolutely against the doctrine that it is wrong to hold down by mere force of arms a reluctant and miserable people, eager and competent for freedom. Such a doctrine, he thought, would rid us very soon of India, Canada, and Ireland. We doubt Lord Cranborne's fact. India and Ireland are not competent, even if their best classes are anxious, for independence ; and Canada certainly may have it precisely when she likes. But even if the principle that the free choice of the people should count—we do not say for everything,—but for very much in determining the political duties of imperial governments, should cost us India, Canada, and Ireland,—India, Canada, and Ireland would be a 'cheap price to pay for its recognition.