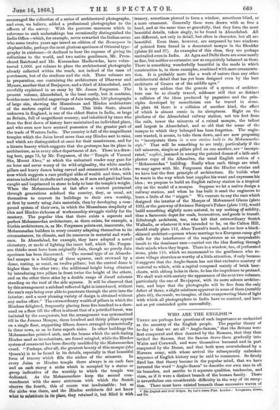 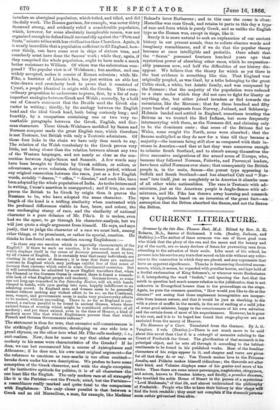 WHO ARE THE ENGLISH?*

THERE are perhaps few questions of such importance so undecided as the ancestry of the English people. The popular theory of to-day is that we are all "Anglo-Saxons," that the Britons were first conquered and then deserted by the Romans, that they then invited the Saxons, that the Saxons drove them gradually into Wales and Cornwall, and were themselves harassed and in part conquered by the Danes, and that both viere overwhelmed by a Norman army, with whose arrival the subsequently unbroken sequence of English history may be said to commence. So firmly fixed has that theory become in the popular mind, that we have invented the word "Anglo-Saxon" to describe our own race in all its branches, and ascribe to it separate qualities, tendencies, and vices, as if it were a distinct branch of the human family. There is nevertheless one considerable difficulty in the way of its recep- tion. There must have existed beneath these successive waves of • The English and their Origin. By Lake Owen Pike. London : Longman', Green, and Co. invaders an aboriginal population, which toiled, and tilled, and did the daily work. The Roman garrison, for example, was never thirty thousand strong, and evidently ruled a considerable population, which, however, for some absolutely inexplicable reason, was not organized enough to defend itself successfully against the "Picts and Scots," minute tribes with less civilization than Cherokees. Again, it is nearly incredible that a population sufficient to fill England, how- ever thinly, can have come over in ships of sixteen tons, and somebody must have done the Saxons' work ; while they, again, if they comprised the whole population, ought to have made a much better resistance to William. Of whom was the substratum com- posed? The popular view is of Welshmen; but another, and one widely accepted, makes it consist of Roman colonists ; while Mr. Pike, a barrister of Lincoln's Inn, has just written an able but wire-drawn and crotchetty book to prove that it consisted of Cymri, a people identical in origin with the Greeks. This extra- ordinary proposition he endeavours to prove, first, by a list of very imperfect analogies between Greek and Welsh ; secondly, by a bold use of Casar's statement that the Druids used the Greek cha- racter in writing ; thirdly, by the analogy between the English head and the ideal Greek head, both being curiously long ; and fourthly, by a comparison containing one or two very re- markable paragraphs between the Greek, English, and Ger- man characters. These Greek-Welshmen modified by Saxon and Norman conquest made the great English race, which therefore is not Teutonic, but British with only a Teutonic admixture. Of these four links in the chain we have only thus much to say. The relation of the Welsh vocabulary to the Greek proves very little, not being closer than the relation between almost any two of the Western languages, and not nearly so close as the con- nection between Anglo-Saxon and Sanscrit. A few words may have been brought. to Britain by Greek soldiers, or sailors, or adventueers, or even colonists, during the Roman period, without any original connection between the noes, just as a few English words, notably "decree," "office," "dismiss," and such like, have been adopted by the whole population of India. As to the lettersused in writing, Casar'e assertion is unsupported ; and if true, no more proves the British to be Greek by origin than it proves the Russians to be, who have adopted the same character. The length of the head is a trifling similarity when contrasted with the profound differences visible in face, brow, and colour, the one unchanging stamp of race, and the similarity of national character is a pure delusion of Mr. Pike's. It is useless, even had we the space, to go through his character-analysis, but we will just quote a single argument from himself. He says, and says justly, that to judge the character of a race we must look, among other thinga, at its prominent, or rather its special, emotion. He thinks he has found such an emotion among Englishmen :- "Is there any one emotion which is especially charaoteristic of the English? If there be such an emotion, it is the emotion of Shame, which displays itself in the sense of decency possessed, more or less, by all &asses of English. It is-certainly true that many individuals are wanting in that sense of deoeney ; it is trite that there are national customs -in England which may perhaps exhibit less of that sense of decency than customs which exist in some Continental countries. But it will nevertheless be admitted by most English travellers that, when the Channel or the German-Ocean is crossed, there is found a remark- able lack of what English people call modesty. German lovers, as some one not long ago remarked in the Saturday Review, will sit, with hands clasped in hands, with eyes gazing into eyes, happily indifferent to an admiring crowd. In England men and women seem to be generally modest without making any violent effort to be so ; on the Continent, men, women, and governments seem to make very praiseworthy efforts to be modest, without succeeding. There is, so far as England is con- cerned, a curious parallel to be found in ancient Greece, where there existed forms of worship which might be considered subversive of all modesty ; and yet there existed, even in the time of Homer, a kind of modesty more like that which Englishmen possess than that which French and German Governmentsvenforoe."

The statement is thus far true, that exoessive self-consciousness is the strikingly English emotion, developing on one side into a proud shyness, on the other into what Mr. Pike calls modesty, i. e., anti-realism. Now, does he mean to say that either shyness or modesty in his sense were characteristics of the Greeks? If he does, we can but recommend him a course of Aristophanes and Athenteus ; if he does- not, his own most original argument—for the reference to emotions as race-marks is too often omitted— breaks down under his own description. We profess to have some conception of the Greek character, and with the single exception of its instinctive aptitude for politics, it is of all characters the one least like the English. The only modern race at all strangely like it is the Parisian—not the French, mind, but the Parisian- s resemblance really marked and quite fatal to the comparison with Englishmen. The only closer parallel is that between a Greek and an old Marseillese, a man, for example, like Madame ,

Roland's lover Barbarous; and in this case the cause is clear,. Marseilles was once Greek, and retains in parts to this day a type- of race and form which is purely Greek, and as unlike the English type as the Roman was, except in tinge, like it.

Surely it is-more natural to seek an explanation of our ancient history in our present annals, than to collate obscure words and imaginary resemblances, and if we do that the popular theory becomes at once intelligible and probable. Once admit that the "Saxon" possessed fourteen hundred years ago that mysterious power of absorbing other races, which he unquestion- ably possesses now, and half the difficulties of our history dis- appear. We believe that the theory for which as yet there is the best evidence is something like this. That England was- originally peopled, as was Gaul, by a tribe belonging to the great. Celtic stock, a white, but Asiatic family, and was conquered by the Romans ; that the majority of the population were reduced to a state under which they did not care to fight for liberty or- anything else, but either joined invaders or fled towards the mountains, like the Maroons ; that for three hundred and fifty years bands of emigrants from Norway, Jutland, and Schleswig- Holstein landed and settled in England, sometimes treating the Britons as we treated the Red Indians, but more frequently intermarrying with them, as the Normans did, and claiming only to be the dominant caste ; that some of the Britons fled to Wales, some sought the North, some were absorbed ; that the Saxons multiplied as they do now for a time till they became a. majority—the increase being still slow as compared with their in- crease in America—and that at last they were numerous enough to colonize South Scotland, and to absorb among themselves the- three successive emigrations of the armed scum of Europe, who,. because they followed Norman, Poitevin, and Provençal leaders,. have been called Normaus ever since; that consequently the British people is, in the main, Saxon—the purest type appearing in Suffelk and South Scotland—and has absorbed Celt and "Nor- man" into itself, just as completely as in America it absorbs men- of all other white nationalities. The race is Teutonic with ad- .mixtures, just as the American people is Anglo-Saxon with ad- mixtures, and Mr. Pike has thrown away learning and research upon a hypothesis based on an inversion of the great fact—am assumption that the Briton absorbed the Saxon, and not the Saxon the Briton.