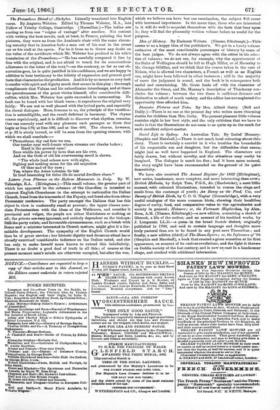 Letters from Florence on Me. Bettina - Movements in Italy. By

W. Talmadge, B.A. (Rivingtons.)--This -small volume, the greater part of which has appeared in the columns of the Guardiln, is intended to interest English Churchmen in the. attempt to Inationalize the Italian Church, freed from the trammels of the Papacy, and freed also from ultra/. Protestant tendencies: The party amongst the Italians that has this object in view is confessedly small at present ; the tipper classes asso- ciate Protestantism with the ideas of the Waldenses, and consider it provincial and -vulgar, the, people are either Mariolatera or nothing. at all; the priests Brewery ignorant, and entirely dependent on the bishops.' Still the party exists, and favourable circumstances, such as a break-With Rome and' a minister interested in Church matters, might give it'a for- midable development. The sympathy of the English Church would then be of great service-; her historic dignitrand decorous-ritual have alreafty'exercised considerable influence on the 'Italian mind, and she has . only, to make herself more known to extend this indefinitely. There is no doubt a good deal of truth in all this; of course at the preheat moment =We minds are otherwise' occupied, but after the war, which we believe can have but one termination, the subject *ill recur- with increased importance. In the mean time, those who are interested' in it will do well to acquaint themselves -with the bete that bear upon- it ; they will find the pleasantly written volume before us useful for the. purpose.