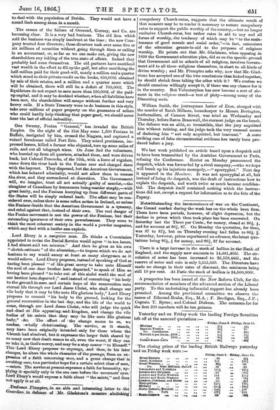 One Sweeny, Fenian "General," has invaded the British Empire. On

the night of the 31st May some 1,300 Fenians in Buffalo, instigated by him, crossed the Niagara, and captured a rained farmhouse called Fort Erie. They seized provisions, Im- pressed horses, killed a farmer who objeeted,tore up some miles of rails, and cut all telegraph wires. On June 2nd the volunteers, who hurried up from all quarters, attacked them, and were driven back, but Colonel Peacock; of.the 16th,,with a force of regulars, -came down the river bank to the Fenian rear and. charged Ahem with the bayonet. They dispersed, but the American Government, which has behaved admirably, would not allow them to recross the river, and they surrendered at discretion. The Government will, we imagine, treat all not actually guilty of murder,—the slaughter of Canadians by-buccaneers being murder simply,—with great lenity, and the Fenians hurrying up from different parts of the States will be simply ordered back. The affair may be con- sidered over, unless there is some reflex action in Ireland, or unless -the Fenians decide that the American Government is a tyranny, and rebel against that,-instead of their own. The real danger of the Fenian movement is not the power of• the Fenians, but their astounding ignorance of their own powerlessness. They seem to think the most coherent society in the world a powder magazine, which-any fool with a lucifer can explode.