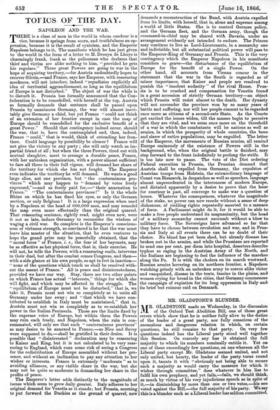 NAPOLEON AND THE WAR.

THERE is a class of men in the world in whom candour is a vice, because it springs from scorn, and truthfulness an op- pression, because it is the result of cynicism, and the Emperor Napoleon belongs to it. The manifesto which he has just given to the world in the form of a letter to M. Drouyn de Lhuys is charmingly frank, frank as the policeman who declares that thief and victim are alike nothing to him, "provided he gets his regulars." Three great Powers are going to war in the hope of acquiring territory,—for Austria undoubtedly hopes to recover Silesia,—and France, says her Emperor, with reassuring meekness, will not interfere, indeed "repudiates explicitly all idea of territorial aggrandizement, so long as the equilibrium of Europe is not disturbed." The object of war the while is to disturb it. Prussia has formally announced that the Con- federation is to be remodelled, with herself at the top, Austria as formally demands that sentence shall be passed upon Prussia by unanimous Germany, the war will almost inevi- tably give Germany a chief, but yet France "could not think of an extension of her frontier except in case the map of Europe should be remodelled for the exclusive benefit of a great Power." Should that contingency indeed occur, should the war, that is, have the contemplated end, then, indeed, France "could," that is would, think of extending her fron- tiers. Could language by possibility be clearer ? France will not give the victory to any party ; she will only watch as im- partial friend of all ; but when the three Powers, tired out with mutual slaughter, meet to arrange a durable peace, France, with her unbroken organization, with a power almost sufficient to face all three in their full vigour, will demand her share of the territory for which she has not fought. The Emperor even indicates the territory he will demand. He wants a good large slice, not one province, but "the conterminous pro- vinces" which may happen to "demand by votes freely expressed,"—and as freely paid for,—" their annexation to France." "The conterminous provinces 1" Is it the whole Rhine on which he has fixed his eyes, or only the German section, or only Belgium? It is a large expression when used by a Napoleon at the head of 600,000 men, and may remodel the map even more effectually than the original quarrel. That reassuring sentence rightly read, might even now, were it not so late, induce Germany to reconsider the wisdom of waging a civil war. So complete is the Emperor's conscious- ness of virtuous strength, so convinced is he that the war must leave him master of the situation, that he even ventures to hope the grand prize may be peacefully obtained, that the "moral force" of France, i. e., the fear of her bayonets, may be as effective as her physical force, that is, their exercise. He will not, he tells the Powers, with a reassuring smile, intervene in their duel, but after the combat comes Congress, and then— with a side glance at his own people, so apt to fret in inaction- " none of the questions which touch us shall be resolved with- out the assent of France." All is peace and disinterestedness, provided we have our way. Stay, there are two other points on which France has actual "interests," things for which she will fight, and which may be affected in the struggle. The "equilibrium of Europe must not be disturbed,' that is, we take it, Prussia must not win so completely as to unite all Germany under her sway ; and "that which we have con- tributed to establish in Italy must be maintained," that is, Austria must not win so completely as to re-establish her power in the Italian Peninsula. Those are the limits fixed by the supreme voice of Europe, but within them the Powers may ruin each freely, and Napoleon, when the ruin is con- summated, will only see that such "conterminous provinces" as may desire to be annexed to France,—as Nice and Savoy were supposed to do,—shall be gratified in their desire. It is possible that " dieinterested " declaration may be reassuring to Kaiser and King, but it is not calculated to be very reas- suring to England, which runs some risk of seeing a Congress for the redistribution of Europe assembled without her pre- sence, and without an inclination to pay any attention to her wishes or interests. France is extremely " moderate " as to avoiding alliances, or any visible share in the war, but she may not be quite so moderate in demanding her share in the profits of peace.

The Emperor's letter adds distinctly to the magnitude of issues which seem to grow daily greater. Italy adheres to her original demand for Venetia as it stands; but Prussia, scorning to put forward the Duchies as the ground of quarrel, now demands a reconstruction of the Bund, with Austria expelled from its limits, with herself, that is, alone and supreme among a world of little States. She is to control German policy, and the German fleet, and the German army, though the command-in-chief may be shared with Bavaria, under an arrangement evidently not intended to endure. The Princes may continue to live as Lord-Lieutenants, in a monarchy one- and indivisible, hilt all substantial political power will pass to- the Emperor-King of Germany and Prussia. This is the very contingency which the Emperor Napoleon in his manifesto considers so grave—the disturbance of the equilibrium of for the benefit of a single Power. On the- other hand, all accounts from Vienna concur in the. statement that the war in the South is regarded as of minor importance, that Kaiser and people are resolved to punish the "insolent audacity" of the rival House. Prus- sia is to be crushed and compensation for Venetia found in a great accession of strictly German territory—an object which Prussia will resist almost to the death. Her dynasty will not surrender the province won by so many years of battle and suffering, nor will her people consent to be regarded once more as citizens of a second-rate State. As the Courts get excited the issues widen, till the masses begin to perceive that they are vital, and we seem once more on the threshold of a war in which the combatants will be nations as well as armies, in which the prosperity of whole countries, the bone- and sinew of entire populations, may be engulfed. The letter of the Emperor, the movements of Russian armies, all remind Europe ominously of the existence of Powers still in the background, who, when the original battle is finished, may step forward to the front indefinitely to prolong the strife. It is too late now to pause. The vote of the Diet ordering Federal execution in Prussia, the Prussian demand that Austria shall be expelled from Germany, the expulsion of Austrian troops from Holstein, the extraordinary language of Count von Bismarck, in despatches as well as speeches, language- almost unprecedented in the intercourse of modern Europe, and dictated apparently by a desire to prove that the hour for courtesy is past, all converge to make war a question of hours. Whatever the consequences, whatever the magnitude. of the stake, no power can now recede without a sense of deep. dishonour, of yielding rights repeatedly asserted to a menace- of force. A Parliament might -do it, for it would be able to, make a free people understand its magnanimity, but the head of a military monarchy cannot succumb without a blow to military force. The Sovereigns have advanced so far that they have to choose between revolution and war, and in Prus- sia and Italy at all events there can be no doubt of their choice. No blood has yet been shed, but already disease has broken out in the armies, and while the Prussians are reported to send one per cent. per diem into hospital, deserters describe. typhus as raging in the Austrian Army of the North, and the Italians are beginning to feel the influence of the marshes along the Po. It is with the cholera on its march westward, Russian armies hovering on its northern frontier, a Napoleon watching grimly with an unbroken army to coerce alike victor and vanquished, disease in the tents, famine in the plains, and women crying for bread in the cities, that Germany commences the campaign of expiation for its long oppression in Italy and its brief but ruinous raid on Denmark.