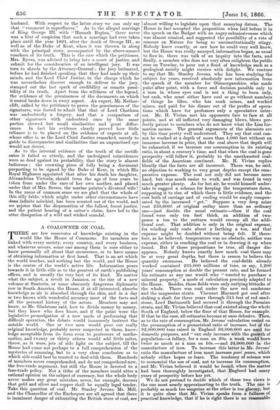 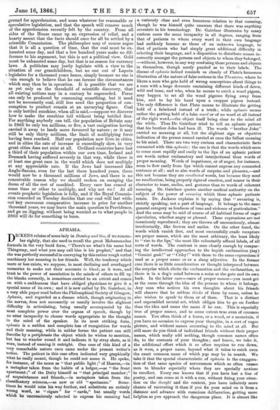 We do not pretend to decide which of these two views is the one most nearly approximating to the truth. The one is probably as much too sanguine as the other is too gloomy, but it is quite clear that Mr. Vivian speaks from a fullness of practical knowledge, that if he is right there is no reasonable

ground for apprehension, and none whatever for reasonable or speculative legislation, and that the speech will remove much of the apprehension recently felt by the country. From all sides of the House came up an expression of relief, and a hearty assent that the facts should once for all be settled by a scientific Commission. The philosopher may of course argue that it is all a question of time, that the coal must be ex- hausted some day, and that a few hundred years make no dif- ference to his argument, but this is not a political view. Gold must be exhausted some day, but that is no reason for currency laws. A politician may justly legislate with a view to the situation of our grandchildren, but no one out of Laputa Q. legislates for a thousand years hence, simply because no one is yarn enough to believe that he can foresee the circumstances which may then be in operation. It is possible that we are as yet only on the threshold of scientific discovery, that all existing notions may in a century be superseded. Force can only be produced by consuming something, but it need not be necessarily coal, still less need the proportion of con- sumption to product remain at an unvarying figure. Coal is only bottled sunshine, when all is said,—suppose we discover how to make the sunshine toil without being bottled first. For anything anybody can tell, the population of Britain may in 2866 be only ten millions, or five, a vast emigration having carried it away to lands more favoured by nature ; or it may still be only thirty millions, the limit of multiplying force having been reached. Half our population now lives in cities, and in cities the rate of increase is exceedingly slow, in very great cities does not exist at all. Civilized countries have lost a third of their population within our own time, Ireland and Denmark having suffered severely in that way, while there is at least one great race in the world which does not multiply at any appreciable rate. If the Jews had increased like Anglo-Saxons, even for the last three hundred years, there would now be a thousand millions of Jews, and there is no conceivable reason why we should reckon on escaping the doom of all the rest of mankind. Every race has ceased at some time or other to multiply, and why not we ? At all events prophetic legislation is folly, and if the Royal Commis- sion conceded on Tuesday decides that our coal will last with- outiinl enormous comparative increase in price for another thousand years, we may leave the main question to Providence, and go on digging, without being worried as to what people in 2866 will-do for something to burn.