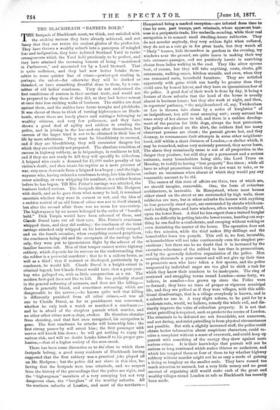 footpads of Blackheath must, we think, rest satisfied with Tithe striking success they have already achieved, and not fancy that they can revive the ancient glories of the profession. They have thrown a wealthy suburb into a paroxysm of mingled fear and indignation, they have induced Scotland Yard to revise arrangements which the Yard held previously to be perfect, and they have attained the crowning honour of being "mentioned in Parliament," and accounted for by a Lord Steward. That is quite sufficient, and they had now better betake them- selves to some quieter line of crime—pewter-pot stealing is, perhaps, the safest—for otherwise they will be ducked or thrashed, or have something dreadful done to them, by a com- mittee of old ladies' coachmen. They do not understand the first conditions of success in their ancient trade, and would not be prepared to obey them if they did, so they had better retreat at once into less exciting walks of business. The stables are dead against them, and the stables have horse-troughs and pitchforks. It was clever of them to think of turning highwaymen on Black- heath, where there are lonely places and carriages belonging to wealthy citizens, and very few policemen, and they have shown a good deal of agility and address in evading the police, and in joining in the hue-and-cry after themselves, but success of the larger kind is not to be obtained in their line of life by mere adroitness. They must be bloodthirsty to succeed, and if they are bloodthirsty, they will encounter dangers for which they are evidently not prepared. The absolute condition of success in highway robbery, as in brigandage, is readiness to kill, and if they are not ready to kill they will speedily be ridiculous. A brigand who sends a demand for /1,000 under penalty of his victim's death, and then treats his captive as a mere prisoner of war, very soon descends from a brigand to a bogey ; and the high- wayman who, having ordered a coachman to stop, lets him drive on never minding, or even whipping his assailant, is a robber beaten before he has begun. Till Mrs. Potter's carriage was attacked, the business looked serious. The footpads threatened Mr. Hodgson with death, and as he gave them what money he had, it remained uncertain whether they were in earnest or not, and the idea of a sudden revival of an old form of crime was not in itself absurd, but after the second affair there was no room for uncertainty. The highwaymen by no means belonged to the order of "bandits bold." Dick Turpin would have been ashamed of them, and Claude Duval have cut off their ears. Mrs. Potter's coachman whipped them, and they did nothing ; the coachman of the third carriage attacked only whipped on his horses and easily escaped ; and on the fourth occasion, when everything seemed propitious, the coachmen being old and the occupants of the carriage ladies only, they were put to ignominious flight by the advent of the familiar hansom cab. Men of that temper cannot revive highway robbery, which depends for its success on the understanding that the robber is a potential murderer ; that he is a callous brute, as well as a thief ; that if resisted or disobeyed, particularly by a coachman, he would kill. Claude Daval is a knight-errant in criminal legend, but Claude Duval would have shot a poor post- boy who galloped on, with as little compunction as a rat. The modern foot-pad does not like to kill. He has probably shared in the general softening of manners, and does not like killing,— there is generally blood, and sometimes screaming, which are disagreeable to the nerves ;—he knows quite well that killing is differently punished from all other crimes,—it was all one to Claude Duval, as far as punishment was concerned, whether he only took a watch or murdered a coachman ;- and he is afraid of the sleepless pursuit which murder, and no other other crime now-a-days, evokes. He therefore abstains from shooting, and that fact once recognised, his occupation is gone. The first coachman be attacks will horsewhip him ; the first strong passer-by will arrest him ; the first passenger with nerves will knock him down ; he will get nothing to repay his serious risk, and will no doubt betake himself to his proper pro- fession,—that of a higher variety of the area-sneak.

There has been some discussion as to the. class to which these footpads belong, a good many residents of Blackheath having suggested that the first robbery was a practical joke played off on Mr. Hodgson ; but the police did not share in this idea, be- lieving that the footpads were true criminals, and we suspect from the history of the proceedings that the police are right, and the "highwaymen" members of a very annoying but not very dangerous class, the " burglars " of the wealthy suburbs. All the southern suburbs of London, and most of the northern—

Hampstead being a marked exception—are infested from time to time by men, part tramps, part criminals, whose apparent busi- ness is a peripatetic trade, like umbrella-mending, while their real occupation is to commit small dwelling-house robberies. They do not murder anybody, they very seldom fight when collared, they do not as a rule go in for great hauls, but they watch all " likely " houses, hide themselves in gardens in the evening, try windows near the ground, are quite brave in making their way into entrance-passages, and are positively heroic in snatching chains from ladies walking in the cool. They like silver spoons best, of course, but they will take anything, coats, clocks, gilt ornaments, walking-canes, kitchen utensils, and even, when they can command carts, household furniture. They are satisfied apparently with gains which can hardly be greater than they could earn by honest labour, and they have an ignominious fear of the police. A good deal of their work is done by day, it being a feature of these suburbs that the head of the house is usually absent in business hours ; but they also work at night, and then, in reporters' parlance, "the neighbourhood of, say, Twickenham or Lee is thrown into alarm by a series of burglaries" of an insignificant, but still most annoying sort ; every servant has some story of her alarms to tell, and there is a sudden develop- ment of the passion for little dogs, always the best protectors. The police are placed on the alert, the robbers find too many observant persons are about ; the pursuit grows hot, and they decamp, to recommence their attempts in some other neighbour- hood, still within a short distance of London,—a shelter which, it may be remarked, unless very seriously pursued, they never leave. The alarm they occasionally cause is out of all proportion to the danger they produce, but still they are a permanent and a serious nuisance, many householders being able, like Lord Truro on Monday, to testify to having "lost property" five times ; while all have to adopt precautions which they do not want to take, or to endure an uneasiness when absent of which they would pay any reasonable amount to be rid.

The causes of this state of affairs are three, two of which are, we should imagine, removable. One, the form of suburban architecture, is incurable. In Hampstead, where most houses either stand on the street or are surrounded by high walls, these robberies are rare, but in other suburbs the houses with anything to lose generally stand apart, are surrounded by shrubs which con- ceal a lurking figure, and have windows, often wretchedly secured, upon the lower floor. A thief far less expert than a trained burglar finds no difficulty in getting into the lower rooms, handing out any- thing he can find to a confederate, and escaping without waking or even disturbing the master of the house. The operation does not take five minutes, while the thief makes fifty shillings and the householder loses ten pounds. This evil is, we fear, incurable, as householders will not take continuously even the simplest pre- cautions ; but there can be no doubt that it is increased by the excessive reluctance of the robbed to lose time in prosecutions, and by the generally defective organisation of the police. Men earning thousands a year cannot and will not give up their time to prosecute men who have taken a few spoons, and the police unspurred by individual anger are too glad to shirk a task for which they know their numbers to be inadequate. The ring of scattered and straggling towns round London—some forty, we believe, in number—has grown up since the Police were re-formed ; they have no trace of proper or vigorous municipal life, and they are policed as if they were villages, with this addi- tional disadvantage, that in a village everybody is known, and in a suburb no one is. A very slight reform, to be paid for by a moderate rate, would, we believe, remedy the whole evil, and dis- tinctly improve the value of suburban property. It is not that strict patrolling is required, such as protects the centre of London. The criminals to be defeated are not formidable, not numerous, and not daring, and strict patrolling is from physical circumstances not possible. But with a slightly increased staff, the police could obtain better information about suspicious characters, could re- ceive a complaint without a sense of overwork, and could keep up pursuit with something of the energy they show against more serious crimes. It is their knowledge that pursuit will not be serious or long continued which makes thieves so audacious, and which has tempted three or four of them to try whether highway robbery without murder might not be as easy a mode of gaining a living as burglary on the smaller scale. They have roused too much attention to succeed, but a very little money and no great amount of organising skill would make each of the great and wealthy villages round London as safe as Blackheath has recently been made.