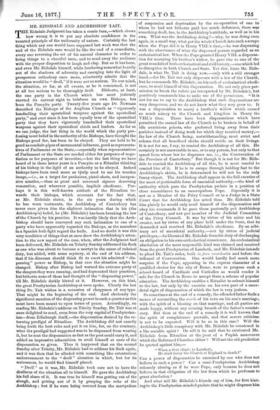 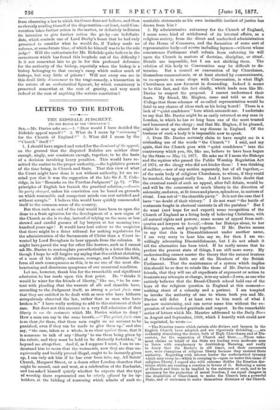 THE Ridsdale Judgment has taken a comic turn,—which shows how wrong it is to put any absolute confidence in the vaunted principle of the uniformity of nature. Certainly the last thing which any one would have supposed last week was that the end of the Ridsdale case would be like the end of a comedietta, every one reversing the set of his natural character in order to bring things to a cheerful issue, and to send away the audience with the proper disposition to laugh and clap. But so it has been, and even Mr. Ridsdale himself, while lumbering somewhat heavily out of the shadows of adversity and emerging into the light of prosperous orthodoxy once more, reluctantly admits that the situation would be" droll," if it were not so serious. To our mind, the situation, so far, at all events, as he is concerned, is not

at all too serious to be thoroughly droll. Hitherto, at least, the one party in the Church which has most jealously exerted its natural right to belabour its own Bishops, has been the Puseyite party. Twenty-five years ago Dr. Newman described the Bishops of the Anglican Church as "vigorously handselling their apostolical weapons against the apostolical party," and ever since it has been equally true of the apostolical party that they have vigorously handselled their apostolical weapons against their apostolical chiefs and leaders. As far as we can judge, the last thing in the world which the party pro- fessing most belief in the authority of the Bishops, have thought the Bishops good for, has been to be obeyed. They are held to be good as conduit-pipes of sacramental influence, good as representa- tives of Parliament or the State,—especially when representatives of Parliament or the State are needed either for purposes of nego- tiation or for purposes of invective,—but the last thing we have heard of in these latter years is a Puseyite or a Ritualist thinking of his bishop in the light of an authority to be obeyed. Indeed bishops have been used more as Quilp used to use his wooden image,—i.e., as a target for penknives, pistol-shots, and inexpen- sive missiles,—than as great and reverend signors deserving veneration, and wherever possible, implicit obedience. Per- haps it is this well-known attitude of the Ritualists to- wards their bishops, which accounts for the fact that, as Mr. Ridsdale states, in the six years during which he has worn vestments, the Archbishop of Canterbury has never once given him the slightest intimation that in his (the Archbishop's) belief, he (Mr. Ridsdale) has been breaking the law of the Church by his practice. It was hardly likely that the Arch- bishop should have conveyed any such intimation to one of a party who have apparently regarded the Bishops, as the matadors ins Spanish bull-fight regard the bulls. And no doubt it was this very condition of things that at once drew the Archbishop's atten- tion to the new aspect of the case, when, after the Judgment had been delivered, Mr. Ridsdale on Trinity Sunday addressed his flock as one who was about to become a martyr in the cause of rubrical duty, but added, with some mystery, at the end of his address, that if his diocesan should think fit to exert his admitted "dis- pensing" power as Bishop, in that case the situation might be changed. Bishop after Bishop had warned the extreme party of the dangers they were running, and had deprecated their practices, but hitherto none of them had thought of the "dispensing power," till Mr. Ridsdale darkly hinted at it. However, on this hint, the great Presbyterian Archbishop at once spoke. Clearly the last thing Dr. Tait wishes is a secession of clergymen of any type. That might be the beginning of the end. And obviously the significant mention of the dispensing power in such a quarter as this must have been meant to open terms of peace. Accordingly, on reading Mr. Ridsdale's address on Trinity Sunday, Dr. Tait was at once delighted to send, even from the very capital of Presbyterian- ism—from Edinburgh itself,—the dispensation desired by the re- turning prodigal of Ritualism. The Archbishop did not exactly bring forth the best robe and put it on him, for, on the contrary, what the prodigal had suggested was to be dispensed from wearing it, but he sent the dispensation as fast as the post could carry it, and added an impressive admonition to avail himself at once of the dispensation so given. Thus it happened that on the second Sunday after Trinity, Mr. Ridsdale had to address his flock again, and it was then that he alluded with something like ostentatious embarrassment to the " droll " situation in which, but for its seriousness, he would find himself placed.

" Droll " as it was, Mr. Ridsdale took care not to have the drollness of the situation all to himself. He gave the Archbishop his full share of it. It was true he himself was getting out of the slough, and getting out of it by grasping the robe of the Archbishop ; but if he were being rescued from the martyrdom

of suspension and deprivation by the co-operation of one to whom he had not hitherto paid too much deference, there was something droll, too, in the Archbishop's attitude, as well as in his own. What was the Archbishop doing ?—why, he was doing once again, in a small way, what got the whole Church into such a scrape when the Pope did it in Henry VIll.'s time,—he was dispensing with the observance of what the dispensed person regarded as an ecclesiastical law. When the Pope granted Henry VIII. a dispensa- tion for marrying his brother's widow, he gave rise to one of the great scandals of both ecclesiastical and civil history,—one which led to disruption in both Church and State. Yet this, hints Mr. Rids- dale, is what Dr. Tait is doing now,—only with a still stronger hand,—for Dr. Tait not only dispenses with a law of the Church, but he commands Mr. Ridsdale, on his oath of ecclesiastical obedi- ence, to avail himself of this dispensation. He not only gives per- mission to break the rubric (as interpreted by Mr. Ridsdale), but positively commands him to make use of the permission. "It is not for me to say to the Archbishop that such dispensations are very dangerous, and we do not know what they may grow to. It was a dispensation to marry a brother's widow which caused so much misery to the Church and kingdom in Henry the VIII.'s time. There have been dispensations which have permitted the sacred law of the Church to be broken in behalf of idle avaricious priests, who preferred living away from their parishes instead of doing work for which they received money,— the law of the Church being, notwithstanding, most strict and solemn that all beneficed clerks should reside on their livings. It is not for me, I say, to remind the Archbishop of all this. He certainly is not answerable to me, or to any person, but only to that synod from whose law he dispenses me, i.e., the Convocation of the Province of Canterbury." But though it is not for Mr. Rids- dale to remind the Archbishop of all this, he is most careful to remind him of it. If he is to escape through holding fast to the Archbishop's skirts, he is determined he will not be the only funny object. The Archbishop shall appear in the full exercise of the most objectionable form of canonical authority,—the kind of authority which puts the Presbyterian prelate in a position of close resemblance to an unscrupulous Pope. Especially it is not as a Member of the Privy Council or as a Judge in a State Court that the Archbishop has acted thus. Mr. Ridsdale told him plainly he would only avail himself of the dispensation and obey his commands if he gave them pastorally qua Archbishop of Canterbury, and not qua member of the Judicial Committee of the Privy Council. It was by virtue of his mitre and his crozier, not by virtue of any place held under the State, that he demanded and received Mr. Ridsdale's obedience. By an arbi- trary act of sacerdotal authority,—not by virtue of judicial privileges,—he liberated Mr. Ridsdale from his duty of discharging an obligation to his own ecclesiastical conscience. An ecclesiastical absolution of the most responsible kind was claimed and received from the great Presbyterian of Lambeth, and Mr. Ridsdale intends to plead Dr. Tait's order, both in foro conscientim and before the tribunal of Convocation. One would hardly feel much more surprise if the Pope, appearing in the express character of a qualified elector for the city of Rome, were to propose such a school-board of Cardinals and Catholics as would render it safe for the Church in Rome to accept there a scheme of popular education. The Archbishop enables a Ritualist to submit himself to the law, but only by the exercise on his own part of a sacer- dotal right of dispensation of which the law is very jealous.

So sometimes at the end of a comedy, the offended father finds a means of reconciling the words of his veto on his son's marriage, with the spirit of a blessing on that marriage, and all parties are made happy, without any seeming breach of the father's consist- ency. But then at the end of a comedy it is well known that the spirit of complaisance prevails, and that severe criticism is not to be expected. Will it be so in this case? Will the Archbishop's little conspiracy with Mr. Ridsdale be construed in a like amiable spirit? Or will it be said that he extricated Mr. Ridsdale from Ritualism at the ',cost of a Popish manceuvre which the Reformed Churches abhor ? Will not the old prediction be quoted against him,— " When a Scot climbs to Lambeth,

Ho shall harry the Church of England to death ?"

Can a power of dispensation be exercised by one who does not believe in such a power? Can a semi-Presbyterian Archbishop solemnly absolvs as if he were Pope, only because he does not believe in that obligation of the law from which he professes to grant absolution ?

And what will Mr. Ridsdale's friends say of him, for first hint- ing to the Presbyterian-minded prelate that he might dispense him from observing a law in which his Grace does not believe, and then so cleverly availing himself of the dispensation—at least, until Con- vocation takes further action in the matter, or definitely indicates its intention to give further action the go-by—an indefinite date, which reminds one of Lord Derby's boast that he had only promised to consider what he would do, if Turkey made no reforms, at some future time, of which he himself was to be the sole judge? Will the enthusiasts for Mr. Ridsdale quite believe in the earnestness which has found this loophole out of the difficulty? Is it not somewhat late to go in for this profound deference for the authority of the bishop, especially when the bishop is a bishop belonging to that enemy's camp which makes much of bishops, but very little of priests ? Will not every one see in this droll little denouement to the tragi-comedy, a transaction in the nature of an ecclesiastical figment, by which consistency is preserved somewhat at the cost of gravity, and very much indeed at the cost of anything like serious conviction?