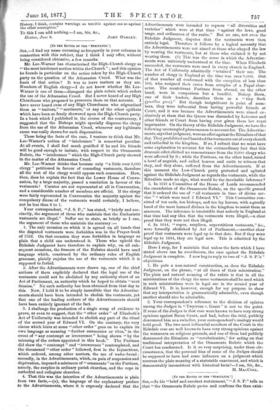 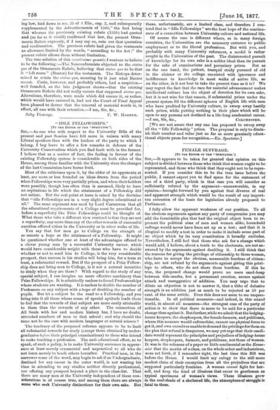 Si,—In his "brief and succinct restatement," " J. S. P." tells us that "the Ornaments Rubric quotes and confirms the then exist.. log law, laid down in sec. 25 of 1 EliZ., cap. 2, and subsequently supplemented by the Advertisements of 1566," the fact being that whereas the previously existing rubric (1559) had quoted and (so far as it could) confirmed that law, the present Orna- ments Rubric expressly, if I may say so, cuts out that quotation and confirmation. The previous rubric had given the vestments an allowance limited by the words, "according to the Act ;" the present rubric allows them without limitation.

The true solution of this rexatissima quiestio I venture to believe to be the following :—The Nonconformists objected to the status quo of the Ornaments Rubric, believing that status quo to be that it "left room" (Baxter) for the vestments. The Bishops deter- mined to retain the status quo, meaning by it just what Baxter meant. Cosin, however, and probably others, had a suspicion— well founded, as the late judgment shows—that the existing Ornaments Rubric did not really ensure that supposed status quo. Alterations, therefore, were made which did ensure it, or rather, which would have ensured it, had not the Court of Final Appeal been pleased to decree that the removal of material words is, in effect, all one with their retention.—I am, Sir, &e.,