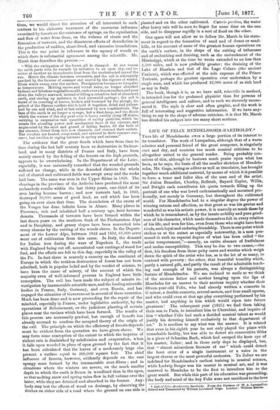 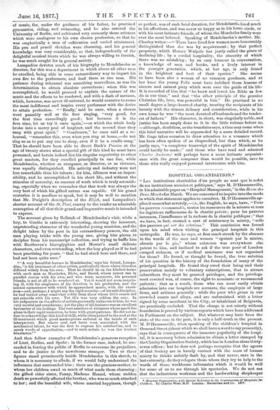 LIFE OF FELIX DIENDELSSOHN-BARTHOLDY.* Tuts life of Mendelssohn owes a

large portion of its interest to its translator. The work of Lampadius, although that of a warm admirer and personal friend of the great composer, is singularly curt and dry, and contains too much musical criticism to be altogether suited to the general reader. Being probably con- scious of this, although he bestows much praise upon what has been, as he says, the basis of all the smaller sketches of Mendels- Bohn, Mr. Gage, acting as editor as well as translator, has brought together much additional material, by means of which it is possible to form a truer and fuller idea of the man and of the artist Sir Julius Benedict, Chorley, Rellstab, Bayard Taylor, Willis, and Dwight each contributes his quota towards filling up the portrait of one who was loved enthusiastically and mourned pro- foundly, not merely in Germany, but throughout the cultivated world. For Mendelssohn had to a singular degree the power of winning esteem and affection, so that great as was his genius and wonderful as was his artistic power, it is scarcely so much these by which he is remembered, as by the innate nobility and pure good- ness of his character, which made themselves felt in every relation of his life, and won for him, even from those who might have been rivals, such loyal and enduring friendship. There is one point which strikes us at the outset as especially noteworthy, in a man pos- sewed in such an especial degree of what has been called "the artist temperament,"—namely, an entire absence of fretfulness and undue susceptibility. This may be due to two causes,—the first, his freedom from those petty cares and worries which weigh down the spirit of the artist who has, as is the lot of so many, to contend with poverty ; the other, that beautiful humility which, partly a natural gift, and partly the result of the admirable teach- ing and example of his parents, was always a distinguishing, feature of Mendelssohn. We are inclined to smile as we think of the anxious father and mother hanging upon the lips of Moscheles for an answer to their anxious inquiry whether their fifteen-year-old Felix, who had already written a concerto in G minor, a double concerto, several motets, and four small operas, and who could even at that age play everything performed by his master, had anything in him which would ripen into future greatness ! The subsequent year (1825) we find them taking their son to Paris, to introduce him to Cherubini, and inquire of him "whether Felix had such a decided musical talent as would justify his devoting himself exclusively to that department of art." It is needless to say what was the answer. It is related that even in his eighth year he not only played the piano with remarkable facility, but was able to detect six consecutive fifths in a piece of Sebastian Bach, which had escaped the keen eye of his master, Zeller; and in those early days he displayed, too, that "almost miraculous fineness of ear" which could detect the least error of a single instrument or a voice in the largest chorus or the most powerful orchestra. To Zelter we are indebted for Mendelssohn's earliest training in musical science, while Ludwig Berger was his master in musical art, and it was reserved to Moscheles to be the first to introduce him to the great world. But while this part of his education was proceeding, the body and mind of the boy Felix were not sacrificed to the love • Life of Felix ldendelssohn Bartholdy. From the German of W. A. Lampadius. Edited and Translated by William Leonhard Gage. London : William Reeves.

of music, for, under the guidance of his father, he practised gymnastics, riding, and swimming, and he also entered the University of Berlin, and cultivated very earnestly those sciences which Were analogous to his own chosen profession, so that he was emphatically a man of cultivation and varied attainment. His pen and pencil sketches were charming, and his general knowledge was very considerable, so that, independently of the delightful musical treats which he was always willing to furnish, he was much sought for in general society.

Lampadius devotes much of his biography to Mendelssohn as director, for this was a department in which above all other men he excelled, being able in some extraordinary way to impart his own fire to the performers, and lead them as one man. His patience during rehearsal was something marvellous, as was his determination to obtain absolute correctness ; when this was accomplished, he would proceed to explain the nature of the music and the effects to be rendered, and with a dash of sarcasm, which, however, was never ill-natured, he would contrive to rouse the most indifferent and inspire every performer with the desire to attain perfection. "'Really,' said he once, when a chorus went passably well at the first singing, 'very good, for the first time exceedingly good ; but because it is the first time, let us try it once again,'—on which the whole body broke into a merry peal of laughter, and the second time they sang with great spirit." "Gentlemen," he once said at a re- hearsal, "remember this, even when you sing at home,—do not sing so as to put any one to sleep, even if it be a cradle-song." That he should have been able to direct Bach's Passion at the age of twenty shows what a special gift of this kind he must have possessed, and herein indeed lies his singular superiority to other great masters, for they excelled principally in one line, while Mendelssohn, whether as composer, as director, or as virtuoso, was equally distinguished. His activity and industry were not less remarkable than his talents ; for him, idleness was an impos- sibility, and he accomplished in his short life, and without the stimulus of necessity, an amount of work which is truly astonish- ing, especially when we remember that that work was always the very best of which his gifted nature was capable. Of his grand oratorios it is needless to speak, but it may be well to mention that Mr. Dwight's description of the Elijah, and Lampadius's shorter account of the St. Paul, convey to the reader an admirable • conception of all that their grand and impressive music is intended to express.

The account given by Rellstab of Mendelssohn's visit, while a boy, to Goethe is extremely interesting, showing the innocent, unpretending character of the wonderful young musician, and the delight taken by the poet in his extraordinary powers, the old man playing tricks with the young one, giving him pieces to decipher from his manuscript collection, and trying to baffle him with Beethoven's hieroglyphics and Mozart's small delicate characters, and even contending, when the boy played as if he had been practising for years, "that he had stuck here and there, and had not been quite sure."

"'A very beautiful feature in Mendelssohn,' says his friend, Lamps- dins, 'is his treatment of other artists, particularly those whose direction differed widely from his own. That he should be on the kindest terms with such men as Moscheles, Rietz, and David, whose career ran in parallel course with his own, and who were, moreover, his personal friends, is not at all to be wondered at. Yet it would not seem surpris- ing if, with the singleness of his devotion to his profession, and the intense earnestness with which he approached music' with tho exact- ness—and, perhaps, I might say the rigid severity—of his self-discipline, he had turned away somewhat coldly from those whose life's course did not coincide with his own. Yet this was very seldom the case. In his judgments on the efforts of artists personally unknown to him, he was very careful and considerate ; yet the play of his features was an excellent barometer of his feelings. The vast numbers of virtuosos whose merit lies alone in their rapid execution, he bore with great patience. He did not re- fuse to acknowledge this kind of skill, while often pained to the soul at the ill-treatment which great masterpieces suffered at the hands of such interpreters. But where soul and taste were associated with the mechanical talent, he was the first to express his satisfaction, and to speak words of approbation,—and to such artists he was the kindest benefactor."

And then follow examples of Mendelssohn's generous reception of Liszt, Berlioz, and Spohr ; in the former case, indeed, he suc- ceeded in forcing the public of Berlin to overcome its prejudices, and to do justice to the unwelcome stranger. Two or three figures stand prominently beside Mendelssohn in this sketch, to whom it is necessary to allude, if we would fully understand the influences that surrounded him ; these are the gracious mother, to whom her children owed so much of what made them charming ; the gifted elder sister, Fanny, Madame Hensel, whose sudden death so powerfully affected the brother, who was so much attached to her ; and the beautiful wife, whose married happiness, though so perfect, was of such brief duration, for Mendelssoha lived much in his affections, and was never so happy as in his horns. circle, or with his most intimate friends, of whom the Moscheles family were ever the most beloved. Speaking of lilendelssohn's mothet, Mr. Chorley writes :—" There have lived few women more honourably distinguished than she was by acquirement ; by that perfect propriety, which Horace Walpole has justly called the grace of declining life ; by a cordial hospitality, the sincerity of which there was no mistaking ; by an easy humour in conversation, a knowledge of men and books, and a lively interest in the younger generation, which, at her age, is only found in the brightest and best of their species." She seems to have been also a woman of no common goodness, and at her knee the young Felix must have imbibed those lessons of sincere and earnest piety which were ever the guide of his life. It is recorded of him that "he knew and loved his Bible as few do in our time," and that "the other principle of the genuine Christian life, love, was powerful in him." He practised in no small degree a large-hearted charity, treating the recipients of his bounty with the utmost delicacy and consideration, while in his own home he was "the most devoted of husbands and the tender-. eat of fathers." His character, in short, was singularly noble, and justice has been amply done to it in the little volume before us, —although, doubtless, as the translatorsays, a time may come when this brief narrative will be superseded by a more detailed record. Mr. Gage takes occasion to draw attention to a romance which has been often spoken of as rhapsodical, but than which, as he justly says, "a completer transcript of the spirit of Mendelssohn could hardly be made;" and those who have read and admired Charles Anehester will perhaps have a more intimate acquaint- ance with the great composer than would be possible, save to those who really enjoyed personal intercourse with him.