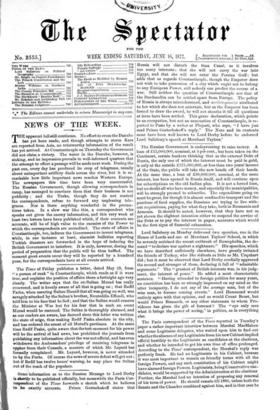 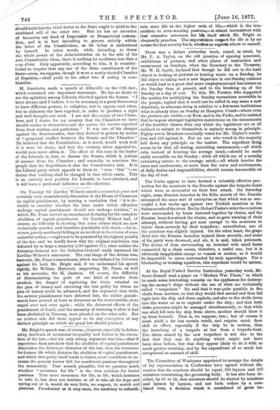 Page 1, 16 June 1877 — The Paris correspondent of the Times reported in Tuesday's paper
Close

The Paris correspondent of the Times reported in Tuesday's paper

a rather important interview between Marshal MacMahon and some Legitimist delegates, who waited upon him to find out whethertheabsenceof any Legitimista from his new Cabinet implied official hostility to the Legitimists as candidates at the elections, and whether he intended to get his own time of office prolonged. According to the Times' correspondent, the Marshal's reply was perfectly frank. He had no Legitimists in his Cabinet, because it was most important to remain on friendly terms with all the foreign Powers, and any such constitution of his Cabinet might have alarmed foreign Powers. Legitimists, being Conservative can- didates, would be supported by the Administration at the elections Further, the Marshal had no intention of proposing any renewal of his term of power. He should remain till 1880, unless both the Senate and the Chamber combined against him, and in that case he should hold that the third factor in the State ought to yield to the combined will of the other two. But he has no intention of favouring any kind of Imperialist or Monarchical restora- tion, and is in fact intending to govern strictly within the letter of the Constitution, as its letter is understood by himself. In other words, while intending to throw the whole power of the Administration on to the side of his own Conservative ideas, there is nothing he meditates less than a coup d'itat. Only apparently, according to him, it is constitu- tional to require that any one of the three constituents of the State—even, we suppose, though it were a newly elected Chamber of Deputies,—shall yield to the other two if acting in com- bination.