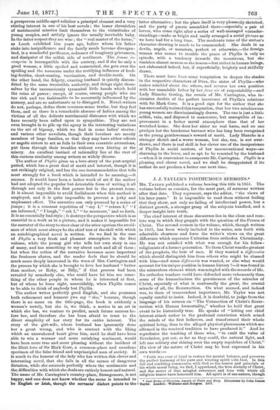 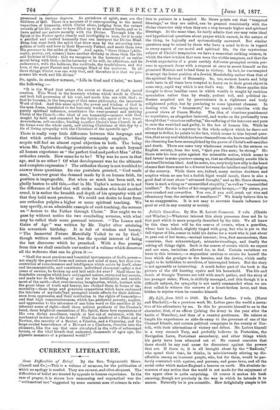 MR. TarLEn published a volume bearing this title in 1851. The volume before us consists, for the most part, of sermons written after that date. They represent, says the editor, "the views of his later years." It is impossible to read them without feeling that they show, not only no failing of intellectual power, but a distinct growth, a stronger grasp of the subjects handled, and a

The chief interest of these discourses lies in the close and reso- lute way in which they grapple with the question of the Person of Christ. The second sermon in the volume, which, though written in 1843, has been wisely included in the series, sets forth with admirable clearness and force the writer's views on the great difference which separates Unitarian from orthodox Christianity He was not satisfied with what was enough for his fellow- religionists of a former generation. To them Christ wasthe greatest of the prophets, the best of men. If they wanted a differentia which should distinguish him from others who might be classed with him—and some differentia was wanted, or else what would account for his unique position in human history 7—it was found in the miraculous element which was mingled with the records of life..

No orthodox teachers could have defended more vehemently than, some of the humanitarians the genuineness of the miracles of Christ, especially of what is confessedly the great, the crude} miracle of all, the Resurrection. On what seemed, and indeed was, to them of transcendent importance, Mr. Tayler was not equally careful to insist. Indeed, it is doubtful, to judge from the- language of his sermon on "The Connection of Christ's Resur- rection with Human Immortality," whether he held that great event to be historically true. He speaks of "letting our chief interest attach rather to the profound conviction which seized the minds of the first believers, and transformed their whole- spiritual being, than to the alleged physical phenomena which are affirmed in the received tradition to have produced it." And he reprobates the teaching of those who, "to exalt the value of Revelation, put out, as far as they could, the natural light, and left one solitary star shining over the empty sepulchre of Christ.' His view of the nature of Christ may be best expressed in his own words :—

"Faith was ever at hand to restore the mental balance, and preserve- the perfect harmony of his pure and trusting spirit with God. In this full and confiding communion with God as the source and principle of his whole moral being, we find, I apprehend, the true divinity of Christ,. and the secret of that mingled reverence and love with which all religious hearts have honoured him. All spirit is of one nature, though • Last series of C5ristian Aspects of Faith and Duty. Discourses by John Junes Tagler. London: Williams and Norgate. 1877. possessed in arious degrees. As partakers of spirit, men are the children of 1316d. There is a measure of it corresponding to the moral capacities of humanity, which Christ alone, judging from the extant records et his life, seems to have filled up to its utmost limits, and so to have milted our nature morally with the Divine. Through him the -Spirit of tbe Father spoke clearly and intelligibly to men, for it is only a purified and exalted humanity that can interpret the Divine Mind. From him went forth the spirit that drew men by the attracting sym- pathies of faith and love to their Heavenly Father, and made them own His presence in the midst of them." And again, "these things [philo- sophy, poetry, art, science] have another divinity in them than the life and doctrine of Christ : that we recognise in the harmony of an entire moral being with God,—in the harmony of its will, its affections, and its endeavours, with the holiness, the rectitude, the truthfulness, and the love, of the great Parent and Sovereign Mind of the universe. In all these things, Christ was one with God, and therefore it is that we pro- nounce his work and life divine."

So, again, in another sermon, "Life in God and Christ," we have the following :—

" It is the Word that utters the secret or theory of God's moral creation. This Word is the heavenly wisdom which dwelt in Christ, and took full possession of his soul, and made him one with God ; so that he became, in the language of that same philosophy, the incarnate Word of God. And this same spirit, the power and wisdom of God in the man Jesus, translated to the heavenly world, and becoming there a purely spiritual influence, constitutes the ever-present and undying Christ of the Church—the ideal of our humanity—oneness with God, sought by faith and cemented by the Spirit—the spirit of love, trust, devotedness, self-sacrifice, binding together Christ's true Church in all its forms over the whole earth, and uniting Christians of this day by a tie of living sympathy with the Christians of the apostolic age."

There is really very little difference between this language and that which orthodox Christianity commonly employs. The sceptic will feel an almost equal objection to both. The being whom Mr. Taylor's theology postulates is quite as much beyond all human experience as "the perfect God and perfect Man" of the orthodox creeds. How came he to be? Why was he seen in that age, and in no other ? Of what development was he the ultimate and complete expression ? The orthodox theory is not troubled to answer these questions. Its one postulate granted, "God made man," however great the demand made by it on human faith, its position is impregnable. But when so much has been said, we gladly hasten to add this,—that in Mr. Tayler's sermons it is not the difference of belief that will strike readers who hold another creed, it is rather the breadth and depth of his sympathy with all that they hold most precious. We could not desire to hear from our orthodox pulpits a higher or more spiritual teaching. We may specify, as an admirable example of such teaching, the sermon on "Access to the Father through Christ." Nor ought we to pans by without notice the two concluding sermons, with what may be called their more personal interest. "The Losses and Gains of Age" was written by Mr. Taylor after attaining his seventieth birthday. It is full of wisdom and beauty. "The Immortal Future Mercifully Veiled to us by God," though written much earlier, has the special interest of being the last discourse which he preached. With a fine passage from this we shall conclude our notice of a volume which deserves all the welcome that can be given it :—

"Shall the most precious and beautiful instruments of God's power— not simply the general form and nature and mind of man, but that con- centration of consciousness and intelligence which exists by itself, alone and incommunicable, and constitutes individual character—after a few years of service, be broken up and laid aside for ever ? Shall those in- domitable energies which have subjugated nature, extracted her secrets, and made her do the bidding of men for the fertilisation and enrich- ment of the earth—that ever-teeming imagination, which, instinct with the great ideas of truth and beauty, has clothed them in forms of im- mortality—those large and generous sympathies which have embraced the interests of myriads,7and prompted heroic efforts for their deliver- ance from oppression and their restitution to the rights of humanity— and that high conscientiousness, which has preferred poverty, neglect, and oppression to the utterance of one false word or the sacrifice of its inherent sense of right—shall these noblest products of the Creator's hand, these brightest emanations of His Spirit, these best expressions of His own divine excellence, vanish at last out of existence, with the mechanical instincts of the brute ? Shall the intellect of a Plato and a Newton, the sanctity of a Baxter, a Fenelon, and a Charming, and the large-souled benevolence of a Howard or a Clarkson, clissolve into the elements, like the sap that once circulated in the cells of submerged forests, or the vital breath that animated, thousands of ages ago, the gigantic monsters of a primeval world ?"