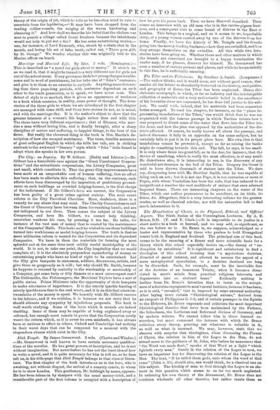 The City : an Inquiry. By W. Gilbert. (Daidy and

Isbister.)—Mr. Gilbert has a formidable case against the "Great Unreformed Corpora- tions" and the subordinate corporations, the Livery Companies, great and small, which constitute it. That the great City improvements have been made at an unspeakable cost of human suffering, that no effort has been made to alleviate this suffering ; that, on the contrary, such efforts have been discouraged by the imposition of prohibitory ground- rents on such buildings as crowded lodging-houses, is the first charge of the indictment. If Mr. Gilbert's facts are correct, the Corporation has been guilty of a great crime against society. The next count relates to the City Parochial Charities. Here, doubtless, there is a remedy for any abuse that may exist. The Charity Commissioners and the Court of Chancery have between them far-reaching hands, and are not indisposed to use them. Then comes the subject of the Livery Companies, and here Mr. Gilbert, we cannot help thinking, somewhat weakens his case, by pressing it too far. He talks, for instance of the vast sum of money that is wasted by the maintenance of the Companies' Halls. This looks as if he wished to see these buildings turned into workhouses or model lodging-houses. The truth is that no mere utilitarian reform is wanted for the Corporation and its dependent Companies. We have in them the materials for forming the most splendid and at the same time most solidly useful municipality of the world. It is not, to take one point, the City hospitality that we would complain of ; it is the absolutely purposeless squandering of money on entertaining people who have no kind of right to be entertained. Let the City give banquets to statesmen, soldiers, discoverers, artists, and give them as gorgeously as it will ; but why should Mr. Smith, because he happens to succeed by seniority to the wardenship or mastership of a Company, get some forty or fifty dinners at a most extravagant cost ? The Goldsmiths, the Fishmongers, the Merchant Taylors have a sort of public status. Prime Ministers take the opportunity of thoir banquets to make utterances of importance. It is the utterly ignoble feasting of utterly ignoble men that is the real waste, and it is on this that nineteen- twentieths of the money is spent. We heartily wish Mr. Gilbert success in his labours, and if we criticise, it is because we are sorry that he -should alienate any sympathy by injudicious proposals. The book is well worth studying. Some of the facts which it reveals are indeed startling. Some of them may be capable of being explained away or softened, but enough must remain to prove that the Corporation sorely wants the reform which, as if to cover its own misdeeds, it has always been so anxious to effect in others. Oxford and Cambridge had nothing in their worst days that can be compared for a moment with the stupendous abuses which exist in the City.