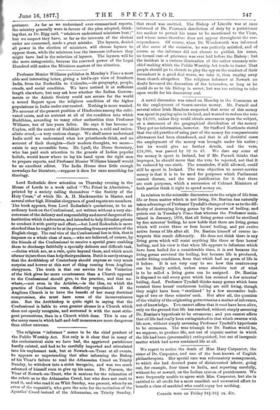 • The religious " informer " seems to be the

chief product of the Public Worship Act. Not only is it clear that in many of the ecclesiastical suits we have had, the aggrieved parishioner hardly existed, and had to be carefully imported and stimulated into his unpleasant task, but at Newark-on-Trent at all events, be appears so unpretending that after informing the Bishop of-his Vicar's failure to read the Athanasian Creed on Trinity Sunday, he withdrew into a strict incognito, and was too much ashamed of himself even to give up his name. Dr. Pearson, the Vicar of Newark-on-Trent, who is anxious for the relaxation of the rubric as to the Athanasian Creed, but who does not omit to read it, and who read it-on Whit Sunday, was present, when by an error of the organist's, who gave the note for the recitation of the Apostles' Creed instead of the Athanasian, on Trinity Sunday,

that creed was omitted. The Bishop of Lincoln was at once informed of Dr. Pearson's dereliction of duty by a parishioner too modest to permit his name to be mentioned to the Vicar, and whose name therefore does not appear throughout the cor- respondence. Of course, when Dr. Wordsworth was informed of the cause of the omission, he was perfectly satisfied, and of course as the informer did not choose to publish his name, no formal case of grievance was ever laid before the Bishop ; but the incident is a curious illustration of the rather unmanly mis- chief-making which the Public Worship Act tends to foster. That people should go to church to play the spy on the conduct of their incumbent is a good deal worse, we take it, than staying away from church altogether. The religious informer at Newark no doubt favoured the damnation of the heterodox, so long as he could do so to his Bishop in secret, but was too retiring to take open credit for his damnatory zeal.