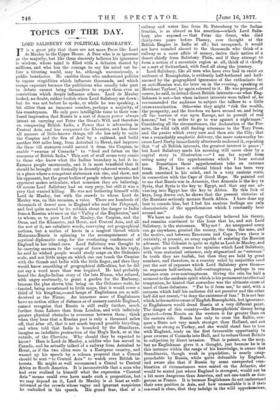 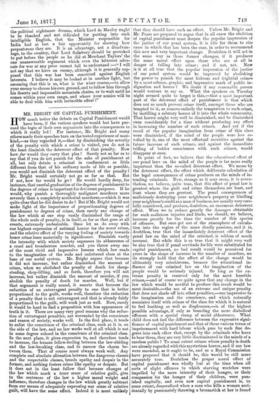 IT is a great pity that there are not more Peers like Lord de Manley in the Upper House. A Peer who is as ignorant as the majority, but like them sincerely believes his ignorance is wisdom, whose mind is filled with a delusion shared by millions, and who has the courage to say his mind out be- fore a tittering world, may be, although unconsciously, a public benefactor. He enables those who understand politics to expose stupidities which influence thousands, and which escape exposure because the politicians who usually take part in debate cannot bring themselves to repeat them even as convictions which deeply influence others. Lord de Mauley looked, no doubt, rather foolish when Lord Salisbury sat down ; but he was not before he spoke, or while he was speaking, a bit sillier than an immense number, perhaps a majority, of his countrymen. He only gave intelligible voice to their con- fused impression that Russia is a sort of demon power always intent on carrying out Peter the Great's Will, and therefore on conquering British India, a Power that is advancing in Central Asia, and has conquered the Khanates, and has done all manner of little-known things, till she has only to unite the Caspian and the Sea of Aral by a railroad, and build another 600 miles long, from Astrabad to Herat, and improve the Oxus till steamers could ascend it from the Caspian, to enable "swarms of Cossacks" to "feed and fatten on the resources of British India." This sort of stuff seems very comic to those who know what the Indian boundary is, but it in- fluences people enormously, and it is most beneficial that it should be brought out formally in decently coherent words, and in a place where a competent statesman can rise, and show, not his opponent, but the great bodies of people whose ignorance his opponent makes articulate, what nonsense they are believing. Of course Lord Salisbury had an easy prey, but still it was a prey that wanted killing. He was not bothering himself with Lord de Manley, but with the crowds to whom Lord de Manley was, on this occasion, a voice. There are hundreds of thousands of decent men in England who read the Telegraph, and feel quite moved by its rubbish about the danger to India from a Russian advance on the "Valley of the Euphrates," and to whom, as to poor Lord de Manley, the Caspian, and the Oxus, and the Khanates, and Herat, and Central Asia, and all the rest of it, are cabalistic words, conveying not geographical notions, but a notion of knots in a magical thread which Maimuna-Russia is spinning to the accompaniment of a mystical diplomatic song, for the everlasting confinement of England in her island cave. Lord Salisbury was thought to be carrying sarcasm to the verge of farce when, in his reply, he said he wished people would study maps on the Ordnance scale, and not little maps on which one can touch the Caspian with the thumb and India with the little finger, and then they would know something of geographical difficulties, but he did not say a word more than was required. He had probably heard the Anglo-Indian story of the late Nizam, who refused, with angry contumely, to grant a garden for the Embassy, because the plan shown him being on the Ordnance scale, he -fancied, being accustomed to little maps, that it would cover a third of his kingdom,—and heaps of Englishmen are as self- deceived as the Nizam. An immense mass of Englishmen have no notion either of distance or of scenery outside England, cannot recognise that Russia is still really further, much further from Lahore than from London, and with infinitely greater physical obstacles to overcome between them ; think when they hear that a Russian post is only a thousand miles off, that after all, that is not much beyond possible bicycling, and when told that India is bounded by the Himalayas, imagine an indefinite protraction of the Hog's Back, or at the outside, of the Cheviots. Why should they be expected to know? Here is Lord de Manley, a soldier who has served in Canada, and he actually talked of a railway from Astrabad to Herat, as if the two cities were in a European country, and wound up his speech by a solemn proposal that a Consul should be sent "to Central Asia" to watch over British in- terests. He might as well recommend a Consul to Central Africa or South America. It is inconceivable that a man who had ever realised to himself what the expression "Central Asia" means could ever have made such a proposition, but we may depend on it, Lord de Manley is at least as well- informed as the crowds whose vague and ignorant suspicions he embodied in his speech. His grand fear, that of a

railway and water line from St. Petersburg to the Indian frontier, is as absurd as his assertion—which Lord Salis- bury also exposed — that Peter the Great, who died thirty-two years before Plessey, ever thought of the- British Empire in India at all ; but unexposed, it would not have sounded absurd to the thousands who think of a railway as a mere affair of money, derive their notion of a desert chiefly from Salisbury Plain, and if they attempt ta form a notion of a mountain region at all, think of it chiefly as a sort of Switzerland, with food all along the journey.

Lord Salisbury, like all men who have ever had to resist an outburst of Russophobia, is evidently half-bothered and half- amused by the geographical ignorance of the enthusiasts for an anti-Russian war, for later on in the evening, speaking at Merchant Taylors', he again referred to it. He was prepared, of course, he said, to defend direct British interests—as what Eng- lishman is not—but when indirect interests were talked of, he recommended the audience to subject the talkers to a little cross-examination. Otherwise they might "risk the wealth, the prosperity, and the freedom we have around us, and bring all the horrors of war upon Europe, not in pursuit of real honour," but "in order to go to war against a nightmare." Considering all the circumstances, the declaration of the Pre- mier, the wild talk still finding utterance in the Tory Press, and the panics which every now and then stir the City, that was a remarkably emphatic delivery, the more noteworthy be- cause Lord Derby immediately afterwards endorsed it, repeating that "of all British interests the greatest interest is peace ;" but Lord Salisbury made his meaning still more clear by a capital story in illustration :—" I am far myself from seeing many of the apprehensions which I hear around me. Sometimes these apprehensions take an extreme form. Now, I have a colonial friend who has been very much exercised in his mind, and in a very anxious state, in connection with the Cape of Good Hope. He pointed out to me that Russia was in Armenia, that Armenia is the key to Syria, that Syria is the key to Egypt, and that any one ad- vancing into Egypt has the key to Africa. By this link of keys, long drawn out, he shows that the present victories of the Russians seriously menace South Africa. I have done my best to console him, but I feel his anxious feelings are only characteristic of the apprehensions which I constantly hear around me."

We have no doubt the Cape Colonist believed his theory, and remains convinced to this hour that he, and not Lord Salisbury, is the statesman. Why not ? An unopposed army can go anywhere, granted the money, the time, the men, and the motive, and between Erzeroum and Cape Town there is certainly, at present, no army capable of resisting the Russian advance. The Colonist is quite as right as Lord de Manley, and has quite as much reason for opinions which Lord Salisbury, with true oratorical reticence, only stigmatised as "extreme.' In truth they are foolish, but then they are held by great numbers, and therefore, in a country ruled by majorities need just the sort of exposure which Lord Salisbury gave them— an exposure half-serious, half-contemptuous, perhaps in one instance even over-contemptuous. Giving the rein for half a moment to the sardonic spirit which is his permanent intellectual temptation, he hinted that cowardice was the ultimate cause of most of these delusions. "Far be it from me," he said, with a sarcasm which half his audience did not perceive and the other half did not resent, "to deny the existence of fear." It is not fear which is the motive-cause of English Russophobia, but ignorance, or Englishmen would dread Russia at a very different point. The danger of this country—the Russophobists' theory being granted—from Russia on the western is fax greater than on the eastern side. Russia has only to cross the Baltic, con- quer a State not very much stronger than Holland, and not nearly as strong as Turkey, and she would stand face to face with England, ready on the first favourable opportunity to pour swarms of Cossacks into Hull, and to reduce Great Britain to subjection by direct invasion. That is patent, on the map, but no Englishman gives it a thought, just because he is in this instance within the range of his knowledge, is aware that Scandinavia, though weak in population, is nearly unap- proachable by Russia, while quite defensible by England, and aware also that if Russia by some unexpected com- bination of circumstances were seated on the Atlantic, she would be seated just where England is strongest, would not be a bit more dangerous than America, and not one-tenth as dan- gerous as France. It is because Englishmen do not understand their own position in Asia, and how unassailable it is if their sea-road is clear, that they indulge in the wild apprehensions, able to deal with him with invincible effect I"