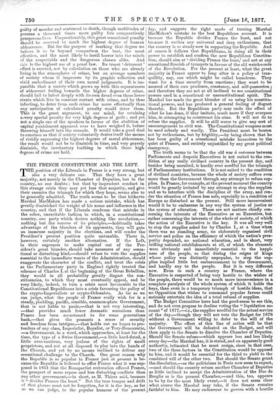 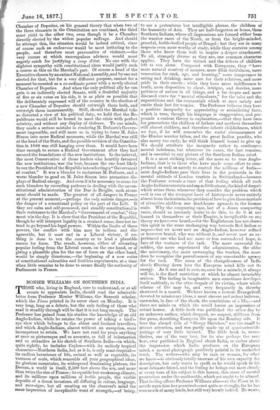 THE FRENCH CONSIITUI1ON AND 111±, LEFT. T HE position of the

Liberals in France is a very strong, but also a very delicate one. That they have a great majority, not merely in the Chamber of Deputies, but in the country, no one doubts ; but that by imprudent conduct in this strange crisis they may yet lose that majority, and give their enemies the triumph for which they hope, seems also to be generally admitted. The truth seems to be that hitherto Marshal MacMahon has made a serious mistake, which has greatly diminished the weight of his name and influence in the country, and that if the Liberals condemn that mistake in the sober, unexcitable fashion in which, in a constitutional country, one party which desires nothing like revolution,— nothing but the success of its principles,—habitually takes advantage of the blunders of its opponents, they will gain an immense majority in the elections, and will render the President's present position quite untenable. There is, however, certainly another alternative. If the Left, in their eagerness to make capital out of the Pre- sident's great blunder, should take measures of any sensa- tional or disturbing kind,—should refuse to vote the supplies essential to the immediate wants of the Administration, should exaggerate the character of the conflict, and treat the crisis as the Parliamentary party in England rightly treated the schemes of Charles L at the beginning of the Great Rebellion, they would in all probability greatly disgust the con- stituencies, to which they must eventually appeal, and be very likely, indeed, to turn a crisis most favourable to the Constitutional Republicans into a crisis favouring the policy of the crypto-Imperialists or crypto-Orleanists. As far as we can judge, what the people of France really wish for is a steady, plodding, pacific, sensible, common-place Government, that is not liable to panic,—that is not very interesting, —that provides much fewer dramatic sensations than ' France has been accustomed to for some generations back,—that gives the peasants a sense of security and freedom from intrigue,—that holds out no hopes to pre- tenders of any class, Imperialist, Royalist, or Tory-Democratic, —a Government, in a word, which approaches, at least for the time, the type of a Swiss Government,—a little hard-fisted, a little over-cautious, very jealous of the rights of small proprietors, and not at all disposed to play into the hands of the Church, and yet by no means inclined to deliver any sensational challenge to the Church. One great reason why the Republic is so popular in France just at present is be- cause the Republic is believed to offer France what it was sup- posed in 1851 that the Bonapartist restoration offered France, the prospect of more repose and less disturbing conflicts than any other government,—in short, as M. Thiers said, because it "divides France the least." But the true temper and drift of that phrase must not be forgotten, for it is the key, as far as we can judge, to the popular humour of the present day, and suggests the right mode of turning Marshal MacMahon's mistake to the best Republican account. It is because the Republic divides France the least, and not because it excites any universal and deep enthusiasm, that the country is so steady now in supporting the Republic. And of course it follows that Republicans, in doing all in their power to establish and confirm the new Republican Constitu- tion, should aim at 'dividing France the least,' and not at any sensational flourish of trumpets in favour of the old watchwords of the Revolution. For the present at least, what the great majority in France appear to long after is a policy of tran- quillity, nay, one which might be called humdrum. They want for a time security from emotions ; they want to be assured of their own prudence, constancy, and self-possession ; and therefore they are not at all inclined to see constitutional powers used in a sensational or unconstitutional spirit. The Marshal has made the great blunder of so using his constitu- tional powers, and has produced a general feeling of disgust thereby. But the Republican party may undo the effect of what he has done, if they imitate, much more if they overpass him, in attempting to counteract his aims. It will not do to refuse the supplies. It will be still worse to give any sort of encouragement to civil war. The Constitutional weapons must be used soberly and warily. The President must be beaten not by enthusiasm, but by frigidity,—by being shown that he has been guilty of a sensational mistake hazardous to the quiet of France, and entirely unjustified by any great political emergency.

The truth seems to be that the old war a outrance between Parliaments and despotic Executives is not suited to the con- dition of any really civilised country in the present day, and besides being unsuited, is hardly ever needful for the triumph of Parliamentary institutions. It is not suited to the condition of civilised countries, because the whole of society suffers even more than the Government through any attempt to refuse sup- plies. In France, for example, at the present moment the country would be greatly irritated by any attempt to stop the supplies and so to interfere with the discipline of the army, and ren- der the situation of France less safe, especially in a condition of Europe so disturbed as the present. Still more inconvenient would it be to embarrass in any way the system of justice or the system of education. These are not matters chiefly con- cerning the interests of the Executive as an Executive, but rather concerning the interests of the whole of society, of which the action of the Executive is the key. It was all very well to stop the supplies asked for by Charles L, at a time when there was no standing army, no elaborately organised civil service and police on the efficiency of which the nation's pros- perity depended, no national education, and in short, very trifling national establishments at all, of which the elements were obviously and immediately essential to the happi- ness of the people, so that during the reigns of kings whose policy was distinctly unpopular, to stop the sup- plies implied little but embarrassment to the Government, and hardly any to the people. But it is very different now. Even in such a country as France, where the Executive is suspected of being very hostile to the wishes of the people, there would be so much more inconvenience in a complete paralysis of the whole system of which it holds the keys, than even in a temporary triumph of hostile ideas, that no Opposition that wishes to command popular favour could seriously entertain the idea of a total refusal of supplies.

The Budget Committee have had the good-sense to see this, and do not even propose to decline voting the "liquidation ac- count "of 1877,—i.e., the supplies needful for the actual service of the day,—though they will not vote the Budget for 1878 without a Government willing to defer to the will of the majority. The effect of this line of action will be that the Government will be defeated on the Budget, and will then apply to the Senate to dissolve the Chamber of Deputies. Should the Senate refuse—which appears less and less likely every day—the Marshal has, it is stated, and on apparently good authority, intimated that he must resign, since in that case, two of the three factors in the Constitution would be opposed to him, and it would be essential for the third to yield to the combined will of the other two. But should the Senate grant the dissolution,—as the politicians in Paris now seem to expect, —and should the country return another Chamber of Deputies as little inclined to accept the Administration of the Duo de Broglie as is the present Chamber,—and this, too, appears to be by far the most likely event,—it does not seem clear what course the Marshal may take, if the Senate remains faithful to him. He may endeavour to govern with a hostile Chamber of Deputies, on his general theory that when two of the three elements in the Constitution are combined, the third must yield to the other two, even though it be a Chamber directly elected by the widest popular suffrage. And should he attempt this, the situation would be indeed critical, since of course such an endeavour would be most irritating to the people, and therefore most provocative of violence,—the very excuse at which unscrupulous advisers would most eagerly catch for justifying a coup d'etat. No one with the slightest sympathy with constitutional ideas would justify such a course as this on the Marshal's part. Of course a head of the Executive chosen by an extinct National Assembly, and by one not elected for that, but for a very different purpose, cannot for a moment be counted as a co-ordinate power with a newly elected Chamber of Deputies. And when the only political ally he can gain is an indirectly elected Senate, with a doubtful majority of five or six votes on his side, it is as plain as possible that the deliberately expressed will of the country in the election of a new Chamber of Deputies should outweigh them both, and outweigh them immeasurably. Still, should the Marshal take so distorted a view of his political duty, we hold that the Re- publicans would still be bound to meet the crisis with perfect sobriety, and without any display of violence. To our minds, they made a serious mistake in rendering M. Dufaure's Govern- ment impossible, and still more so in trying to force M. Jules Simon into more Radical measures, while the Marshal was still at the head of the State, and the possible revision of the Constitu- tion in 1880 was still hanging over them. It would have been time enough to secure a Radical Government after they had secured the foundations of the new institutions. In the interval, the most Conservative of those leaders who heartily favoured the new institutions, was the best, because the one least likely to vex the President of the Republic into selecting a" Government of combat." It was a blunder to embarrass M. Dufaure, and a worse blunder to goad on M. Jules Simon into premature dis- plays of Radical energy. And even if itbe necessary to atone for such blunders by exceeding patience in dealing with the uncon- stitutional administration of the Due de Broglie, such atone- ment should be made. The greatest of all dangers in France at the present moment,—perhaps the only serious danger,—is the danger of a sensational policy on the part of the Left. If they are calm and self-possessed, and steadily constitutional in their resistance to the Marshal's "Government of combat," they must win the day. It is clear that the President of the Republic, though he will interpret legality in a strained sense, does not in- tend to go beyond his legal powers. Within the limits of those powers, the conflict with him may be tedious and dis- agreeable, but it must end in a Liberal victory, if no- thing is done to vex the country or to lend a plausible excuse for force. The result, however, either of alienating popular feeling from the Liberal cause, on the one hand, or of giving a -plausible plea for the use of force on the other hand, would be simply disastrous,—the beginning of a new series of constitutional calamities and fruitless experiments, at a time when little remains to be done to secure finally the authority of Parliament in France.