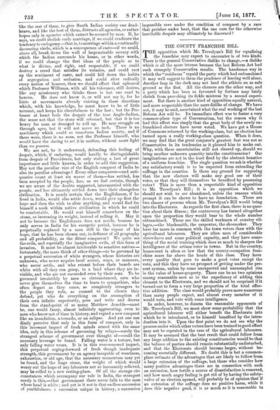 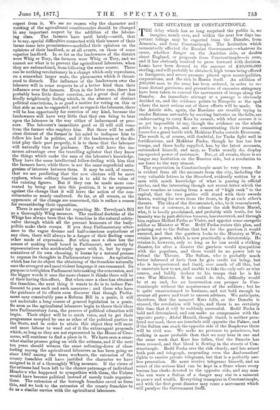 THE opposition which Mr. Trevelyan's Bill for equalising the franchise may expect to encounter is of two kinds. There is the general Conservative dislike to change,—a dislike

which is all the more intense because the last Reform Act had such strangely Conservative results. The handsome way in which the "residuum "repaid the party which had enfranchised it may well suggest to them the prudence of leaving well alone. Another leap in the dark may not land the athlete on as safe ground as the first. All the chances are the other way, and a party which has been so favoured by fortune may fairly shrink from provoking its fickle mistress by a second experi- ment. But there is another kind of opposition equally natural, and more respectable than the mere dislike of change. We have not, it may be said, ascertained what the real working of the last Reform Act will be. Its immediate effect was to foster a very common-place type of Conversatism, but the reason why it had this effect was simply that the great body of the newly en- franchised electors have never voted. We have got a House of Commons returned by the working-class, but no election has turned upon a really working-class question. When it does, we may find that the great' conjuror's greatest feat was not as Conservative in its tendencies as it pleased him to make out. Why, with these uncertainties still not cleared up, should we bring another unknown quantity into the constituencies ? Our imaginations are not in the least fired by the abstract beauties of a uniform franchise. The single question we ask is whether any satisfactory result is to be expected from extending the suffrage in the counties. Is there any ground for supposing that the new electors will make any good use of their votes, or that they will themselves be benefited by possessing votes ? This is more than a respectable kind of opposition to Mr. Trevelyan's Bill ; it is an opposition which we should not wish to see abandoned, unless the reasons which prompt it can be shown to have no foundation. There are two classes of persons whom Mr. Trevelyan's Bill would bring into the Electorate. As regards the first class, there is no ques- tion about their fitness ; the controversy has turned altogether upon the proportion they would bear to the whole number enfranchised. These are the skilled workmen of country vil- lages,—the blacksmith, the carpenter, the shoemaker. They have far more in common with the town voters than with the agricultural labourers. They are often men of considerable shrewdness and some political capacity, and they have some- thing of the social training which does so much to sharpen the intelligence of the artisan voter in towns. But in the country, house-rent is often so low that the county-occupation fran- chise soars far above the heads of this class. They have every quality that goes to make a good voter except the vote, and this they have no prospect of getting under the pre- sent system, unless by some unexpected and unexampled rise in the value of house-property. There can be no two opinions among reasonable men as to the expediency of adding this element to the Electorate, and we should not be surprised if it turned out to form a very large proportion of the total effec- tive addition. The class would probably prove more numerous than many people expect, and almost every member of it would vote, and vote with some intelligence.

In order, however, to disarm the reasonable opponents of Mr. Trevelyan's Bill, we must show some probability that the agricultural labourer will either benefit the Electorate into which he is introduced, or be himself benefited by the intro- duction into it. Upon the first point we do not see why the process under which other voters have been trained to good effect may not be repeated in the case of the agricultural labourers. It may be assumed that the best result that could follow from any large addition to the existing constituencies would be that the balance of parties should remain substantially undisturbed, and that the Electorate should become larger, without be- coming essentially different. No doubt this is but a common- place estimate of the advantages that are likely to follow from a large extension of the suffrage, but those who consider how

many positive advantages there are in connection with such

an extension, how fertile a source of dissatisfaction is removed, and how much angry feeling is got rid of by having the safety- valve of an election opened, will probably be of opinion that if an extension of the suffrage does no positive harm, while it does this negative good, it is as much as it is reasonable to expect from it. We see no reason why the character and working of the agricultural constituencies should be changed in any important respect by the addition of the labour- ing class. The farmers have until lately—until, that is to say, special difficulties connected with their tenure of their farms came into prominence—modelled their opinions on the opinions of their landlord, or at all events, on those of some superior landlord. In so far as the landowners of the district were Whig or Tory, the farmers were Wing or Tory, and we cannot see what is to prevent the agricultural labourers, when they are enfranchised, from following the same course. There can be nothing revolutionary in a change which only reproduces, on a somewhat larger scale, the phenomena which it threat- ened to disturb. The influence of the landowners over the labourer will in some respects be of a better kind than their influence over the farmers. Even in the latter case, there has probably been little direct coercion, and a great deal of that kindly neighbourly feeling which, in the absence of distinct political convictions, is as good a motive for voting on this or that side as can be suggested ; and as regards the labourer, there will be less opportunity for coercion of any kind, because the landowners will have very little that they can bring to bear upon the labourer in the way either of inducement or pres- sure. The labourer's immediate good or ill will still come from the farmer who employs him. But there will be suffi- cient distrust of the farmer in his mind to indispose him to follow his lead in politics, and if the landowners of the dis- trict play their part properly, it is to them that the labourer will naturally turn for guidance. They will have the im- mense advantage over the travelling agitator that they know the things which make the sum of the labourer's knowledge.

They have the same intellectual fellow-feeling with him that the farmers have, while there is not the same superficial anta- gonism of interests between them. It may be said, of course, that we are predicting that the new electors will be mere cyphers, whose solitary function is to add to the value of the existing figures. But if they can be made more con- tented by being put into this position, it is no argument against the change that it will leave the action of the con- stituencies so nearly unaltered. So far, at all events, as the opponents of the change are concerned, this is rather a reason for reconsidering their opposition.

There is another ground for regarding Mr. Trevelyan's Bill as a thoroughly Whig measure. The cardinal doctrine of the Whigs has always been that the franchise is the natural safety- valve through which all the peccant humours of the body- politic make their escape. If you deny Parliamentary utter- ance to the vague dreams and half-conscious aspirations of any class, there will always be a danger of their finding some other mode of expression. But when once a class has the means of making itself heard in Parliament, not merely by representatives who accidentally agree with it, but by repre- sentatives of its own choosing, it learns by a natural process to express its thoughts in Parliamentary terms. An agitation which has for its object the obtaining of the franchise naturally uses the strongest and most violent language it can command. Its purpose is to frighten Parliament into making the concession, and the bigger words it uses the more chance it thinks there will be of their having this effect. But when once a class has obtained the franchise, the next thing it wants to do is to induce Par- liament to pass such and such measures ; and those who have the guidance of its efforts soon discover that though Parlia- ment may conceivably pass a Reform Bill in a panic, it will not undertake a long course of general legislation in a panic. So soon as the agricultural labourers begin to throw their ideas into Parliamentary form, the process of political education will begin. Their object will be to catch votes, and to get their programme accepted by one or other of the political parties in the State, and in order to attain this object they will more and more labour to weed out of it the extravagant proposals which, so long as they are not represented in the House of Com- mons, will continue to find a place in it. We have seen a some- what similar process going on with the artisans, and if the next ten years should witness the same softening-down of class- feeling among the agricultural labourers as has been going on since 1867 among the town workmen, the extension of the county franchise will have justified the character we have assigned to it of a thoroughly Whig measure. If the views of the artisans had been left to the chance patronage of individual MembeTs who happened to sympathise with them the Unions would have become political instead of merely trade organisa- tions. The extension of the borough franchise saved us from this, and we look to the extension of the county franchise to do us a similar service with the agricultural labourers.