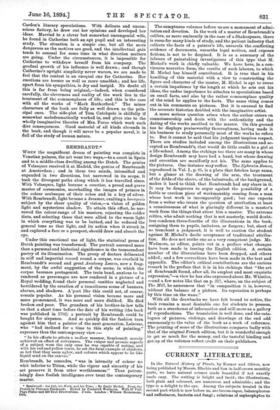 Page 23, 16 June 1894 — REMBRA_NDT.* WHEN the magnificent dream of painting was complete in
Close

REMBRA_NDT.* WHEN the magnificent dream of painting was complete in

Venetian palaces, the art went two ways,—to a court in Spain and to a middle-class dwelling among the Dutch. The genius of Velasquez received it at Madrid, the genius of Rembrandt at Amsterdam ; and in these two minds, intensified and expanded in two directions, but narrowed in its scope, it took the divergent paths along which it has travelled since. With Velasquez, light became a courtier, a proud and grave

master of ceremonies, marshalling the images of princes in the colour arabesque of their robes and in a key of silver. With Rembrandt, light became a dreamer, exalting a bourgeois subject by the sheer quality of vision,—a vision of golden

light and mysterious shadow. To attain this effect, he nar- rowed the colour-range of his masters, rejecting the colder tints, and selecting those that were allied to the warm light in which everything was to be bathed, and he reduced the general tone so that light, and its action when it struck in and explored a face or a prospect, should draw and absorb the eye.

Under this emotional use of light, the statistical prose of Dutch painting was transformed. The portrait assumed more than a personal and historical significance in the transcendent poetry of its illumination. The group of doctors delineated in stiff and impartial record round a corpse, was overlaid in

Rembrandt's second and great Anatomy Lesson, now a frag. ment, by the awful suggestion of the scene, in which the corpse becomes protagonist. The train band, anxious to be

rendered as personages are now rendered in a picture of a Royal wedding, found their personal vanities neglected and bewildered by the creation of a tumultuous scene of banners, alarms, and shadows. A'poet like this could not, of course, remain popular. As his personal vision became more and more pronounced, it was more and more disliked. He died broken and poor. The grandson of his brother-in-law tells us that a short time before the date of his writing (the book was published in 1702) a portrait by Rembrandt could be bought for sixpence. And so quickly did the fashion turn against him that a painter of the next generation, Lairesse, who "had inclined for a time to this style of painting," expresses thus the contemporary view :—

"In his efforts to attain a mellow manner, Rembrandt merely achieved an effect of rottenness. The vulgar and prosaic aspects of a subject were the only ones he was capable of noting, and with his red and yellow tones, he set the fatal example of shadows, so hot that they seem aglow, and colours which appear to lie like liquid mud on the canvas."

Rembrandt, he concedes, "was in intensity of colour no whit inferior to Titian, while the vigour and sincerity of his art preserve it from utter worthlessness." Thus patron- isingly does foolish intelligence ever treat the contemporary master.

The sumptuous volumes before us are a monument of admi- ration and devotion. In the work of a master of Rembrandt's calibre, as more eminently in the case of a Shakespeare, there is room for many kinds of study, and the patient industry that collects the facts of a painter's life, unravels the conflicting evidence of documents, unearths legal notices, and exposes fictions, is not to be despised. It is as a summary of the labours of painstaking investigators of this type that M. Michers work is chiefly valuable. We have here, in a con- tinuous narrative form, the results of such labours, to which M. Michel has himself contributed. It is true that in his handling of this material with a view to constructing the figure and character of the master, M. Michel is apt to rouse a certain impatience by the length at which he sets out his ideas, the undue importance he attaches to speculations based on small facts, and also by the rather commonplace quality of the mind he applies to the facts. The same thing comes out in his comments on pictures. But it is unusual to find the accurate historian doubled with the imaginative artist.

A more serious question arises when the author enters on connoisseurship and deals with the authenticity and the dating of the works ascribed to the master. On this ground too he displays praiseworthy thoroughness, having made it his business to study personally most of the works he refers to. But it cannot be said that his judgment inspires respect. There are studies included among the illustrations and ac- cepted as Rembrandt's, that would do little credit to a girl at a life-school. Among the etchings too there are many in whose design Rembrandt may have had a hand, but whose drawing and execution are manifestly not his. The same applies to the pictures. One instance may suffice. The Ephraim Bonus, reproduced in Vol. L, p. 85, is a plate that fetches large sums, but a glance at the drawing of the arm, the treatment of the folds of the sleeve, of the balustrade, of the background, makes it hard to think that Rembrandt had any share in it. It may be dangerous to argue against the possibility of a feeble or careless piece of workmanship coming from a man whose best work is incomparably good ; but one expects from a writer who treats the question of attribution at least a consciousness of what is glaringly different in a master's work from the things that attest him a master. The extreme critics, who admit nothing that is not masterly, would doubt- less condemn three-fourths of the illustrations in the book, assigning them to pupils, imitators, or forgers ; but, short of so trenchant a judgment, it is well to caution the student against M. Michel's docile acceptance of traditional attribu- tion. He does not strike one as a very competent judge. Mr. Wedmore, as editor, points out in a preface what changes have been made in issuing the English edition. A certain number of the illustrations have been dropped, and others added; and a few corrections have been made in the text and appendix. The editor's critical contributions are the curious remark in the preface that it is in his etchings that "the art of Rembrandt found, after all, its amplest and most exquisite expression,"—a view he has also expressed about Mr. Whistler, —and a few notes like that on p. 317, where, on the subject of The Mill, he announces that "in composition it is, however, without the balance of a picture. Its reputation is perhaps by this time on the wane."

With all the drawbacks we have felt bound to notice, the book remains a most desirable one for students to possess, both as a storehouse of information and still more as a gallery of reproductions. The translation is well done, and the cata- logues of pictures, etchings, and drawings at the end add enormously to the value of the book as a work of reference. The printing of some of the illustrations compares badly with that of the original French edition, but it is wonderful enough to get so much for the money, and the tasteful binding and get-up of the volumes reflect credit on their publishers.