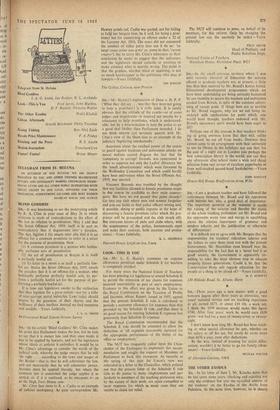 incurred unavoidably as part of one's employment. Evidence to this effect was given by the Union to the Royal Commission on the Taxation of Profits and Incomes, whose Report, issued in 1955, agreed that the present Schedule E rule is calculated to provide a narrower allowance for expenses than that provided by the Schedule D rule, and that there is no good reason for treating Schedule E expenses less generously than Schedule D expenses.

The Royal Commission recommended that the Schedule E rule should be amended to allow the deduction of 'all expenses reasonably incurred for the appropriate performance of the duties of the office or employment.'

The NUT has frequently called upon the Chan- chellor of the Exchequer to implement this recom- mendation and sought the support of Members of Parliament to back this viewpoint. As recently as the spring of this year the Union's view was reiterated in a letter to the Chancellor, which pointed out that the present form of the Schedule E rule fails to do justice to many employments and par- ticularly to members of the teaching profession who, by the nature of their work, are often compelled to incur expenses for which in many cases they are unable to claim tax relief. The NUT will continue to press, on behalf of its members, for this reform. Only by. changing the present law can the anomaly be ended.—Yours faithfully,