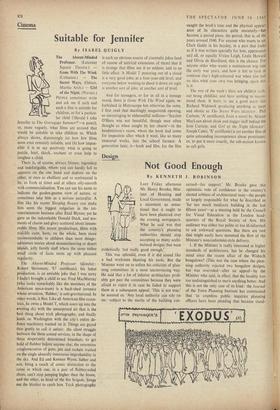 By ISABEL QUIGLY The Absent-Minded Square Theatre.) - Gone With The Wind.

of the Night. (Warner.) PEOPLE sometimes write and ask me if such and such a film is suitable for children, or for a particu- lar child (`Should I take Jennifer to The Greengage Sumpter?'--a poser); or, more vaguely, what films are around that would be suitable to take children to. Which always shows, depressingly (a) how few films seem even remotely suitable, and (b) how impos- sible it is to say positively what is going to puzzle, hurt, shock, enchant or even help to toughen a child.

There is, of course, always Disney, legendary and indefatigable, whom you can hardly fail to approve on the one hand and deplore on the other, at once so ebullient and so sentimental is he, so fresh at times and at others oily-smooth with commercialisation. You can use his name to indicate the garden-gnome view of nature, or sometimes take him as a serious naturalist. A film like his recent Sleeping Beauty can make him seem the biggest vulgarian in the tot- entertainment business after Enid Blyton; yet he gave us the indomitable Donald Duck, and mo- ments of charm and glory scattered about innum- erable films. His recent productions, films with real-life casts, have, on the whole, been more recommendable to children than most things: adventure stories about mountaineering or desert islands, jolly family stuff where the same rather small circle of faces turns up with pleasant regularity.

The Absent-Minded Professor (director: Robert Stevenson; `I.J' certificate), his latest production, is an amiable joke that I was sorry I hadn't brought a child to see. Fred MacMurray (who looks remarkably like the members of the American space-team) is a back-shed inventor whose invention, Tubber,' is anti-gravitational. In other words, it flies. Like all American film eccen- trics, he owns a Model T, which soars up into the evening sky with the unsurprised air that is the best thing about trick photography, and finally lands on Washington with the city's entire de- fence machinery trained on it. Things are guyed (too gently to call it satire): the silent struggle between the three armed services, in the shape of three desperately determined brasshats, to get hold of flubber before anyone else; the enormous conglomeration of guns, jets and rockets trained on the single absurdly innocuous improbability in the sky. And Ed and Keenan Wynn, father and son, bring a touch of comic distinction to the scene in which one, in a pair of flubber-soled shoes, can't stop jumping higher than the house, and the other, as head of the fire brigade, hangs out the blanket to catch him. Trick photography

is such an obvious source of cinematic jokes (and of course of satirical extensions of them) that it is strange that films use it so seldom, and to so little effect. A Model T puttering out of a cloud is a very good joke, at a four-year-old level; and everyone below wanting to shoot it down on sight is another sort of joke, at another sort of level.

And for teenagers, or for us all in a teenage mood, there is Gone With The Wind again, re- furbished in Metroscope but otherwise the same. I first read that dazzlingly magazinish opening, so encouraging to unbeautiful millions—'Scarlett O'Hara was not beautiful, though men often thought so when caught by her charm'—in the headmistress's room, where the book had come for inspection after which it went, like so many immortal works, into the school furnace. A generation later, it—book and film, for the film caught the book's tone and the physical appear- ance of its characters quite uncannily—has become a period piece, the period, that is, of the years around 1940. For anyone who wants to see Clark Gable in his heyday, in a part that looks as if it was written specially for him, appearance and all, or equally Vivien Leigh, Leslie Howard and Olivia de Havilland, this is the chance. For anyone older who wants a reminiscent trip into the early war years, and how it felt to look at someone else's high-coloured war when you had no idea what your own was bringing, again this is it.

The rest of the week's films are childish N, ith- out being childlike, and have nothing to recom- mend them. It hurts to see a good actor like Richard Widmark producing anything as inept and idiotic as The Secret Ways (director: Phil Carlson; `A' certificate), from a novel by Alistair MacLean about cloak and dagger stuff behind the Iron Curtain; and Girl of the Night (director: Joseph Cates; `X' certificate) is yet another film of quite astounding incompetence about prostitutes; or, to put it more exactly, the sub-section known as call girls.