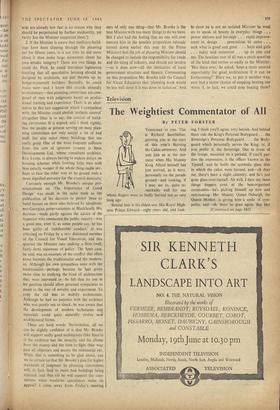 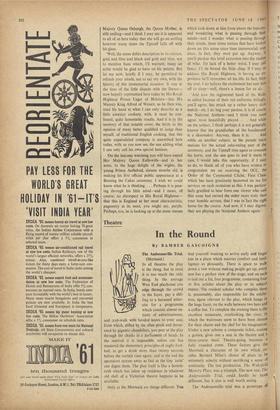 The Weightiest Commentator of All

'Behind him is his eldest son. His Royal High- ness Prince Edward—eight years old, and look- ing, I think you'll agree, very boyish. And behind them ride the King's Personal Bodyguard ... the Sovereign's Personal Bodyguard . . . the Body- guard which personally serves the King, or, if you prefer it, the Sovereign. Out in front of the troops, mounted on a piebald, if you'll par- don the expression, is the officer known as the Tipstaff, and he holds the symbolic glass dish in which the cakes were burned, and—oh dear me, there's been a slight calamity, and he's just gone glass-over-tipstaff. Ah well, I dare say these things happen even at the best-organised ceremonies—he's picking himself up now and remounting—Her Majesty Queen Osburgh, the Queen Mother, is giving him a smile of sym- pathy, and—oh, there he goes again. But Her

Majesty Queen Osburgh, the Queen Mother, is still smiling—and I think I may say it is apparent to all of us here today that she will go on smiling however many times the Tipstaff falls off with his glass.

'Well, the scene defies description in its colours, gold and blue and black and gold and blue, not to mention hues which, I'll warrant, many an artist would be glad to have on his palette. But let me now, briefly if I may, be permitted to refresh your minds, not to say my own, with the history of this immemorial occasion. It was at the time of the little dispute with the Danes-- now happily represented here today by His Royal Highness Prince Lager of Holstein—that His Majesty King Alfred of Wessex, as he then was, tried his hand at what I can only describe as a little amateur cookery, with, it must be con- fessed, quite lamentable results. And it is in the memory of that notable event, the birth, in the opinion of many better qualified to judge than myself, of traditional English cooking, that this quite unparalleled company is assembled here today, with, as you now see, the sun adding what I can only call his own special benison.

'On' the balcony watching you will have espied Her Majesty Queen Ealhswith—and in her arms, to the huge delight of the wights, the young Prince Aethelred, sixteen months old, is making his first official public appearance at a Burning the Cakes ceremony. I wish we could know what he is thinking.... Perhaps it is pass- ing through his little mind—and I mean, of course, no disrespect to His Royal Highness— that this is England at her most characteristic, pageantry at its most, you might say, purple. Perhaps, too, he is looking up at the stone statues which look down at him from above the balcony and wondering what is passing through their minds—and I wonder what is passing• through their minds, these stone statues that have looked down on this scene since time immemorial, ever since, in fact, they were put up. Anyway. if you'll pardon this brief excursion into the realms of what, for lack of a better word, I may call fancy, I'll be bound the little chap, if I may 50 address His Royal Highness, is having an ex- perience he'll remember all his life. In fact, bless my soul, I do believe the excitement has sent hint off to sleep—well, there's a lesson for us alt.

'And now the regimental band of the Reds, so called because of their red uniforms, fittingly' you'll agree, has struck up a rather heavy slow match—oh, I do beg your pardon, it is of course the National Anthem—and I think you must agree, most beautifully played. . . . And while on the subject, I think perhaps it is not generally known that the grandfather of the bandmaster is a shoemaker. Anyway, there it is. . . And while on another subject, as the parade takes stations for the actual cake-eating part 3f the ceremony, and the Tipstaff tries again to remount his horse, and the sun goes in and it starts to rain, I would take this opportunity, if I may so do, to thank all of you who have written to congratulate me on receiving the OCC, I he Order of the Ceremonial Clichd, First Class, which has been graciously bestowed on me for services on such occasions as this. I was particu- larly gratified to hear from one viewer who said that none had earned the order more truly than your humble servant, that I was in fact the right horse for the course. And now, if I may digress, they are playing the National Anthem again.'