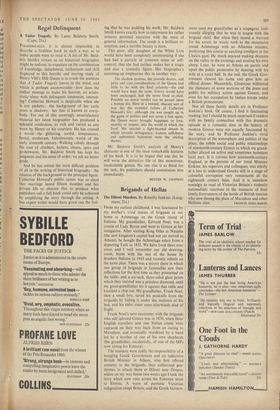 FROM my earliest childhood, I was fascinated by my mother's vivid stories of brigands at our home at Achmetaga on the Greek island of Euboea. My grandfather, Edward Noel, was a cousin of Lady Byron and went to Greece at her instigation. After visiting King Otho at Nauplia (the new kingdom's capital had not yet moved to Athens), he bought the Achmetaga estate from a departing Turk in 1832. We have lived there ever since, and I well remember our old drawing- room, burnt with the rest of the house by drunken Italians in 1943 and recently rebuilt on the same plan. There was a mirror there in which one group of brigands in fustanellas saw their reflections for the first time as they pirouetted on the table; and a six-inch, three-sided glass prism which they insisted was a priceless diamond, until my great-grandfather hit it against that table and knocked a chip out. My grandfather, Frank Noel, then a small boy, saved his penknife from the brigands by hiding it under the mattress of his bed, and his elder sister soon afterwards died of fright.

Frank Noel's next encounter with the brigands who still infested Greece was in 1870, when three English travellers and one Italian count were captured on their way back from an outing to Marathon, and eventually murdered by a band led by a brother of one of his own shepherds (the grandfather, incidentally, of one of the MPs now sitting for Euboea).

The murders were really the responsibility of a bungling Greek Government and an indecisive British Minister in Athens, who first offered amnesty to the brigands, then authorised gen- darmes to attack them at Dilessi near Oropos, where on my way home two weeks ago I took the ferry which now runs across the Euboean strait to Eretria. A wave of patriotic Victorian indignation swept Britain, and the Greek Govern- ment used my grandfather as a scapegoat, ludi- crously alleging that he was in league with the brigand chief. But when they issued a warrant for his arrest. he wisely took to the mountains round Achmetaga with an Albanian retainer, preferring this course to catching smallpox in the Chalcis gaol. He much enjoyed making descents on the valley in the evenings and stealing his own sheep. Later, he went to Athens on parole and upset the public prosecutor by dancing with his wife at a court ball. In the end, the Greek Gov- ernment cleared his name and gave him an official dinner. Meanwhile, Gladstone withstood the clamours of some sections of the press and public for military action against Greece, and even for her occupation by Indian troops under a British protectorate.

Not all these family details are in Professor Jenkins's book. Of course, I find it fascinating reading: but I should be much surprised if readers with no family connection with this dramatic episode at a romantic time in the history of modern Greece were not equally fascinated by the story, and by Professor Jenkins's vivid description of the atmosphere and politics of the place, the subtle social and public relationships of nineteenth-century Greece in which my grand- father played an active and sometimes turbulent local part. It is curious how nineteenth-century England, in the persons of our timid Minister Erskine, his superiors and colleagues, was utterly at a loss to understand Greeks still in a stage of colourful corruption very reminiscent of the eighteenth century here. And it is somehow nostalgic to read of Victorian Britain's violently nationalistic reactions to the massacre of four lonely forerunners of the horde of British tourists who now throng the plain of Marathon and other