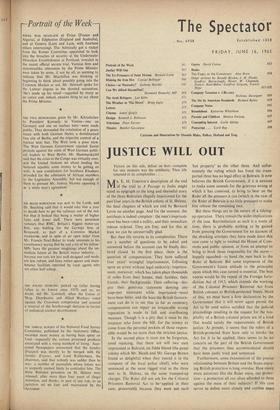 THERE WAS DEADLOCK at Evian (France and Algeria), at Edgbaston (England and Australia), and at Geneva (Laos and Laos, with fourteen others intervening). The Admiralty got a rocket from the Romer Committee appointed to look into the breaches of security at the Underwater Detection Establishment at Portland, revealed in the recent official secrets trial. Various firm and statesmanlike utterances by the Prime Minister were taken by some, if not by all, as seeming to indicate that Mr. Macmillan was thinking of beginning to think about possibly going into the Common Market or not. Mr. Shinwell spoke for the Labour jingoes in the shouted accusation, 'He's made up his mind'—regarded by many as an unfair and, indeed, abusive thing to say about the Prime Minister.

THE TWO MEMORANDA given by Mr. Khrushchev to President Kennedy in Vienna—one on Germany and one on nuclear tests—were made public. They demanded the conclusion of a peace treaty with both German States, a demilitarised free city of Berlin, and the tripartite control of a nuclear tests ban. The West took a poor view. The West German Government rejected Soviet protests against the visits of West German politi- cal leaders to West Berlin. Mr. Hammarskjold said that the crisis in the Congo was virtually over, and the United Nations set about lending the battered republic some money to be getting on with. A new constitution for Southern Rhodesia provided for the admission of African members to the Legislative Assembly, but not enough of them to prevent Mr. Joshua Nkomo opposing it as 'a white man's agreement.'

SIR BRIAN ROBERTSON was sent to the Lords, and Dr. Beeching said that it would take him a year to decide how to get the railways out of the red, but that it looked like being a matter of higher fares and fewer staff. There were persistent rumours that BMC, Britain's biggest motor-car firm, was bidding for the Germ9n firm of Borgward, as part of a Common Market manceuvve, and in spite of an open letter from Mr. Francis Noel-Baker to trade unionists in his 'constituency saying that he and a lot of his fellow- MPs 'have the greatest misgivings about the im- mediate future of the British motor industry. . . because our cars are less well designed and made. are less robust, and have rotten spares and main- tenance facilities operated by local agents who are often half asleep.

THE POUND STERLING perked up (after having fallen to its lowest since 1957) and so, no doubt, did Mr. Gaitskell. when the Union of Shop. Distributive and Allied Workers voted against the Crossman comprOmise and assured a reversal of the Scarborough decision in favour of unilateral nuclear disarmament.

THE ANNUAL REPORT of the National Food Survey Committee, published by the Stationery Office. recorded more money as having been spent on food—'especially the various processed products associated with a rising standard of living.' Asso- ciated Newspapers announced that the Sunday Dispatch was shortly to be merged with the Sunday Express, and Lord Rothermere, the chairman, said that nobody was sadder than he was: a number of journalists whose future was in jeopardy seemed likely to contradict him. The three Bahraini prisoners on St. Helena were released, after more than four years of illegal detention, and thanks. in part at any rate, to an agitation set on foot and maintained by the Spectator.